September 17-18 – National Heritage weekend
During the third weekend of September all French cities celebrate the “Journées du Patrimoine” when for 2 days many historic buildings that are normally closed to the public are opened for guided tours. In Paris this may include government buildings (Elysée Palace, including the Office of the President, the Palais du Luxembourg where the Senate resides, the General Assembly, Town Hall), some embassies or ambassadorial residences, theatres, libraries, or buildings of particular architectural importance both old and new. Initiated by the French Ministry of Culture in 1983, these Heritage Days have become very popular, as witnessed by the long lines that inevitably form at the designated sites, and have since been adopted in many other European countries.
The Palais du Luxembourg was built by Marie de Médicis, mother of king Louis XIII, in the style of the Palazzo Pitti of her native Florence. As a direct result of the French Revolution these "private" royal properties reverted back to the State and are today accessible to the people in whose name they are used.

Bad news this morning (9/23) for the new catamaran ferry in the VIEUX PORT of Marseilles. It appears that ever since the launch of this modern solar-powered ferryboat that connects the north bank of the Old Port to the south bank its performance as a technical wonder has been in doubt. This new ferry, baptised with a singular lack of imagination LE FERRY BOAT by the people of Marseilles, replaced the beloved old César (named after the Pagnol character) that was withdrawn in 2008 after 55 years of ferry service. When the City of Marseilles, with due pride and fanfare, introduced the new ferry in February 2010 it made sure to stress its strong points: solar-powered and non-polluting, silent and fast. The shallow-keeled catamaran would make the 293-meter crossing every 3 minutes (at some 900 feet, the shortest ferry crossing in the world) with up to 45 passengers and free of charge (despite its building cost of 1 million euros). Sounded great, but soon one problem or another would interrupt the ferry service and people started grumbling about this new-fallutin' thing in their Vieux Port. A catamaran is by definition light in weight and susceptible to gusts of wind and when the Mistral blows the Ferry Boat has a hard time keeping course even on a short crossing. It has even been known to become uncontrollable and turn around itself in mid-port during strong winds. The Mistral is here to stay, but the Ferry Boat was withdrawn from service today until a solution can be found. Reminds us of some other "only in Marseilles" stories. 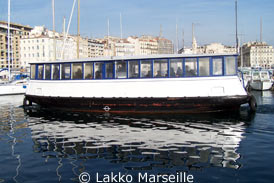 I like to go to literary festivals and have even participated in some. They vary from well-organized fairs with some one hundred writers from different countries, to village fairs with mostly French writers and perhaps a few foreigners whose works are only sold in French. Whether the fairs are big or small, they all have conferences and meet-the-author opportunities which add much to the event.
The village of FUVEAU near Aix organizes a fair every year in early September where a large number of French authors appear together with a few authors from another country. This year it was Spain, two years ago it was America – represented among others by Marilynne Robinson, AM Homes, and my hero Joseph Boyden. They were sitting at the American table behind piles of their books, every single one in French, which caused some confusion when French buyers who did not speak English wanted to communicate with Americans who did not speak French. These book events are very well attended, with hundreds of people visiting the stands and the interviews with selected authors, always in French but with interpreters when needed. Fuveau is a small village and this literary event is entirely run by volunteers, headed by the wife of the mayor, but writers always seem happy to come and often there is at least one celebrity among them. Nevertheless, it remains a French village when it comes to opening hours. Imagine an American book festival that opens on Saturday at 11:30AM only to close at 12:30PM for lunch; then reopens in the afternoon from 2:30 – 6:00PM. “One has to eat,” they shrug, confirming once again that food for the body and soul are equally important here. 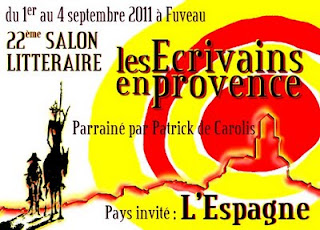 Remember DOMINIQUE STRAUSS-KAHN? (see May blog). He came home to Paris earlier this month, and last night (9/18) he appeared on French television where he promised to “explain himself” during a prime-time interview. Not surprisingly, we learned nothing new but saw a sober-miened DSK who from the beginning insisted that what had happened in his Sofitel suite was inappropriate but had involved no violence and no force. Nevertheless, he called his behavior a moral failing and expressed remorse and regret that he had failed the French people. It was the first time he acknowledged that he had indeed planned to be a candidate for the French presidential election in 2012 where he would have been a strong Socialist opponent to incumbent Nicolas Sarkozy. Though contrite and aware that any future presidential bid was out of the question, he did not rule out some political role where he could “serve the people” in the future. He also left the door open as to a possible set-up in New York. Clearly, he was down but not out.


The TV ratings for this program were the highest ever recorded for an interview, but the French press remained cautious and skeptical in its comments. “Too rehearsed,” “Not convincing” and “Trapped?” were some of the banner headlines the next morning. Something tells me we have not heard the last from DSK. 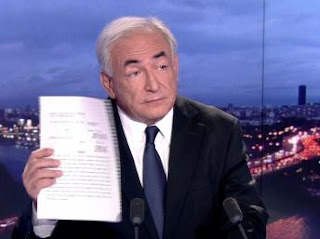 By mid-September most tourists are gone and kids are back in school. Locals flock again to “their” beaches, and we look forward to visiting some of the hot spots along the coast, including SAINT TROPEZ, that are too crowded during the high season. The last week of September or first week of October we often attend the “Voiles de St. Tropez” – a big regatta in the bay of St. Tropez where sailboats from all over the world compete in various classes for an entire week. The boats are beautiful, the crews handsome, and the atmosphere in town festive and fun.
St. Tropez and its annual regatta are featured in Taking Root in Provence; click here for access.
Reminder: Do NOT buy "Taking Root in Provence" together with my earlier book "Ten Years in Provence" whatever Amazon says. "Taking Root" expands on and replaces "Ten Years". See January blog.
Posted by Anne-Marie Simons at 12:37 PM No comments: