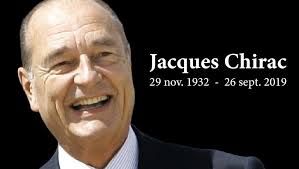 Former French president Jacques Chirac died on September 26th at age 86. After one of the longest political careers in this country - he was twice Prime Minister, twice President (1995-2007), and mayor of Paris for 18 years - he left a mixed legacy of hits and misses. Best known for his strong opposition to the US-led war in Iraq, he was the first French president to apologize for France’s role in the Holocaust. He ended military conscription, improved road safety, and reduced the presidential term from seven years to five. But he also resumed nuclear testing in atolls in the French Pacific, and when his center-right government tried to pass much-needed reforms to combat high unemployment and growing inequalities, the country suffered paralyzing strikes and widespread urban rioting. He made no more attempts at reform.

His term as mayor of Paris was darkened by a scandal of embezzlement and illegal party funding for which, at age 79, after his presidential immunity had expired, he was given a two-year suspended prison sentence - a first for a French president.

Yet, he was the most popular president ever. People fondly remember his jovial personality, his charm, and his visceral need to shake hands. He was the French farmers’ best friend and defender, and their special relationship was mutual. He applied his particular brand of seduction to politicians and voters alike, glad-handing, drinking beer with the common man in local cafés, or eating as much as five lunches in one day on the campaign trail. At the annual Agricultural Fair in Paris, he would happily sample all the farm products offered to him and spend hours talking knowledgeably with farmers, petting cows, picking up and kissing piglets, stroking sheep, goats and all manner of farm life, seemingly feeling in his element.

He was a collector of primitive art, and his brick-and-mortar legacy in Paris is the Quai Branly Museum along the Seine that features indigenous art from Africa, Asia, Oceania, and the Americas. To the man in the street, however, his lasting image is more likely to be that of a warm and expansive man, a bon vivant, an amiable rogue whose duties as president never got in the way of the pleasures of life, and one who mastered the art of being presidential and “just like us” in equal measure.

The country honored Jacques Chirac with a national day of mourning and a funeral service at the Invalides, before a private burial in the family grave, next to his eldest daughter who died in 2016. 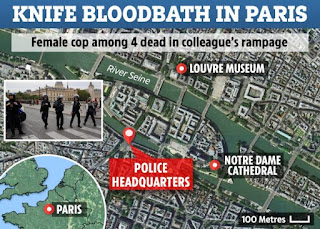 A knife-wielding employee at police headquarters near Notre Dame Cathedral in Paris killed four colleagues and wounded two others, one of them a female administrative assistant who is still in critical condition, before he was shot dead by a police officer. The 45-year-old attacker, Mickaël Harpon, from the French Caribbean island of Martinique, had been employed as an IT worker in the police intelligence unit for 16 years, when on the morning of October 3rd he suddenly went on a killing rampage, using a ceramic kitchen knife and an oyster shucker he had bought that morning. His Moroccan-born Muslim wife told police that her husband had been agitated the day before and that on the morning of the attack they had exchanged 33 text messages in one half hour, all of a religious nature and ending with his sign-off “Allahu Akbar” (Harpon was deaf and communicated in writing). His wife was taken into custody and held for three days but was subsequently released without charges.

A police investigation found that he had converted to Islam ten years ago and had become increasingly radicalized (he would no longer shake hands with his female colleagues). A house search revealed that he had links to the fundamentalist Salafist movement, and a USB key found in his office contained Islamist propaganda videos as well as personal details on twelve of his colleagues. It is not known today whether he passed these personal details on to others, but his coworkers are understandably jittery while investigators try to unravel the data on the USB key.

Although he did not have the highest security clearance, he did have a clearance that allowed access to much information, and the discovery of a radical Islamist working at police headquarters in intelligence caused an outcry and finger-pointing at the police prefect and ultimately at Christophe Castaner, the Minister of the Interior. Speaking from the scene of the crime, Castaner said that Harpon had never shown any sign of radicalization or any behavior that would raise an alarm. This was soon contradicted by colleagues of Harpon who said they had verbally reported their suspicions of his radicalization to their superiors, especially after the 2015 Charlie Hebdo terrorist attack that left twelve people dead to which Harpon responded “Well done!” These reports were never acted upon because they were not in writing, and were not passed on to the top hierarchy.

The attack followed a rare nationwide police strike a day earlier over difficult working conditions, inadequate resources, and rising violence against the police. It should be noted that 52 police officers have committed suicide so far this year (against 35 in 2018). This terrorist attack by one of their own may further sap the police morale, especially at this time of widespread discontent and street protests against President Macron’s Reforms program and a Gilets Jaunes movement that may be hibernating but is not dead.

HOW TO PAY THE GILETS JAUNES BILL?

While President Macron continues to fight his Pension Reform battle, his ministers for the Economy and for Public Finance have been working feverishly to cobble together the 2020 State budget, which is currently making its way through the Senate and contains a total of €17 billion in concessions to the Gilets Jaunes demands (see blog June 2019). This “giveaway,” made up largely of tax reductions to increase purchasing power, includes €9.3 billion in lowered or eliminated taxes to Households and €1 billion in reduced taxes to businesses, as well as a number of measures such as closing tax loopholes, tightening control of unemployment and welfare payments, improved measures against tax fraud and tax evasion, reducing the number of federal employees, etc.

Yet, after all the scratching and scraping there remained a shortfall of €2.5 billion which the State will have to borrow – as it has done every year since 1974, except for the year 2018 when Macron finally managed to keep public debt at 2.8% of PIB, i.e. within the 3% limit set by the European Union. So, back to the old bad habits and a possible slap on the wrist from the EU Commission which will likely show clemency in the face of the extraordinary challenge of the Gilets Jaunes movement that led to a serious social crisis and nearly brought the government to its knees. In the end, the final largesse of the government was a choice between extinguishing the fire or letting the house burn down.

Fortunately, France is currently borrowing at very low or negative interest rates, and a recent one-billion-euro settlement from Google to the French government could not have come at a better time.

The “Bouquet of Tulips” that Jeff Koons offered to the City of Paris to commemorate the victims of the 2015 terrorist attacks was finally unveiled in the gardens of the Champs Elysées between the Petit Palais and the Place de la Concorde. Public objection to the initial placement on the Esplanade du Trocadéro held up the installation for two years. 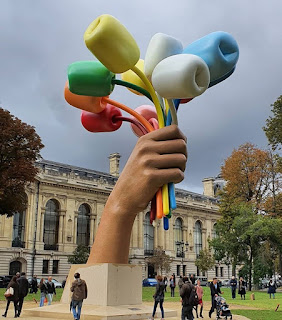 The giant metal sculpture, 41 ft. high and weighing 67 tons, was not universally appreciated. It soon turned out that Koons had only donated “the idea,” not the actual construction and the materials, and financing was difficult to find. When private donors raised the funds, Koons pitched in €1 million when it went over budget. 80% of the royalties from associated commercial products is meant to go to the victims of the attacks, 20% to the sculpture’s maintenance. Although Anne Hidalgo, mayor of Paris, thanked Koons warmly for “this magnificent symbol of freedom and friendship,” a survey by art magazine Le Quotidien de l’Art of readers, gallery owners and collectors showed that 98% disapproved of the project. A lukewarm welcome at best.

In her response to the controversy, mayor Hidalgo cleverly said that vibrant debate, particularly over art, was a hallmark of Parisian identity. “Everything is big in Paris – emotions, controversies, and the traces that art leaves in our lives.” I might add that it takes less that a controversial piece of art to set Parisians off against each other, the government, foreigners, “Brussels” and any number of perceived threats to their superiority. [Yes, I am generalizing, but… just sayin’.] 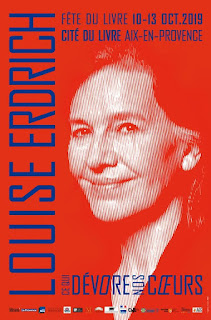 This year's guest of honor at the annual Fête du Livre of Aix-en-Provence was Louise Erdrich, American author best known for her writing on American Indians and their fading and threatened culture. Amerindian herself, Erdrich was born to a German father and an Ojibwe Indian mother, and is a member of the Turtle Mountain Chippewa nation of North Dakota. In the tradition of William Faulkner, she shines a light on today's Native Americans so long ignored in literature, and has been compared to Toni Morrison and Arundhati Roy as a woman writer dedicated to making the voice of her heritage heard worldwide. Her seventeen novels to date have garnered many prizes, including the National Book Award in 2012 for The Round House, and she has received the Library of Congress Prize for American Fiction as well as the Dayton Literary Peace Prize.
German actress Hannah Schygulla (Werner Fassbinder's muse) gave a reading from Erdrich's work.

Louise Erdrich was accompanied by Lisa Halliday who rose to instant fame in 2018 with her debut novel Asymmetry, and by Nurrudin Farrah, exiled Somali writer currently living in South Africa, whose novels and plays have been recognized with a number of international literary prizes in Italy, France, Germany, Sweden, as well as the US-based Neustadt International Prize for Literature and the Lee Hochul Literary Prize for Peace in South Korea.

As always, it was a fascinating multi-cultural event, highlighting the importance and the limitless reach of art, more than ever needed today in our divided and conflict-ridden world. 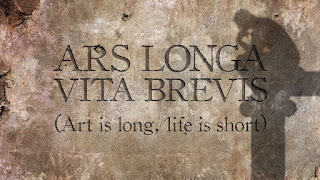 Posted by Anne-Marie Simons at 1:20 AM No comments: