June 2016 was a memorable month in France, and not for the best of reasons.

It started with severe floods that caused great hardship and extensive material damage to numerous départements after weeks of incessant rain. Four lives were lost and 24 people were injured. In Paris the Seine rose to a high of 6.10 meters, second highest ever measured, overflowing its banks, closing many roads and underground garages, as well as the Louvre and Quai d'Orsay museums which hurriedly moved their treasures from lower floors. The famous Zouave, the statue flanking the Pont de l'Alma by which Parisians measure the crest of the Seine, was immersed nearly up to his waist. The Chateau de Chambord became an island, inaccessible to visitors, and many small towns and villages were cut off by floods, forcing the evacuation of all inhabitants.

On June 10th, before all floodwaters had receded, the month-long Euro 2016 football championship opened at the Stade de France north of Paris (with a four-day strike of Air France/KLM pilots starting on opening day) amid heavy security and a terrorism threat. French security forces (police, gendarmes and military), on red alert throughout the continuing state of emergency, are being assisted by a contingent of German riot police as well as private security guards at some of the match venues in ten different host cities.


It was not enough to prevent bloody clashes between English and Russian football fans in Marseilles, when Russian hooligans took on their drunken English counterparts in the Old Port area where things quickly turned violent and riot police had to use dogs, tear gas and water cannons to break up the fights. Bottles, rocks, and chairs were used as projectiles and opponents were viciously beaten when caught. In all, 35 people were injured, and three English fans remain hospitalized in serious condition, one with brain damage. The violence boiled over into the match (score 1-1), where Russian fans threw flares and charged into the English section, sending the English fleeing. Witnesses have reported that the Russians were very well organized and clearly came to fight, easily overwhelming the English who had been drinking all day prior to the evening match. Police detained 63 people, three Russians were given jail sentences for violence against English fans and 20 were expelled from France. Police were given the power to ban alcohol at and near future high-risk matches. 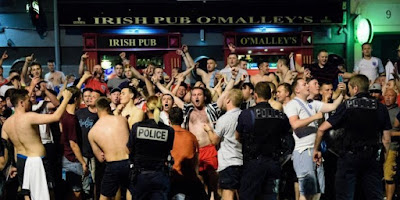 Following these disturbances the UEFA has handed Russia a suspended disqualification from the Euro 2016 and a €150,000 fine for "the offences of crowd disturbance, use of fireworks and racist behavior inside the Velodrome stadium in Marseilles" on June 11. Any further incidents of crowd disturbance inside the grounds at future Russian matches will see the suspension lifted with immediate effect of the disqualification.

It is a sad day when a popular sports contest is completely overshadowed by violent incidents that cause serious bodily harm and leave a trail of destruction, while extensive media coverage of this violence displaces the reportage of the actual matches. Moreover, an overworked and thinly stretched police force could have been put to better use than battling overheated crowds of fans in Marseilles for three days in a row, especially during the state of emergency.

Aside from the frequent charge of police brutality at instances of crowd control, the police corps has been badly affected by a recent murder in their midst. On June 13, Jean-Baptiste Salvaing (42), a young police commander in the Yvelines area near Paris, was stabbed to death in front of his own house by an Islamist extremist. The attacker then entered the house and killed the officer's partner, Jessica Schneider (36), an administrative officer, by cutting her throat, leaving their 3-year-old son unharmed. Before being shot to death by police several hours later, the terrorist, 25-year-old Larossi Abballa, posted a message on Facebook saying he had killed the infidel police couple by knife during Ramadan, as instructed by ISIS to whom he had pledged allegiance. Abballa was known to police and had been radicalized in jail, but he appeared to pose no immediate threat according to the national-security police who had him under surveillance.

A deeply shaken but ramrod contingent of police officers attended the homage to the victims at the Préfecture in Versailles where President Hollande awarded them a posthumous Légion d'Honneur, calling them everyday heroes who sought no glory and simply did their duty in dangerous times. A number of red-eyed colleagues of the popular couple were overcome by emotion and had to be led away. President Hollande, aware that some 500 officers have been injured in the confrontations of the past months and recognizing the vulnerability of police in the face of today's extremists, declared that henceforth police officers will be allowed to keep their weapon when off-duty and that new rules will guarantee anonimity to those carrying out arrests. 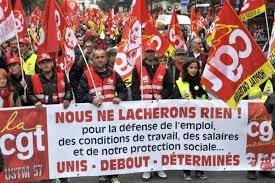 This tragedy did not stop the CGT union from holding another demonstration in Paris on June 14th against the new labor law that is currently winding its way through the Senate for a final vote on July 25th. After costly actions such as blocking oil refineries and nuclear-energy centers in May, the CGT, joined by six other labor unions, claims that one million people participated this time, while local authorities put the number closer to 80,000. As always, outside rioters infiltrated this march which degenerated quickly into violent attacks against government buildings, banks, restaurants and anything with large windows at street level, including the Necker Children's Hospital where 15 bay windows were shattered and extensive damage was done to the ground floor. This time, a red line had been crossed and the hospital filed suit.

Even though most violent acts are committed by hooligan-type rioters ("casseurs") who mingle with protest marchers for the sole purpose of destroying property and provoking the police, it is near impossible to charge them with specific acts since they are careful to cover their heads with hoods or balaclavas. Following the hospital incident the government blamed the march organizers for allowing hooligans to join, while the organizers blame the government whose job it is to police these events. In the June 14 CGT march, 29 police officers and 11 demonstrators were injured, while 18 rioters, including two Germans, were arrested and all but two of them sentenced.

Given the increasing violence and the hostility of the demonstrators toward the police, the government then threatened to ban any future demonstrations if public safety cannot be guaranteed. The announcement was met with outrage from the extreme left at this denial of democracy, while the right responded mostly in favor. A private meeting at the Elysée Palace between Labor Minister Myriam El Khomri and CGT leader Philippe Martinez failed to bring the parties any closer, and Martinez immediately called for two more days of demonstrations on June 23 and June 28. In response, Minister of the Interior Bernard Cazeneuve proposed a "static" demonstration at the large Place de la Nation which is easier to control, but the CGT considers that an interference with their rights and counter-proposed two somewhat shortened marches through Paris.

[FLASH:  The government just announced that the permit for tomorrow's march has been withdrawn and the demonstration prohibited for lack of police.  6/22 at 11:00 A.M.]

Driven by their sense of entitlement and their perceived power over a weak government, the strikers want what they consider their due, regardless of a difficult context. No state of emergency, no Euro 2016, no threat of terrorism or an extenuated police force will deter them.
This is no negotiation, it is a temper tantrum.

As the upcoming Tour de France looms (July 2-24) with its attendant security challenges, the Air France/KLM pilots have just announced another four-day strike for June 24-27.  Sigh...

Posted by Anne-Marie Simons at 2:36 AM 3 comments: