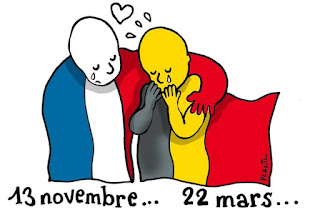 On Tuesday March 22nd, my husband and I were scheduled to take an evening flight from Brussels to Marseilles, missing by hours the terrorist attack on Zaventem airport where two suicide bombers blew themselves up in the crowded departure hall earlier that day. About an hour later a bomb exploded on a Metro train near the European Union headquarters in the city center. In all, 35 people were killed and more than 300 wounded. The attack was claimed by the Islamic State (IS), presumably in reprisal for the arrest of Salah Abdeslam, implicated in the November 13 attacks in Paris (blog 11/21/15), who was finally tracked down and arrested in Brussels a few days earlier after four months on the run.

Fortunately we were alerted in time to try to catch a return flight from Amsterdam but found no available seats until early the next morning. Having already gone through a very strict security check we decided to stay overnight at a hotel inside Schiphol airport, and spent much of the afternoon in search of a quiet corner to pass the time. A sign drew us to a Meditation Room where we found three men kneeling in prayer on mats facing Mecca, doing their five-times-daily religious duty. The room did not seem to serve any other purpose and we withdrew quietly but unable to resist a comparison between this private faith and the murderous fervor in Brussels, all in the name of the same religion.

As we try to absorb yet another deadly attack, close to home and committed by people living among us, our initial shock and sadness quickly mix with anger and impatience. What is being done about this? Weren't the authorities supposed to find ways to prevent this and work together to ensure our safety? Yes, they were, and no, they didn't.

Immediately following the airport bombing the Belgian government put the city on highest alert, which includes a total shutdown of all transportation systems. Yet, when a Metro car exploded an hour later the shutdown order had not yet gone out.

Belgium has the highest number of home-grown jihadists in all of Europe who were trained in Syria or Iraq, and the Brussels neighborhood of Molenbeek houses a well-organized radical islamist cell that planned and executed the November attacks in Paris. Yet, after those attacks, Molenbeek resident Salah Abdeslam, one of the participants, managed to return to his Brussels base where, despite a massive manhunt and a total lockdown of the city, he remained undetected for four months.

Another disturbing fact:  a day after the Brussels airport attack President Recep Erdogan of Turkey revealed that airport bomber Ibrahim Bakraoui had been arrested last July near the Syrian border and expelled from Turkey on suspicion of being a radical militant. Turkish authorities alerted their Dutch and Belgian counterparts but this alert was not passed on by Belgian diplomats to their security forces at home. The alert was later found in a pile of mail on an officer's desk in Brussels.

Belgian-born Ibrahim Bakraoui had a criminal record and in 2010 was sentenced to nine years in prison for shooting at police in an armed robbery. He was released on parole after having served less than half of his sentence. Since then, he has been able to travel abroad and was never pursued for skipping parole.
Khalid Bakraoui, Ihrahim's brother, blew himself up in the Brussels Metro, killing 20 people and injuring more than 100. He too was known to police for criminality but not suspected of having terrorist links. However, Interpol had issued a "red notice" for Khalid that stated that Belgian authorities wanted him in connection with terrorism, which those authorities seem to deny today. Both brothers, it turns out, had direct connections to the Paris terrorists.

The second airport bomber has been identified as Najim Laachraoui who was born in Morocco but raised in Belgium. He had studied electromechanical engineering in Brussels and was known to be an IS bomb maker. He may have acquired those skills in Syria in 2013. His DNA was found on explosives used in the Paris attacks and in an apartment in Brussels where bomb-making materials were found in December.

Following these revelations the Belgian ministers of justice and of the interior offered their resignation, which was refused by the Prime Minister. A parliamentary inquiry will look into the missed clues and intelligence failures.

It is not surprising that terrorists choose Belgium to prepare their attacks. According to Peter Müller of Der Spiegel, they do so because it is easy. "When it comes to the country's security apparatus, Belgium is essentially a failed state," he writes. Brussels has a Byzantine structure of 19 municipalities and six police departments. Add to that a certain rivalry between French- and Flemish-speaking politicians and you have a recipe for inefficiency.

As always, poverty and a lack of integration of the immigrant population play their part in creating an unemployed, disenchanted, younger generation that is open to radicalization, especially in neighborhoods like Molenbeek and Schaerbeek where jihadist cells have been able to develop and flourish undisturbed.

Similarly, France's notorious cités, those suburbs of towering apartment blocks with a large population of immigrants, high unemployment and widespread delinquency, are fertile ground for islamist recruiters. This is where some of the Paris attackers holed up and were sheltered until they fled or were killed. After those November attacks, investigators found that a number of the terrorists had traveled from France to Syria, crossing back into France without a problem. Securing Europe's open borders seems near impossible, and only now are EU governments beginning to share intelligence with foreign services. Up to a point.

The Passenger Name Record (PNR), for instance, widely used in international air travel, is still not adopted in Europe. Ever since it was first discussed in the European Parliament in 2011, the use of a PNR has repeatedly been rejected by the European left (socialists, liberals and greens) on fears of invasion of privacy. After the Paris attacks in November, a furious Bernard Cazeneuve, France's Interior Minister, took his own party representatives to task and insisted that the PNR issue be put back on the Agenda of the European Parliament where, in the plenary session of March 7th, the measure was voted down again. Even though three of the French socialist deputies had finally voted in favor, four did not attend and five abstained.

In a hopeful sign after the Brussels tragedy, six suspected terrorists have been arrested this past week in Belgium, two in Germany and one in France. The arrest in France has led to the discovery yesterday of a French national in Rotterdam who, Dutch police say, was planning to commit a terrorist attack in France. Close cooperation between European police forces paid off and in one week's time managed to make a significant dent in the terrorist network in Europe.

Meanwhile, the planned March Against Fear on Easter Sunday in Brussels was cancelled by local authorities who said their thinly stretched police force could not ensure the crowd's safety. Nevertheless, people spontaneously drifted to the Place de la Bourse where masses of flowers and candles had been left in homage to the victims. Sadly, the respectful gathering of mourners was rudely interrupted by about 100 hooligans and extreme-rightists who trampled the flowers and shouted anti-immigrant slogans. The police used water canons to disperse them. It was a sickening scene.

Two days after the Brussels attacks an Extraordinary Meeting of the EU Ministers for Justice and for Security was held in Brussels "to set out measures to enhance our collective capacity to combat terrorism". About time, methinks. Given the cautious tone, however, I will allow myself some doubt.

If ever our fragile European Union needed a strong leader, it is now. One captain in command of the unwieldy ship of 28 nations, who speaks with one voice for the greater good and has the wisdom and courage to make the difficult choices.

If it were possible, Pope Francis would be my candidate.