Newly elected French president Emmanuel Macron had barely had time to appoint the members of his government late last month before he left for a marathon of international meetings with his G7 counterparts in Taormina, Sicily, and with his NATO partners at their summit in Brussels. A baptism by fire, you might say, but one that he passed with flying colors and with positive reports in the press. 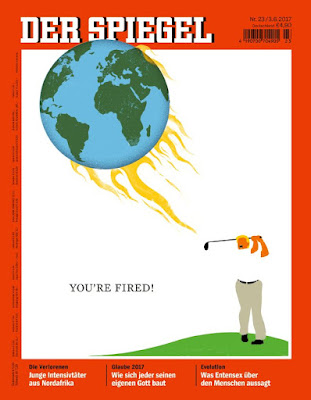 In fact, rather much of that press coverage went to Donald Trump who attended these same meetings and drew a great deal of attention to himself by his oafish behavior and signs of unpreparedness. When shortly after his return to Washington he announced that he would withdraw from the  COP21 Paris Agreement on Climate Change, foreign leaders and the international press were unanimous in their condemnation of this decision and dropped all pretense of political correctness and diplomacy in doing so. In Germany, an exasperated Angela Merkel called Mr. Trump an "unreliable partner in international treaties;" French president Macron went on live television to say "On climate there is no Plan B because there is no Planet B" and launched the slogan "Make Our Planet Great Again," while former French Foreign Minister Laurent Fabius, who presided over the December 2015 Agreement's signing, called Donald Trump's decision "a major fault against humanity and against our planet." French astronaut Thomas Pesquet, who had just returned from a six-month space mission, agreed and said that he had personally observed the earth's fragility to global warming, calling Trump's withdrawal from the Agreement "irresponsible." Germany's Der Spiegel published a shocking magazine cover and an article headlined: "Donald Trump's Triumph of Stupidity." Clearly, outside his clique of diehard supporters at home, President Trump's decision met with universal disapproval, and the powerful US now finds itself on the sidelines in the smelly company of fellow non-signers Syria and Nicaragua. 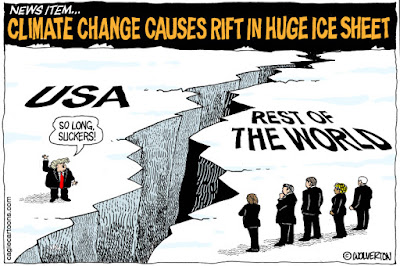 It's a sad day when the president of the United States is mocked by the entire world and is no longer taken seriously by anyone, when respectable magazines run covers such as "Liar-in-Chief" (Time) and when in a few short months this president managed to severely damage his country's reputation all over the world and undermine the respect it has always commanded. It goes without saying that Donald Trump's actions concern all of us, that pollution does not stop at America's borders, that unhealthy air and foul water do not make America great again, and that international agreements are not to be dismissed like a candidate on his reality TV show The Apprentice. "Unfit for the highest office" does not begin to describe Donald Trump. 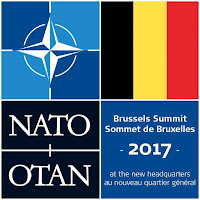 If a point can be made for Europe taking on a bigger share of the NATO defense budget, no reasonable argument can be made for quitting a hard-fought climate agreement signed by 195 nations for the benefit of all. Fortunately, European leaders have united as never before in their commitment to adhere to the COP21 goals, joined by such major polluters as China and India. But the damage is done, and with his stunning arrogance and ruthlessness Trump has alienated all his European allies and isolated America to a desert island of blind conceit and ineptitude where this alpha male can rule his pack of chimps until they run out of coconuts or the rising oceans mercifully engulf them.

MEANWHILE, IN THE ADULT WORLD…

A novice president of an altogether different sort is Emmanuel Macron who in less than two months since his election in May has not only won early kudos from world leaders but whose brand-new EM party managed to win a vast majority of the parliamentary seats in the legislative elections on June 11th and 18th. It's a remarkable achievement of a party that did not even exist a year ago, in a country where endless debate is par for the course and actual reform is considered impossible. Let's see if Macron's government, half of them women and one-third of the entire Cabinet coming from civil society rather than politics, can do better. Hopes are high.


In the meantime, as tourists and vacationers are flocking southward and invading our mist-cooled terrasses, and as our first heat wave (36°C) inevitably dulls our interest in the world's turmoil, we turn our attention to the pleasures of the Opera Festival in Aix-en-Provence which opened last week with its first Master Class. Even for those who don't care for opera, the pleasures of this opera season are many, as I described in an article that appeared in the excellent PROVENCE POST on May 29, 2017 which you can read by clicking here.

Enjoy your summer and don't worry too much about the Yellow Peril in the US. This too will pass, and as Johann Strauss said in Die Fledermaus: "Glücklich ist wer vergisst was doch nicht zu ändern ist" (Happy is he who forgets what he cannot change anyway). 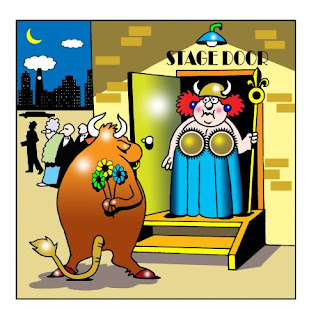 So climb into your hammock with a book and a cool drink, and relax.
I'll see you next month.