THE EUROPEAN UNION, THE NETHERLANDS, FRANCE

Last Saturday, 27 European heads of state met in Rome to celebrate the signing, 60 years ago, of the Treaty of Rome that established the European Economic Community (EEC) with six member States. This created a common market for the free flow of goods, services, capital and people throughout its member countries, and was the first chapter in the development of the European Union (EU) which today counts 27 member States (post Brexit). It has not always been a smooth road and has required a number of amendments and sub-treaties on the way to becoming the complex juggernaut it is at present. Often criticized for moving slowly, the EU colossus nevertheless is making steady headway in the turbulent waters of a multi-layered Europe, and its founders' goals remain as valid today as they ever were.

Just as the NATO pact was intended as a shield against foreign aggression, the EEC created a bulwark of countries forming a single market for greater economic strength. These international agreements have been essential to the peace and prosperity Europe has known for more than 60 years, but are threatened today by the Brexit vote and by President Trump's announced intention to cut America's financial contribution to NATO and his encouragement of other countries to leave the European Union so as to diminish its economic power.


In the same room where the original treaty was signed in 1957, EU Commission President Jean-Claude Juncker responded to these threats by recalling the original signers' pledge to work for the "ever-closer union among the peoples of Europe" and spoke for all the signatories when he said: "We solemnly renew our vows and reaffirm our commitment to our undivided and indivisible union. Only by staying united can we pass on to future generations a more prosperous, a more social and a safer Europe." This was true in 1957 and it is true today.
May the message be shared widely across a Europe weakened by Brexit, and serve as a warning against rising populism.

One loud voice that has been thundering against the EU is that of Dutch anti-Islam politician Geert Wilders, a right-wing populist who is in favor of leaving the EU. This admirer of Donald Trump wants to close Holland's borders to Muslims, shut down mosques, and ban the Koran. I was in Holland during the general elections on March 15 and was struck by the fact that there were practically no billboards or posters of political candidates and that the mood was calm and sober. I heard no rabid speeches in the days before nor great jubilation after the election; just a sigh of relief at the defeat of Wilders who, riding on a wave of populism, had been running neck and neck with Prime Minister Rutte almost until election day. Sober, solid and down-to-earth Holland saved the day, and hopefully set an example for France...

... where presidential elections will take place in late April and early May, and where far-right leader Marine Le Pen, Wilders's soul mate, is expected to win the first round. If elected, she would immediately leave the European Union and the euro, close French borders to immigrants, revoke French citizenship from Muslims with dual nationality, and pretty much follow Wilders's script. His defeat in Holland was greeted with joy in France and seen as a welcome check in the rise of the extreme right.

French polls have been predicting that Le Pen will lose in the second round but nobody counts her out yet, as her opposition is fractioned and in turmoil. Several of her fellow candidates are under investigation, first among them conservative front-runner François Fillon, former Prime Minister, who looked like a shoe-in until the revelation of alleged fictitious employment of his wife and two children as well as expensive gifts from wealthy donors tarnished his image of Mr. Clean and completely overshadowed his political platform. When the preliminary judgment by a financial fraud panel failed to clear him of the charges and concluded only that further investigation was necessary, Fillon refused to withdraw but his chances of winning have been badly hurt.

Emmanuel Macron, former Economics Minister and the current front-runner, is being investigated over a costly visit to the 2016 electronics trade show in Las Vegas with members of his Ministry that was organized without a call for bids. An aide explained that Business France, a unit of the Economics Ministry, had chosen the Havas PR company to organize the trip without seeking other bids and that this investigation has nothing to do with Macron himself.


Marine Le Pen also faces several investigations over campaign financing and misuse of funds at the European Parliament. She has refused to reply to a Summons from judges in the parliamentary case while she is campaigning. She has the support (and possibly financial backing) from Vladimir Putin who received her at the Kremlin last week.

As soon as President Hollande announced that he would not run for a second term, Manuel Valls resigned as Prime Minister in order to run for the presidency himself (he lost against left-wing candidate Benoît Hamon). Interior Minister Bernard Cazeneuve then replaced Valls as Prime Minister, and Deputy Bruno Le Roux was appointed to replace Cazeneuve as Interior Minister. It was another reshuffle in the Hollande government which has known many, and should have been the last before the change of government in May. Alas, Le Roux lasted little more than three months and was forced to resign over the fact that he had employed his two school-age daughters of 15 and 16, respectively, as Parliamentarian aides during school vacations. Not much evidence could be found for work done for the benefit of the Parliament except for paychecks totalling 55,000 euros. In the wake of the Fillon fictitious employment scandal, Le Roux was forced out and was replaced by Matthias Fekl, who in September 2014 had replaced Thomas Thévenoud, then newly-named State Secretary for Exterior Commerce who, after only nine days on the job, had to resign over years of unpaid taxes. (His excuse: "I don't like paperwork").
Are you still with me?

One may well ask whether President Hollande has ever heard of background checks, but that's a moot point by now. Without a lasting legacy, he will soon be forgotten. A recent article in daily La Libération with the headline François Hollande, Résident de la République, depicted a man isolated in his gilded cage, surrounded by all the glitter and ostentation of France's past glory, who is keenly aware of his exalted position and seemingly in need of all the trappings that come with it as if he still does not quite believe that he made it to the top. Even when he invites journalists for a chat over a cup of coffee, he receives them in these formal surroundings where a uniformed lackey cries out Le Président de la République! as he enters the room to join his guests. 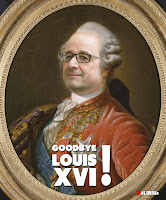 With a tinge of pity we will soon say goodbye to this well-meaning but ineffective president, who may well miss his shiny palace more than we will miss him.

Posted by Anne-Marie Simons at 10:57 AM No comments: