The G-20 summit meeting that was held in Cannes November 3-4, 2011, had a touch of drama. This meeting, like all others of this caliber, was prepared well in advance with a well-defined agenda. But the euro-crisis interfered and a good part of the agenda was supplanted by the problem of Greece's sudden announcement on the summit's eve of a planned referendum on the question of whether or not it should stay in the Euro zone. Taken by surprise, "le couple Merkozy" (Merkel and Sarkozy) fiercely attacked Greek Prime Minister Papandreou for highjacking the G-20, and within days the referendum was dropped. Nevertheless, the acute difficulties of the eurozone took center stage and led the foreign leaders to conclude that "Europe must get its house in order" before any consideration can be given to financial assistance. This item, as well as the financial transactions tax proposed by Sarkozy, were deferred to next February -- a rather disappointing result for president Sarkozy who chaired this summit meeting and is facing re-election in 2012. 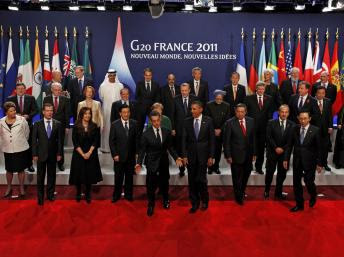 As if the Greek problem were not enough, shortly after the Cannes summit a new convulsion shook the eurozone, this time coming from Italy where Silvio Berlusconi finally ran out of tricks to hang on to power and lost a vote of confidence in Parliament that led to his resignation. The street received this news with a spontaneous explosion of joy and I am left with the indelible image of a full-throated choir outside the Parliament building singing Haendel's Halleluyah as the black limousine with a somber-faced Berlusconi drove away into the night, pushing through a furious crowd holding aloft signs of
Ladrone! and Buffone! 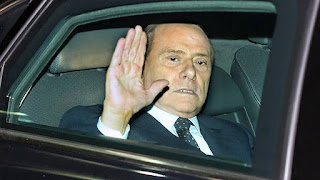 Next - bunga-bunga parties with pal
Putin in their adjoining estates in Sardinia? 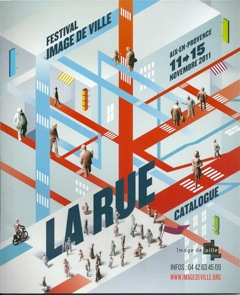 From 11-15 November 2011, Aix-en-Provence held its annual Festival Image de Ville which features architecture in one form or another in the presence of a "star architect." This year the subject was "La Rue" and what it represents in today's city, and the big architect was Christian de Portzamparc, noted urbanist and the first Frenchman to win the prestigious Pritzker prize (1994). Among his best-known projects are the Cité de la Musique in Paris, the Luxemburg Philharmonic Hall, the LVMH Tower in NYC, the new city of Almere in Holland, the Cidade de Musica in Rio de Janeiro. During four days of conferences and debates no less than 75 films (documentaries, shorts and full-length commercial films) were shown, all of which had a connection to The Street. The selection was wide and varied, including the recent Le Havre by Finnish filmmaker Aki Kaurismäki (2011), M by Fritz Lang (1931), La Zona by Mexican Rodrigo Piá (2007) and West Side Story by Robert Wise and Jerome Robbins (1961). Seeing and hearing West Side Story again made me a little "homesick" - so unmistakably American, from the vibrant score by Leonard Bernstein to the fabulous dances on Manhattan's streets - no-one else could have made this movie.


Strauss-Kahn deeper and deeper in merde


The DSK saga continues. As his future darkens under new sex allegations in the Carlton Hotel prostitution scandal that is currently being investigated in France, DSK is on the defensive again. Several French newspapers, reporting on DSK's alleged links to the Carlton Affair, have now added speculation over his marriage to wife Anne Sinclair. When the Carlton stories first surfaced, Strauss-Kahn immediately asked to be heard by investigators in order to put a stop to the damaging rumors and clear his name. To date he has not been heard, but suspicions are growing that the rumors were not unfounded. Even though prostitution is legal in France, the question of who paid for these services is at the heart of the matter and could result in charges against DSK, which would certainly be used in the civil case against him in New York.

Initially, his old friends and allies in the Socialist party took the "innocent until proven guilty" position, but several of them have since made clear that "too much is too much" and are now coming out against him, effectively killing any glimmer of hope for a return to public life that still might have existed.

Recent rumors of an impending divorce have been countered by DSK and his wife filing a lawsuit for invasion of privacy and complaints of "base voyeurism" and media lynching in the absence of any formal charges against him. Who could have imagined this turnaround for a man who mere months ago was the well-respected head of the IMF and the likely next president of France? Used to being surrounded by admirers and sycophants, today he cuts a lonely figure on his way to oblivion.


(*)  For other festivals featured in Taking Root in Provence, click here.

Posted by Anne-Marie Simons at 6:37 AM No comments: