On May 18th the French parliament signed the controversial Mariage Pour Tous proposal into law, making France the 14th country to legalize same-sex marriage. It had been a long and fierce battle that opposed those in favor, who considered this a human rights issue above all, and those against, who represented the more conservative factions including many Catholics. Soon after the new law was signed, 78-year-old right-wing historian Dominique Venner shot and killed himself in front of the altar in Notre Dame cathedral, causing the evacuation of 1500 people. Earlier that day Venner had written on his blog that he despaired of the failure of peaceful mass protests against same-sex marriage and spoke of the need for "new spectacular and symbolic gestures to wake up the sleepwalkers and shake the anaesthetized consciousness". 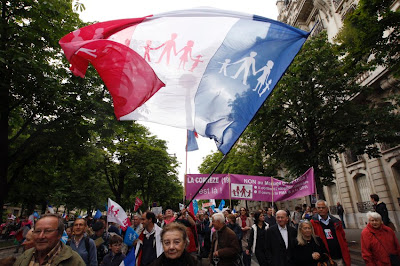 On May 29th the first gay marriage was celebrated in Montpellier by Mayor Hélène Mandroux who called this a historic moment not only for her city but for all of France, the country of Human Rights. Surprisingly, the event was extensively covered by the international press (e.g. Argentine newspapers, BBC, CNN, France 24). After all, France took this step years after some of its neighbors had done so, including Holland, Belgium, and Spain.

And yet, the world press was there in full force that day and the arguments for and against this legislation were rehashed again on all the main TV channels. The majority of the French, it appears, were in favor of gay marriage but not gay adoption, which was so fiercely contested that further protests and street marches were organized even after the law was signed. Unfortunately, during these protests a small group of extreme-right skinheads infiltrated the demonstrations, provoking skirmishes that often resulted in injuries and in destruction of property.

A side effect of this infiltration of neo-Nazi groups on the fringes of the gay-marriage issue was the increasingly violent clashes between the hard left of young anti-fascists and the extreme right of trouble-seeking skinheads which on June 6th resulted in the tragic death of a young Political Science student who was beaten to death by a group of skinheads. Words were exchanged at a private sale of Fred Perry T-shirts in a Paris apartment where 18-year old student Clément Méric and a few of his hard-left activist friends crossed some skinheads wearing "White Power" and "Blood and Honor" T-shirts. Once outside, the fight escalated on the busy street below. According to witnesses one of the neo-Nazis used a knuckleduster to knock down Méric who was then stomped to death in front of horrified bystanders. 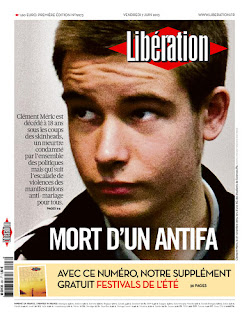 Interior Minister Manuel Valls blamed the extreme-right group and expressed concern over the "dangerous discourse" of the past weeks over same-sex marriage, while Jean-Luc Mélenchon, left-wing former presidential candidate, warned that the growing popularity of Marine Le Pen's far-right Front National party had caused a number of extreme-right groups to flourish. Prime Minister Jean-Marc Ayrault, meanwhile, called for all groups of "fascist and neo-Nazi inspiration" to be broken up, which would include the far-right Génération Identitaire which last year occupied a mosque under construction in Poitiers in protest against the "Islamization" of France.

Clearly, the murder of Méric has polarized the political debate, leaving an uneasy tension in its wake.

Excessive rainfall and severe floods have plagued much of central Europe this past month, notably in Germany and Hungary. The Danube and Elbe rivers burst through their banks and caused extensive damage to property and crops. At least eighteen people were reported killed and many thousands had to be evacuated, 23,000 in the German city of Magdeburg alone. Chancellor Angela Merkel called on the Army to sandbag dikes and assist rescue workers. The cost of cleanup operations is estimated in the billions of euros.

Just days ago, heavy rains and melting snow from the Pyrenees formed raging floodwaters in south-western France that caused three deaths and inundated a number of villages as well as part of the town of Lourdes, where the famous grotto and the subterranean church were flooded and pilgrims had to be evacuated. The large Sanctuary of Notre Dame de Lourdes was closed to assess potential structural damage and pilgrimages have been temporarily suspended.

This has been the worst flooding in memory, topping water levels measured during the "flood of the century" in 2002. Extreme weather conditions are becoming more frequent, and according to the European Environment Agency (EEA) floods of this magnitude are likely to recur in Europe, partly due to climate change but also due to changes in land use and population increase. Hans Bruyninckx, Executive Director of the EEA, stated: "climate change will be an increasingly important factor, but in many cases flood risk is also the result of where and how we choose to live. Increases in costs of flooding in recent decades can be partly attributed to more people living in flood-prone areas".

Local governments are responsible for issuing building permits in flood-prone areas and we may hope that past mistakes will not be repeated, but combatting climate change demands international cooperation. Judging by the disappointing outcome of the last UN conference on climate change, held in Copenhagen in December 2009 and attended by 115 world leaders, we have a long way to go. After days of political bickering, the Copenhagen Accord turned out to be a "weak agreement" that contained no significant future benchmarks for climate control. Rome burns while our leaders fiddle... .

"Bonjour Tristesse" reads the headline of a recent article by Mathieu Von Rohr in German weekly Der Spiegel. It referred to the economic and political decline of France and the "reality bubble", as Von Rohr terms it, that most of the French political class is living in.

Nearly all French leaders have been educated at the prestigious Ecole Nationale d'Administration (ENA), an institution with a quasi-monopoly of access to top-échelon jobs in the French civil service and entry into politics. Founded by General de Gaulle in 1945, ENA turns out approximately 100 graduates (called énarques) per year. This elite group, imbued with France's grandeur of days past, has been accused of being disconnected from reality, especially the diminished standing of France in the world. Not too surprising when daily reminders of this grandeur are everywhere and not only the president, but also the prime minister and most of his cabinet ministers occupy the grandest palaces of Paris which reflect a big, rich and powerful France.

The documentary "Pouvoir", shown recently in French movie theaters, seems to underline this point. Here is President Hollande in his daily routine at the Elysée Palace, surrounded by gilt and glitter and liveried lackeys who call out Le Président de la République! every time he enters a room. Director/producer Patrick Rotman had been given free access to François Hollande throughout the first eight months of his presidency, from the initial euphoria of his election to the first stirrings of discontent about his inadequate response to the nation's problems. 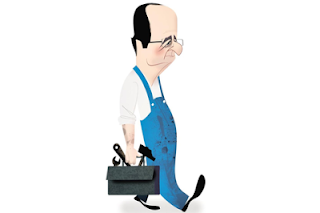 A depressed France sees record unemployment, a long-stagnant economy, factory closings, and uncompetitive labor costs on the one hand, and a patchwork of small remedies by a wavering president on the other. Past governments have failed to take decisive measures and it is ironic that it now befalls a Socialist president to implement the overdue cuts and deep reforms he had vowed to avoid. France has the highest public spending of all the EU members and its costly welfare model is no longer viable. The European Commission in Brussels had extended France's deadline for compliance by two years but is now threatening to issue warnings to implement the needed reforms. Worse yet, Germany has become the clear leader in Europe and is setting the tone.

Desperately looking for something positive, Hollande likes to remind us of his greatest success so far, that of sending French troops to Mali. At a recent press conference at the Elysée Paris he said: "Our soldiers have demonstrated their role: that of showing that France is a great nation that can influence the balance of power in the world". He frequently uses the term grande nation, as if to convince himself.

As he continues to tinker with his famous toolbox and still promises to reduce unemployment by the end of this year without any evidence of improvement so far, a majority of French voters no longer have faith in his methods. Few people seem to hate him, however. Rather, he is perceived as a nice guy who means well but is misguided and lacks the necessary toughness for the job. And as any Public Relations professional will tell you: perception is reality.

Just weeks after the hullabaloo over the introduction of English in certain courses at French universities, we still see headlines like this one in the French press. Libération: "Avec Antoine, on veut de l'actu, du fun et du pep's". (With Antoine, we want current events, fun and pep). And no, that apostrophe was not a typo.

BAD Men have arrived in France.

The French lingerie brand Aubade, known for its sexy advertisements, is focusing on men these days. Taking a clue from the popular TV series Mad Men, they have launched an ad campaign for a line of men's underwear in the form of snug little shorts. Wear these and women won't be able to keep their hands off you, they claim.

Anyone out there wanna give it a try?

I've had a perfectly wonderful evening. But this wasn't it . − Groucho Marx
;-)