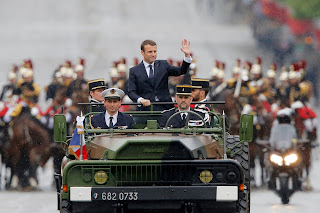 Yesterday, Emmanuel Macron was sworn in as president of France, at 39 the youngest ever, elected without the backing of a political party, and until recently better known for his unusual marriage than for his presidential potential. Seeing the official passation de pouvoir on television − a damaged and unpopular President Hollande handing over his powers to the rebellious economy minister who had left him less than a year ago to form his own political movement − the improbable story of the young outsider finally became real.


Of course, Macron was helped by the fact that President Hollande did not run for re-election, that primary winner and front-runner for the presidency François Fillon self-destructed during his campaign, and that the Socialist party was largely destroyed by infighting and numerous defections. Nevertheless, when last November Macron declared himself a candidate for the presidency, few people thought he could win, let alone in less than six months. But his ambition, his intelligence, his youth and energy, his independence from any political party, and the timing of his candidacy − when France was weary of prolonged high unemployment, angry at corrupt politicians, and full of doubt − opened the door to something new. And in stepped Macron, together with a wife who fascinates the press far beyond France. 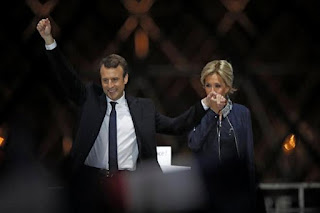 As the entire world knows by now, Brigitte Macron is 24 years older than her husband. They are both from the northern city of Amiens, where Brigitte Trogneux was a teacher of French and drama at her daughter's high school when she first met the student Macron; she 39 and married, he 15. When at age 17 he declared his love for her, his parents sent him off to Paris for further study. Several years later, Brigitte divorced her husband and moved to Paris where she continued teaching until 2015. She and Macron married in 2007, a happy ending to an unusual love story, and one that made Macron an instant stepfather of Brigitte's son and two daughters (today engineer, cardiologist and lawyer, respectively) and now step grandfather to seven grandchildren. 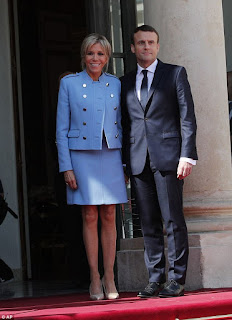 Their determination in the face of opposition by parents and rejection by the settled bourgeoisie in Amiens, as well as the patience and persistence with which they slowly won back respect and support, are character traits that will come them in good stead in dealing with the inevitable hardships and pitfalls of politics. And with the cruel emphasis placed on her age. Some hurtful and mean-spirited remarks regarding the couple's difference in age have already appeared, directed mostly at Brigitte, whose heels are judged too high, her skirts too short, and her appearance altogether too high-fashion. But this woman who broke the rules long ago amid much criticism in order to live her dream with Emmanuel Macron, has had time to develop a thick skin. It also helps that she has a sense of humor. Here's what she said when Macron had won the election: "It's a good thing he won now, because in 2022 my face would have made it impossible."

As someone who watched the all-day inauguration ceremonies on television yesterday, with its share of solemnity, ritual, splendor and poignancy, I sensed a positive mood overtake the city, a return of hope and self confidence, a belief in the promise of this young president who wants to revolutionize the political system and make it more efficient and responsive to today's needs. His task is immense and his path marked with goals he is expected to reach very soon, first among them to obtain a majority of seats in parliament for his new government (to be voted on the 11th and 18th of June) without which it will be near-impossible for him to enact his program of change.

After a much-applauded inaugural speech, humble and grand all at once, he was given a great send-off. Now it's up to him.

We wish him well and will follow him closely. 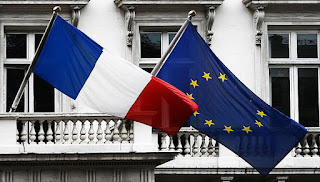