Two recent deaths in France are worth noting.
Peter Mayle, popular author of a series of books on Provence, died on January 18th at age 78. Paul Bocuse, legendary French chef and innovator, passed away two days later at 91. Both, in their different ways, had made their name in promoting the French quality of life, and found fame and fortune in doing so. 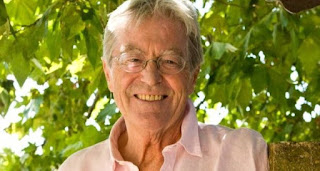 When Peter Mayle wrote A Year in Provence in 1989 he could not have known that it would become an instant bestseller and cause a flood of foreigners to come looking for a 'house in Provence' of their own. The impact on villages in the Luberon where Mayle had settled was immediate. Local farmers were happy to sell their unimproved homesteads, some without indoor plumbing or hot water, to eager buyers who would renovate them to modern standards of comfort and Provençal "charm". Poor villages became rich, soon sprouting boutiques and souvenir shops, sidewalk cafes, and real estate offices. Mayle's first Provence book, soon followed by others, sold millions of copies and was quickly translated into 28 languages but not in French. When a French translation finally appeared in 1996, it was not appreciated. The villagers he had been writing about with tongue in cheek did not take kindly to Mayle's humor and felt mocked and treated like idiots. "You put us under your microscope as if we were insects" was one of the criticisms, and the Englishman who had happily made a French village his home was suddenly less welcome. It is true that the local economy had vastly benefited from Mayle's promotion of the enviable local life, but consequently that life had become too expensive for many of the villagers. The amiable Mayle defended himself as best he could but failed to convince the French. He moved to another village and continued writing until shortly before his death. 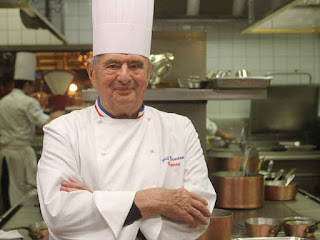 Dozens of chefs from all over the world attended Paul Bocuse's funeral service in the cathedral of Lyon to pay their last respects to their teacher and friend "Monsieur Paul" who was as much loved for his culinary mastery as for his simplicity and generosity. All of the star chefs were there, including the American Thomas Keller and Daniel Boulud who came from New York, as well as Hiroyuki Hiramatsu who came from Tokyo. Among those who spoke affectionately of Bocuse were Gérard Colomb, Minister of the Interior and former Mayor of Lyon, as well as fellow chefs Pierre Troisgros and Marc Haeberlin who fondly remembered some of the famous Bocuse dishes and his jovial "Bon Appétit et Large Soif." In a tribute from Davos, French President Emmanuel Macron called Bocuse "the incarnation of French cuisine."

Known as a leader and proponent of Nouvelle Cuisine, Bocuse nonetheless did not shun the heartier traditional dishes he grew up with. His food empire included a restaurant at Disneyworld in Orlando, Florida, and seven restaurants in Japan. He was named Chef of the Century by the Gault et Millau guide in 1989 and again by the Culinary Institute of America in 2011.

The "Pope of French cuisine" was laid to rest in the village of Collonges-au-Mont-d'Or where he was born and where he lived above his famous restaurant L'Auberge du Pont de Collonges, which continues to feature three Michelin stars today − as it has without interruption since 1965. 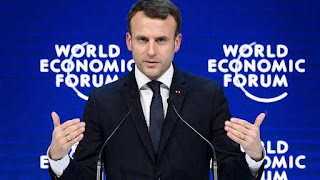 The World Economic Forum opened in Davos on January 23 and its keynote speaker on opening day was French President Emmanuel Macron who for one hour (half in English, half in French) presented his views to the international audience of bankers, innovators and financiers.

He addressed all the big themes of today and pleaded for greater global cooperation on immigration, terrorism, and climate change, underlined the need for transparency, multilateralism, a strong European Union, and called on China to stop its unfair trade practices and create a level playing field for international business there. He also asked that American internet giants doing business in Europe be taxed where they sell their products and not in tax havens. The speech was well received, even though certain attendees would no doubt take exception with some of Macron's proposals. Nevertheless, there is no denying that his performance in Davos reinforced his image as a world leader. 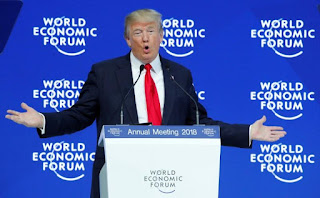 On the final day of the Forum, President Trump took to the podium and spoke to a packed auditorium, inviting investors to come to the United States where the stock market is booming and investment opportunities abound. Claiming all the credit for this economic resurgence, he hammered home his America First message and urged others to do the same for their own countries. For once he stayed on message, although he could not stop himself from criticizing the press and its "fake news" − a remark that met with boos. Overall, he received a polite response and happily huddled with a number of business leaders afterwards.

Macron and Trump, both surprise winners of their presidency, could not be more different in style and substance. After one year under his leadership, Trump's America has veered toward disengagement, protectionism and isolation, while France has taken on a leadership role in Europe and increasingly so on the global scene. 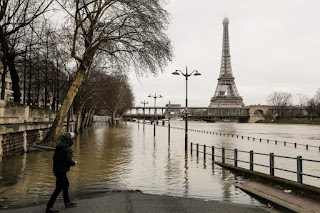 January 2018 has been the wettest month in France in 100 years. After weeks of incessant rain, rivers overflowed their banks, villages were cut off when roads and railroads were flooded, and excessive snowfall in the southeastern Alps forced the closing of several ski resorts.

When the fast-flowing Seine burst its banks in Paris all river traffic, including the famous bateaux mouches, was halted due to the danger of floating debris, and all traffic lanes along the Seine were closed. The RER-C railroad line serving Paris closed seven stations, and several museums along this line had to close or move their art to higher floors. In the Val de Marne, at the confluence of the Seine and the Yerres, residents who had barely recovered from the terrible floods in 2016 were hit for a second time. Even though the weather improved towards the end of the month, flood warnings remain in effect in the Ile de France as well as in 11 other départements. The floodwaters are receding very slowly due to the soggy ground's inability to absorb any more water, and a recent cold spell with heavy snow added more misery to the flooded areas.

Violent clashes broke out in a migrant camp in Calais last week, leaving 22 people injured. Five young Eritreans were hit by gunshots and four of them (between 16-18 years old) remain today in critical condition. It appears that gangs of people traffickers are pitting Afghans against Eritreans. A 37-year old Afghan identified as the gunman is actively sought by police.

Sadly, the dramatic situation of the Calais refugees who still cling to the hope of reaching England was aggravated by a recent meeting between British Prime Minister Theresa May and French President Emmanuel Macron when they agreed that England would speed up the visa processing of the many unaccompanied minors who are waiting to join relatives in the UK. The bureaucratic sluggishness is having serious effects on these youngsters, many of whom lost a parent or relative on their way to "safety" and are currently living in violence-plagued camps. The May-Macron announcement of the renewed British commitment caused a surge of new migrants into the already overcrowded makeshift camp in Calais where rival groups are vying for domination. It took only a minor incident in the foodline at the camp, fanned by people smugglers, to spark the violence that sent 22 people to hospital. 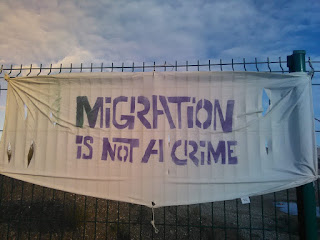 In the wake of the dramatic terrorist attacks in France, the problematic open-door immigration policy of Germany that has come back to haunt Angela Merkel, and the reluctance or down-right refusal of certain Eastern European countries to accept war refugees from North Africa, many Mediterranean countries who continue to see overcrowded refugee boats arriving at their shores have doubled their vigilance and their cooperation in detecting people smugglers among them and separating economic refugees from war refugees who seek political asylum. It's a difficult task given that many refugees arrive without papers. France has tightened its border controls, and those who currently live in refugee camps on its territory but do not qualify for asylum will be sent back. The massive migration of people fleeing war and poverty − the greatest humanitarian crisis of our time − has become a source of either shame or pride for the richer nations of this world.

FRENCH TERRORIST ON TRIAL IN BRUSSELS

Yesterday, February 5th, Salah Abdeslam, sole survivor of the jihadist terrorist cell that killed 130 people in attacks at the Bataclan theatre and elsewhere in Paris in November 2015, appeared for trial in a Brussels courtroom. The 28-year-old Belgian-born French national Abdeslam had been held in solitary confinement in Fleury-Mérogis near Paris awaiting his trial there, but his refusal to speak to French investigators has led his defense lawyers to quit in frustration. For the Belgian trial, which may last a week, Abdeslam was moved to a high-security French prison near the Belgian border from where he will be ferried daily to the Brussels Palais de Justice to be judged for his role in a Brussels shootout in March 2016 in which several police officers were injured. Three days later, during a raid on his hiding place in the Brussels suburb of Molenbeek, Abdeslam himself was shot in the leg as he ran from police, which allowed his capture after a four-month-long manhunt following the Paris November attacks. He may also be implicated in the failed attack in a high-speed train from Amsterdam to Paris via Brussels in August 2015 that was foiled by three American servicemen on leave, as well as in the attack at Brussels airport and a metro station in March 2016 which killed 32 people and wounded more than 300. Security around the Brussels Palais de Justice is extremely tight with a police cordon around the courthouse and a helicopter flying overhead.

After the Brussels trial Abdeslam will be returned to Paris where he will have to answer for his part in the November 2015 terrorist attacks in which his brother was killed. In a statement found on his laptop computer he admits that he meant to blow himself up at the Palais des Sports stadium in Paris where President Hollande, among 80,000 spectators, was watching a France-Germany football match. He writes that his suicide vest failed to explode and that he dumped it in a nearby bin (it has been retrieved) and regrets that he did not die like his martyr brothers. In the same letter he also says that he had wanted to go to Syria but that on reflection "it would be better to finish the work here with the brothers. I would just like to be better equipped in future before going into action," he adds, showing that he was planning further attacks.

Perhaps Abdeslam is right: nothing more is needed to establish his participation in the Paris attacks, but as the sole survivor he surely has valuable knowledge of European terrorist cells that French and international intelligence services would like to share. Whether he cooperates or not, he is sure to spend the rest of his life in jail.

Posted by Anne-Marie Simons at 6:47 AM No comments: