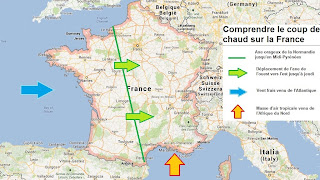 This summer it's HOT in France, in more ways than one. A heat wave, with temperatures climbing into the high 30's Celsius (over 100 F) is causing very destructive weather phenomena ranging from torrential floods to damaging hail storms. Violent thunderstorms that bring temporary relief with a brief deluge of rain have repeatedly caused flooding or destroyed crops and vineyards. 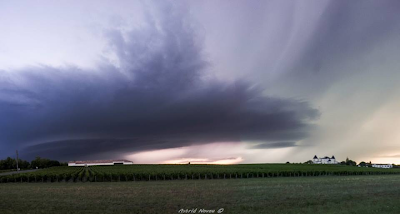 A few days ago, the weather service issued storm warnings to no less than 33 Departments, but not much can be done to prepare for this kind of thing. South-west France, and particularly Dordogne and the Gironde area around Bordeaux, was hard hit this first August weekend by sudden ferocious hail storms with hail stones the size of golf balls that cut a 10-km-wide path through wine country, severely damaging at least 4000 hectares of grapevines. "I lost 100 percent of my vines in ten minutes" said one grower whose 30 hectares lay in the path of the storm. "Some of my colleagues were less hard hit but overall we lost an average of 80 percent of our stock". The greatest damage occurred in the Entre-Deux-Mers region. Elsewhere, cars were deeply pockmarked, windows blown out, roofs damaged and trees downed, leaving thousands of households without electricity. 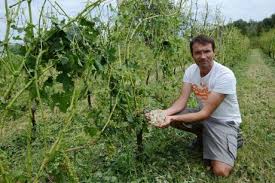 Less than two weeks ago, the Burgundy wine region was hit by similar hail storms that did significant damage to the Côte de Beaune and Pommard estates, among others. It may take up to three years for the vines to recover. "All the premiers crus are affected", said Jean-Louis Moissonet, president of the Pommard winemakers' union. "Last year the harvest was down by 60 percent; this year it will be down by 70 percent or more. It's a disaster."

After a long, chilly winter and severe floods in May, the country is now sweltering under extreme temperatures and being battered by recurring destructive storms. Nature is très agitée, indeed, and seems to be kicking back at the excessive heat.

Another kind of heat was rising in TRAPPES near Versailles. It is a poor place of subsidized housing and tower blocks with a large immigrant population, many of them Muslims. Unemployment and discontent are high. It takes less than a heat wave to set off the spark that can turn into a conflagration. This time the spark was an identity check by a policeman who asked a woman who was wearing a full burqa to lift her face veil and identify herself. Wearing this "voile intégral" is illegal in France where a 2010 law forbids all face coverings in public. According to police reports, the woman's husband objected to the identity check and attacked the policeman, trying to strangle him. He was promptly arrested. The incident quickly grew into a full-blown riot with a furious crowd setting fire to vehicles, trash bins, bus shelters and a construction site. After two nights of rioting on July 19 and 20, Interior Minister Manuel Valls paid a visit to Trappes where he reiterated that the law was clear and fair and should be enforced everywhere.

The situation in Trappes has calmed down but remains tense, as is the case in other housing projects with a toxic mix of hardline Islamism, joblessness and poverty. In 2005, weeks of rioting and car burning spread through a number of heavily immigrant suburbs and did not end until the government declared a state of emergency.

A side effect of the excessive heat is the unusually high number of drownings this summer. Between early July and August 4th, 91 people have drowned in France, 14 this past weekend alone. The drownings occurred mostly in the sea but also in lakes and in rivers, and were often the result of imprudence. Most of the people who drowned near the seashore had ignored the red warning flag hoisted on the beach. "They are ignorant of the undertow and think we are overly cautious and spoiling their vacation", said one lifeguard at a busy beach. Even seemingly placid lakes can be treacherous, sometimes because of very cold water, and there too the victims had ignored the No Swimming signs posted.

Some beach-town mayors are now talking about issuing fines to those bathers who deliberately ignore warnings and who endanger the lives of their rescuers, but this would be difficult to put into effect. In the meantime, Interior Minister Manuel Valls (he again, who never misses an opportunity to be seen and photographed in the place of the latest incident) is calling on everybody's sense of responsibility for their own safety and that of others.

The city of Cannes on the French Riviera, known for its International Film Festival, has just earned another claim to fame:  that of the biggest jewelry theft ever, which occurred on July 28th when one man managed to rob two boxes full of diamonds worth €103 million ($136 million)! A record for a single theft. 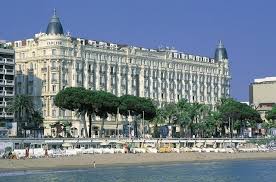 The jewelry belonged to Israeli dealer Lev Leviev and was on display in a ground-floor exhibition room at the Carlton Hotel on the famous Croisette for the "Extraordinary Diamonds" show and sale of the house of Leviev. On a Sunday morning in broad daylight the thief, who wore a cap, entered through an unlocked front window, tied a scarf around his face and walked into the exhibit room just as the two boxes of diamond jewelry were taken out of the safe to be put into the display cases. Brandishing a small automatic weapon he forced the staff to hand over the two boxes and managed to leave through a window that opened onto a side street where he quickly disappeared. Total time lapsed: one minute. 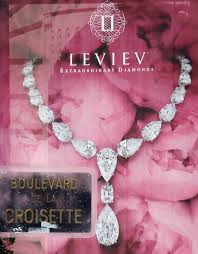 Three days later, Kronometry, a shop for luxury watches on the Croisette, was robbed by two armed individuals who got away with 44 watches of an as-yet-undetermined value. A sales person reported that as one of the masked robbers pointed his pistol at her, he apologized and said: "Désolé, c'est la crise!" (Sorry, these are tough times). Last February Kronometry lost 150 watches, worth a total of €1 million, during a lunch-time break-in.

And the May 2013 Film Festival in Cannes saw its share of movie-worthy heists. Jewelry worth €1 million, meant to be worn by one of the actresses at the Festival, was stolen from the room safe of an American employee of Chopard's at the Novotel. And days later, during a gala evening at nearby Cap d'Antibes, a diamond parure belonging to Swiss jeweler Di Grisogono, worth €2 million, was stolen.
Desperately Seeking: Cary Grant to Catch The Thief.

After he joined the board of the Russian Regional Development Bank last month, Dominique Strauss-Kahn has now been approached by the Republic of Serbia with the offer of an advisory role to its government. Aleksandar Vucic, Deputy Prime Minister and leader of the biggest party in the coalition, announced that the Finance Minister has been fired and the country is seeking foreign advisors to assist a revamped Cabinet. "We need these people who know more than we do", said Vucic, who is in charge of the government's anti-corruption drive. Serbia will have to show it is fighting corruption when the talks begin in January for Serbia's membership in the European Union. 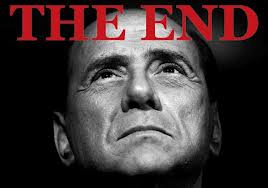 On August 2nd the Court of Cassation in Rome upheld the lower court's earlier conviction of Silvio Berlusconi for tax fraud in connection with his Mediaset company. But the four-year prison sentence was immediately reduced to one year, to be served under house arrest in view of Berlusconi's age, 76. And the five-year ban on public office was sent back to the lower court with instructions to recalculate the ban between one and three years, thus allowing Berlusconi to keep his position as senator for now. With no more appeals left, this time Il Cavaliere could only lash out against what he called a judicial vendetta, and ask his supporters to come out and denounce his condemnation. Through his media empire he has unleashed a flood of criticism as well as veiled threats to undo the fragile government coalition between his People for Freedom (PdL) center-right party and the center-left Democratic Party (PD) of Prime Minister Enrico Letta.

Former PdL-party Culture Minister Sandro Bondi warned that if Berlusconi is not pardoned Italy may face a civil war. And Renato Brunetta, parliamentary floor leader for the PdL party, told President Giorgio Napolitano that every PdL minister is prepared to resign. If that happens, new elections will have to be called. Prime Minister Letta, who has difficulties within his own party, would prefer to avoid new elections and has called for Berlusconi to resign. Similarly, President Giorgio Napolitano, mindful of the political deadlock caused by inconclusive elections last February that lasted two months and was broken only when at age 87 he reluctantly accepted another seven-year term (see my April 22 post), would wish to avoid new elections. Both Napolitano and Letta may therefore find that "saving Berlusconi" is the lesser evil. This is what Berlusconi is counting on.

If despite his strong-arm tactics and machinations new elections were to be held this fall, Berlusconi has another card up his sleeve. He has recently confided to a few insiders that in that case he may have his daughter Marina replace him as a candidate. Marina, 47, mother of two and married to a former ballet dancer, heads Berlusconi's holding company Fininvest and has proven to be an able businesswoman. She has no political experience whatsoever but can count on daddy's guidance, and Italy can count on a new season of the Berlusconi Show. Stay tuned.

Posted by Anne-Marie Simons at 1:33 AM 2 comments: