As Parisians were glad to leave behind the annus horribilis of 2015 when terrorism exploded in their midst, there was little midnight joy in welcoming in the new year, and 2016 tiptoed in on slippered feet as if not wanting to disturb.

No fireworks in Brussels and Paris where the state of emergency continues and the official celebrations were cancelled or curtailed on fears of a terrorist attack. In Paris the traditional New Year's Eve fireworks were replaced by a five-minute video display on the Arc de Triomphe, while other European cities celebrated in rather subdued fashion amid tightened security. In Munich two railroad stations were closed on busy New Year's Eve following a credible tip of a planned terrorist attack and in Berlin bags and backpacks were searched as crowds gathered for the fireworks at the Brandenburg Gate.

The November 13 attacks in Paris revealed a network of Belgian- and French-born jihadists operating from Brussels with direct links to Syria. Like the French security forces, Belgian police remain on high alert and have arrested a number of suspects. In a recent raid on an apartment in the Brussels neighborhood of Schaerbeek, they found man-made suicide vests, various weapons, traces of TATP (the explosive used in the Paris attacks), and a fingerprint of Salah Abdeslam, the fugitive Brussels-based jihadist who participated in the Paris massacre but managed to get away. He remains at large today.

On January 7th, exactly one year after the Charlie Hebdo attack, a man wielding a butcher knife and shouting Allahu Akbar! tried to storm a police station in northern Paris. Ignoring orders to stop, he was shot and killed by the police standing guard outside. A fake explosive device was found on his body, as well as a printed image of the ISIS flag and a handwritten note in Arabic claiming responsibility for the attack. His identity was not immediately established, but the mobile phone found on him contained a German SIM card which led investigators to a refugee shelter in West Germany where he had been living for several months as an asylum seeker until he disappeared in December 2015. He had apparently been using different aliases while in Europe. French media reported that his fingerprints matched those of a homeless man convicted of theft in southern France in 2013 who gave his name as Sallah Ali, a Moroccan. However, people claiming to be relatives have identified him as a 30-year-old Tunisian named Tarek Belgacem.

His status as asylum seeker in Germany has sparked a renewed debate about the 1.1 million refugees Germany has welcomed this past year and attacks against Chancellor Angela Merkel's open-border policy have sharply increased. 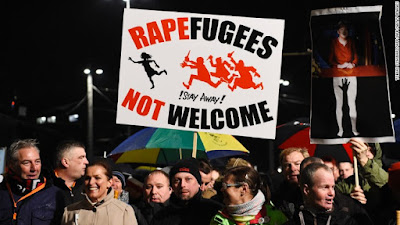 On New Year's Eve, as many as 1000 drunk and aggressive men "of North African appearance" gathered around the main railroad station in Cologne and began harrassing women as they came out of the station to join celebrations in the city. As the evening progressed and the crowds grew thicker, this turned into a mob attack of muggings and sexual assaults that quickly overwhelmed the nearby police who did little or nothing to interfere. About 60 complaints were filed that night for robbery and assault, including two for rape. Thirty-one men were subsequently arrested, among them 18 asylum seekers. A leaked police report, obtained by the magazine Bild, says that women were forced to "run a gauntlet ... beyond description" to enter or leave the station, and that the perpetrators were "almost exclusively of migration backgrounds."

On Monday, officials reported that 553 criminal complaints had been filed, nearly half of them for sexual offenses, including eyewitness reports of coordinated attacks and lack of police response. In the wake of the incidents, the city's police chief was fired and Minister of Justice Heiko Maas announced that new laws are being drafted that will make it easier to extradite foreign criminals and strip them of their refugee status.

The scale of the crime wave in Cologne, and to a lesser extent in Hamburg and several other German cities, has heated up the public debate on immigrants and sharply divided the country. Far-right groups were quick to blame the attacks on the influx of refugees. As the anti-immigration extreme-right PEGIDA movement drew thousands of participants in rallies in Cologne and Leipzig, pro-immigration groups countered with anti-PEGIDA marches. Police responded to occasional violence with tear gas and water cannons.

German media, including the public-service broadcaster ZDF, did not report the Cologne incidents until four days after they occurred, feeding the perception of a "lying press." In the face of turmoil and mounting mistrust, Angela Merkel has had to revisit her refugee policy. Maintaining her position that Germany must remain open to refugees from war and civil strife, Merkel said nevertheless that "something has to change."

"Where there is crime, there will be consequences," she warned, saying she will support tougher laws to deport migrants convicted of criminal conduct. It is worth noting that at least 3000 migrants still arrive in Germany every day.

The subject of expulsion is currently a hot topic in France as well. In the days following the November 13 terrorist attacks in Paris that left 130 dead and hundreds more wounded, President François Hollande first spoke of the possibility of revoking French citizenship from convicted terrorists with dual nationality - a subject he brought up again during his traditional New Year's Eve address. In the interval, a heated debate had developed around the issue, which requires a change in the constitution, with many on the right (including former president Sarkozy) supporting it while several prominent Socialists, such as former prime minister Jean-Marc Ayrault, Paris Mayor Anne Hidalgo, and Justice Minister Christiane Taubira oppose it. Public opinion seems strongly in favor, with polls indicating that some 80 percent of the French support the measure.

France has the largest Muslim community in Western Europe, including many French-born with Moroccan, Algerian and Tunisian origins who have both citizenships. Some see the proposed measure as targeted specifically against this community; others recall the collaborationist Vichy regime during World War II that revoked the citizenship of Jews and members of the French Resistance, including General de Gaulle as well as St. John Perse who later won the Nobel Prize for literature.

The constitutional change will be debated in Parliament in February where it needs a three-fifths majority vote. To date, the left remains divided. Prime Minister Valls defends the measure as "a strong symbolic act that punishes those who excluded themselves from the national community" while Justice Minister Taubira expressed her disagreement and called the proposed change "completely useless."

The strong-willed Mrs. Taubira may be remembered for earlier clashes with Mr. Valls and Mr. Hollande but has always managed to survive calls for her resignation. One reason may be that President Hollande, who is increasingly drifting to the right, needs the very visible Mrs. Taubira as proof that he still runs a socialist government.

Whichever way the vote goes, the dissension within the Socialist ranks comes at a bad time for a president who is expected to run for re-election in early 2017 but so far has been incapable of bringing down unemployment or even of keeping his ministers in line.