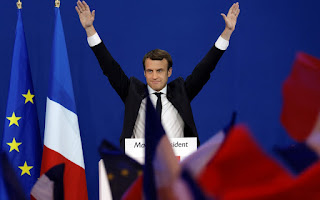 It's over, and the winner of the first round of the French presidential election is centrist Emmanuel Macron of the movement En Marche! who will face far-right candidate Marine Le Pen of the Front National (FN) in the runoff on May 7. With 24.01 percent and 21.30 percent of the vote, respectively, they eliminated from the race conservative and early frontrunner François Fillon and hard-left candidate Jean-Luc Mélenchon who obtained close to 20 percent each. Predictions are that Macron will win the second round and become the next president of France, but if the abstention rate is high (May 7 is in the middle of a long weekend) and if Mélenchon's disappointed followers vote for Le Pen because she, like Mélenchon, wants to leave the Euro and the European Union, nothing is sure.

I watched these elections at a friend's house where about a dozen of us had gathered for the election results and for dinner. One couple among us had voted for socialist candidate Benoît Hamon out of political conviction even though he had no chance of winning. This type of sympathy vote is not uncommon in the first round since you can change your vote in the second round. But we all remembered the disastrous outcome of the 2002 election when confident socialists frittered away so many votes in the first round that far-right candidate Jean-Marie Le Pen (father of Marine) overtook and eliminated socialist candidate and expected winner Lionel Jospin. A joyous evening instantly turned somber, to which our hostess had only one answer: she opened several bottles of Chateau d'Yquem that she had just inherited from her father. 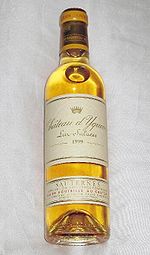 No Chateau d'Yquem this time, but cautious optimism that 39-year-old Emmanuel Macron will win the presidency on May 7. Given the scandal-clouded campaign of center-right candidate Fillon, and the sudden rise of firebrand left-of-the-left Eurosceptic candidate Mélenchon in the latest polls, the Macron-Le Pen duel was one of the better outcomes we could hope for. But this was no ordinary election in that, stunningly, the two main ruling parties, Fillon's LR and incumbent President Hollande's PS, were both knocked out in the first round.

Five years of President Hollande's failed government have left the socialist party in tatters (its presidential candidate Benoît Hamon got no more than 6.36 percent of the vote), and the refusal of a damaged François Fillon to withdraw from the race in favor of fellow Republican Alain Juppé has been blamed for the conservative LR party's loss. Voters' disenchantment with the two main parties was surely one of the reasons for maverick Mélenchon's strong showing.

Most political leaders, including President Hollande, have since called on their constituents to vote for Macron (against Le Pen), if for no other reason than that France should stay in the European Union. But Le Pen smells victory and is redoubling her efforts, especially in distressed areas where factories have closed and unemployment is high. Her audience, essentially less educated workers, traditional, older and risk averse, fears Macron's youth and is suspicious of his banking background. They are pessimistic by nature and seek security and protection with Le Pen. She is a high-energy person and a good speaker whose nationalist message resonates with her audience. 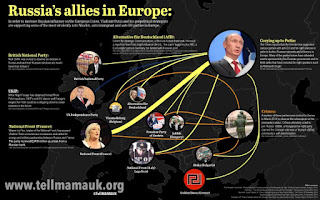 She may be getting some help from Russia (she met Putin in Moscow last month) according to reports that Russian hackers have targeted Emmanuel Macron's computer network. Global cybersecurity firm Trend Micro identified the group as the same ones who penetrated the Democratic National Convention's network last year and says they may be linked to the GRU, an elite Russian military intelligence unit. Putin does not want a strong European Union, and neither does Le Pen. French authorities have been alerted, and Trend Micro will issue a detailed report this week.

Emmanuel Macron tends to attract a better-educated, somewhat younger population that is willing to break with tradition and is open to change. He founded his own EM movement ("neither left nor right") to have the freedom to promote his personal vision for a stronger, modernized France, where it will be easier to innovate or start a business, and where he wants to streamline a bloated bureaucracy. He is a strong defender of the European Union and of international trade. To counter the argument that at age 39 Macron "lacks experience" his followers point to his four years in government service, the last two (2014-2016) as Minister of the Economy, and to the extraordinary feat of winning the first round of the presidential election after less than six months of campaigning. Before the final round, however, he still needs to convince the doubters and fence sitters to step to his side rather than to Le Pen's.

This campaign is not over, but I cannot help dreaming already of a dynamic Justin Trudeau or John F. Kennedy at the helm in France.

Two weeks ago, the refugee camp at Grande-Synthe near Dunkirk was destroyed by a fire, said to have been set by the migrants themselves in a clash among the camp's occupants. Ten people were hospitalized, several of them with stab wounds, and some 600 were sheltered in nearby gymnasiums. Hundreds of others, however, are unaccounted for and are thought to be roughing it in the surroundings.

According to local authorities, a fight had broken out between Kurdish and Afghan migrants over accommodations in the camp, with Afghans complaining that they were housed in the collective kitchens while the Kurds slept in wooden sheds. This camp of wooden sheds had been built by Doctors without Borders to house 800 people, but at the time of the fire it held 1500. The original occupants were mostly Kurdish, but when French authorities dismantled the infamous Calais Jungle camp in October 2016, it re-settled hundreds of Afghans in the Grande-Synthe camp which lacked sufficient wooden sheds for all.

Most of the people at Grande-Synthe want to go to England, including minors who have family there, and are awaiting visas for the UK or asylum papers for France. Others are still trying to get to England illegally and refuse to leave the area for camps further south. Many of those who have disappeared after the fire are thought to be hiding out between Dunkirk and Calais for further attempts to cross over to the UK.

As a rule, it is government policy to settle families with small children first and to house unattached men in temporary camps while their visa or asylum applications are being handled. In the meantime, these men are not allowed to work, but with the help of volunteers and charitable associations they are given language classes and usually a place of worship. Nevertheless, the longer they are held in these camps, the more discouraged they become and the easier it is for a minor incident to spark violence. It is to be remembered that these people ran for their lives and that they paid a terrible price just to find safety before returning home when war ends or being allowed to work and build a new life without handouts. It is a matter of survival and life with some dignity for the migrants, and a moral and humanitarian issue for the host countries where, more often than not, especially in northern Europe, the welcome has been lukewarm at best.

Sadly, the refugee crisis has been displaced by French elections, shifting tensions in international relations, and continuing terrorist attacks around the world, including in Paris where a policeman was killed last week on the Champs Elysées, and two other police officers and one tourist were wounded. The assailant was shot dead by police. The attack was soon claimed by the Islamic State, although the gunman, identified as 39-year-old French national Karim Cheurfi, who had a long criminal record and spent 15 years in jail for attempted murder of a police officer, was not known to be radicalized. At his death he carried a note in his pocket that defended ISIS, and the addresses of four police stations in Paris as well as a Koran were found in his car. French authorities are treating this as an Islamic terrorist attack and are continuing their search for potential accomplices. No rest for the weary French security forces who have been working under a State of Emergency for too long. And no national security as long as home-grown Islamist extremists pursue their misguided mission against "infidels." Let's hope that the next president will find a workable solution to this problem and, of course, let's hope it will be Manuel Macron! 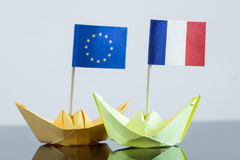 Posted by Anne-Marie Simons at 5:17 AM 2 comments: