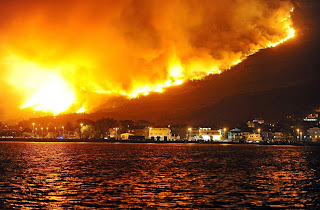 The month of August is usually a quiet one in France, with a good part of the country as well as the government on holiday.  In addition, a heat wave that brought us unheard-of temperatures of 39°C in Aix-en-Provence and up to 41°C elsewhere kept people indoors and produced the unusual sight of an empty Cours Mirabeau at mid-day, where limp-looking overheated tourists sought relief on mist-cooled terraces or by splashing their faces with fountain water. Without air conditioning at home, I prefer to take refuge in the cinemas in the old city center for an afternoon movie during the hottest hours of the day. Easy enough when we have a choice of more than 30 films, spread over three cinemas, every week. No long lines and perfect air conditioning (not too cold), exactly what the doctor ordered. 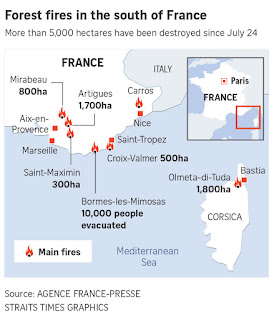 As we all slowed down and went into energy-saving mode, there was no break for the firemen who worked to the point of exhaustion in battling the numerous blazes in the tinder-dry south of France and in Corsica, often against a strong mistral wind or on difficult terrain. Many thousands of acres were destroyed this summer, sometimes for good, reducing the pine-covered hills to desolate moonscapes, and displacing people from campsites, holiday homes and remote villages. Even the monks in the beautiful monastery of Senanque in the Luberon had to be evacuated when a fire in nearby Gordes threatened their ancient abbey. 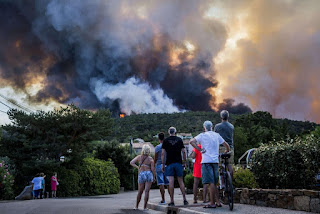 Some of these fires were caused by lightning but others were the result of negligence or of careless drivers who threw a lighted cigarette from their car windows. [One mayor of a small town in the Alpilles region pleaded with auto makers to reintroduce ashtrays in cars.]  But according to Vincent Pastor, investigator at the regional fire department for the Bouches-du-Rhône area, fully 25 percent of all fires are set by man, usually with criminal intent. One such pyromaniac, a 19-year-old from Istres, was finally apprehended after witnesses had denounced him. He has admitted to setting at least eight of the fires that have sprung up in and around Istres this summer because he was "fascinated by flames." If convicted, he risks up to 15 years in prison. 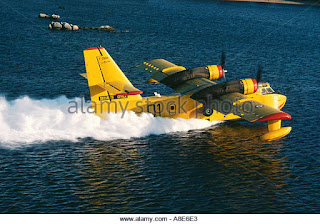 These wind-whipped fires in the Provence and Var areas of France could not be fought without the help of the Canadair fire-fighting planes that like giant pelicans scoop up the water that they dump on forest fires and hard-to-reach blazes. On windy days they are sent into action at the first alert and their distant rumble has become a familiar sound on hot summer days as it blends with the song of cicadas.


Legendary actress Jeanne Moreau died at her home in Paris on July 31, aged 89.

Best known for her roles in such French classics as Jules and Jim (François Truffaut) and Les Amants (Louis Malle), she worked with many international directors as well, including Michelangelo Antonioni, Elia Kazan, Luis Buñuel, Joseph Losey, Toni Richardson, Wim Wenders, and Orson Welles who called her "the best actress in the world." She won a number of Best Actress awards and was honored with a Lifetime Achievement award in Cannes, Berlin, Venice, and Hollywood. She first appeared in Avignon at the opening of its theatre festival in 1947 directed by its founder Jean Vilar, and for the last time in 2011 when she recited Jean Genet's play Le Condamné à Mort accompanied by pop singer Etienne Daho, her face by then a magnificent ruin, her smoker's voice as strong as ever. "Living is taking risks" she was fond of saying.
Born to a French father and an English mother, she was perfectly bilingual, yet to some of us she was the most French of French actresses, sensuous, stylish, intelligent, and unpredictable. A star.
She is survived by a son from her first mariage to Jean-Louis Richard. She had a brief second marriage with American director William Friedkin.

MACRON: END OF THE  HONEYMOON? 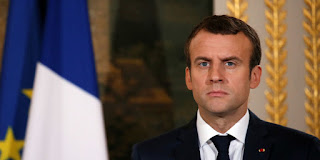 Other than fires and Donald Trump's latest excesses, the French press has had little to report on this month, which may be one factor contributing to the current wave of anti-Macron stories. Suddenly, the golden boy of French politics who was the star of recent global summits and host to three of the world's most controversial leaders in Paris (Vladimir Putin, Donald Trump and Benyamin Netanyahu), has tumbled from an approval rating of 64% in June to 36% in August at the end of his first 100 days in office. What happened?  Various explanations are offered, varying from "too authoritarian, too far to the right, not what he promised" to "undemocratic" (he plans to pass a new labor law by decree), "a banker" (read: untrustworthy), and "surrounded by inexperienced people." I would venture to add an observation of my own: The French are never happy. It is in their DNA to complain, and the post-election euphoria was bound to be short-lived. A swing of the pendulum was to be expected and was definitely helped along by talking heads and columnists whose job it is to create controversy and keep the ink flowing.

Nevertheless, a sense of disappointment is in the air, and what sounded attractive to voters after the failed government of socialist president Hollande, is beginning to feel threatening to the traditional French base now that Macron has unveiled his plans and begun detailing some of his proposals. The source of their worry is Macron's announcement that he wants to reign in French deficit spending and bring the national debt down to 3 percent of GDP, as required by the European Commission in Brussels.

− he plans to change labor laws that hold France back in the international market place (but guaranteed job security to French employees);
− he introduced a law on Moralisation of Political Life that prohibits French parliamentarians from employing family members as paid assistants, a widespread custom that caused the downfall of presidential candidate François Fillon (see Penelopegate). This moralisation law, passed last month, would also eliminate the current trust-based slush fund for deputies' expenses and switch to verifiable expense accounts for reimbursement.
− civil servants (20% of the French workforce) will not receive an automatic salary increase this year and, in an effort to curb absenteeism (which costs the State €170 million a year) will no longer be paid for the first day of sick leave.
− perhaps most controversial of all, Macron cut the Defense budget by €850 million, causing General Pierre de Villiers, chief of the armed forces, to resign.

Hence: discontent in parliament, in the civil service, and in the military, not to mention the outcry on the political left which was to be expected.

Jean-Luc Mélenchon, firebrand leader of the radical-left movement La France Insoumise (France Unbowed) that won 17 seats in Parliament in the last elections, has vowed to block the proposed new labor code and is calling for massive demonstrations in Paris on September 23rd.
For its part, the CGT, France's largest labor union, has called for a general strike on September 12th.


So after a somnolent August, September promises to be agitated as the government reassembles in Paris and the all-important issue of the labor code looms on the horizon. Mélenchon, with his "over-my-dead-body" attitude, aims for maximum disruption and has threatened to seize the Constitutional Council over the legality of a government decision by decree. It is the first major test for Emmanuel Macron, and he will be watched closely.

In the meantime, France is still in holiday mode and blissfully unconcerned for a few more weeks about the political storm that is brewing.

September can wait, with its back-to-school and back-to-work and back to strikes and protests.

Pass me the pastis, will you?