At its mid-September Session in Lima, Peru, the International Olympic Committee made the historic decision to simultaneously announce the awarding of the Summer Olympics to Paris in 2024 and to Los Angeles in 2028. After three unsuccessful bids in the past 25 years, the City of Paris finally won the Olympics for 2024, exactly one hundred years after it last hosted the Games.

It will be an occasion for Paris, host of the 2015 UN Conference on Climate Change, to show its many climate-friendly initiatives that should benefit the Games: cleaned-up Seine river, diesel-driven trucks banned from the city, electricity for most public transportation, more bicycle paths, reduced car traffic.

With a current Games budget of €3.8 billion, roughly half will go to the sporting events, the remainder to development and infrastructure projects which will extend to the banlieues, those Paris suburbs in the department of Seine-St. Denis where youth unemployment is high and social unrest a recurrent problem.

Paris mayor Anne Hidalgo boasts that these Games will be cheaper and greener than earlier ones, pointing out that 95% of all sports venues already exist or will be temporary, and that many of the new structures will benefit disadvantaged areas such as Seine-St.Denis where the Olympic Village will be built, as well as an aquatics center and a media center. The aquatics center will become a pool for local residents after the Games, and the Olympic Village and the media center will be turned into housing.

Another project of lasting benefit to the locals is the €300 million "green" makeover of the 209-meter-high Tour Montparnasse, a true eyesore. The new Tour will be clad in a glass outer structure, with lower levels covered in planting and crowned by a roof-top garden. Work on the conversion will begin in early 2019, to be finished in time for the 2024 Olympics.

Some 38 venues for olympic and paralympic events will be dispersed throughout Paris, with some competitions taking place in existing buildings and others in temporary structures with backdrops such as the Eiffel Tower, the Champs Elysées, and the river Seine. Equestrian and biking events will be held on the grounds of the Chateau de Versailles, and sailing events will take place in Marseilles. 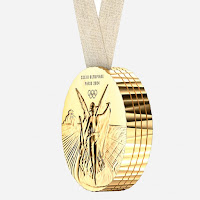 French designer Philippe Starck has designed a special, layered, Olympic gold medal for these Games. It will be thicker than before, but can be split in four so the athlete can share it with parents or friends. 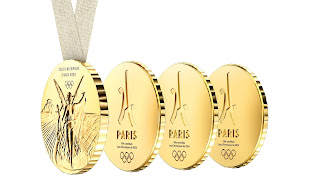 The use of stunning historic sites in Paris and Versailles as well as the natural assets of Marseilles and its off-shore islands cannot fail to make the 2024 Olympics one of the most spectacular ever.
And now to work!

The month of September came and went without the sound and fury promised by labor unions and other opponents of President Macron in their mass demonstrations on September 13, 21 and 23 in Paris. Generally well attended, the demonstrations were nevertheless peaceful, though disruptive, and proved of no great impact.

At summer's end, President Emmanuel Macron's approval ratings had nosedived from a high of 64% in June to a low of 36%, which would be a source of concern for any president on the eve of passing a contested Labor Reform bill. Yet, nothing indicates that this month's protest marches and the exhortations of Jean-Luc Mélenchon, leader of the far-left La France Insoumise (LFI), had any effect on Macron's determination to pass his controversial reforms by decree. Defiantly, he even signed his executive order at the Elysée Palace in front of TV cameras, à la Donald Trump.

Amid general agreement that the complicated French Labor Code needs to be simplified, giving companies more flexibility in hiring and firing, there is little support from the Left which considers these reforms more pro-business than pro-employee. They fear that "easier firing" will result in loss of jobs and cause one more crack in the protective shield of their droits acquis − those rich benefits gained during the 30 post-war years of uninterrupted growth. These benefits, which include job protection, universal health care, free education, family allowances, long paid vacations, etc. have come under increasing pressure over the years and have always led to massive protests and costly strikes whenever cutbacks were attempted.

Earlier this month Macron invited the labor union leaders to the Elysée Palace for discussions and potential adjustments to his proposals. That time has now passed, and on September 22nd he signed his reforms by executive order before they will be passed into law by the Parliament, where Macron's party holds a majority.

During his presidential campaign, Macron had pledged sweeping economic and social changes which would make France more competitive, attract foreign investors, and reduce unemployment which, at 10%, remains high. He also pledged to bring France's national debt to below the level of 3% of GDP, as required by the European Commission. To achieve this, he proposes not only a change of labor conditions, more in line with other countries, but a mix of savings, tax cuts and tax hikes, with winners and losers, but nothing particularly alarming. 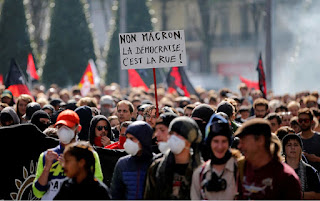 He blames the stagnation of France's economy on the rigidity of its labor codes which make employers reluctant to hire people they may not be able to get rid of later on. His new labor laws would simplify direct negotiations between employers and employees, and reduce the power of national collective bargaining. Unions and young jobseekers see this as a threat and have vowed to continue protesting, but Macron's response that he "believes in democracy but democracy is not in the streets" speaks of his resolve. Backed by the Medef, France's employers' union, and armed with the lessons learned from previous failed attempts at reform, he has youth and self-confidence on his side.

FOR A STRONGER EUROPE

Days after he signed his new Labor Code by executive order, Macron gave an impassioned speech to hundreds of French and foreign students in the great amphitheater of Sorbonne University on his favorite subject: Europe.

For an hour and a half he outlined his vision of a strong Europe, including
− a common defense budget and common efforts to fight terrorism;
− a common migration policy, with a European border police and a European Asylum Office;
− a common response to global warming, with common efforts and means to protect civilians against increasingly frequent "natural" disasters;
− an effective carbon tax within the EU borders as well as a tax on financial transactions, and taxing internet giant GAFA (Google, Apple, Facebook and Amazon) on their revenues where they are earned, not in the fiscal paradise where they are currently applied.

As for France and its notoriously insular attitude towards foreign languages, he proposed that by 2024 all university students speak at least two European languages, and that as part of their education they spend at least six months abroad. [This could only come from a young president, since not a single one of the previous ones, with the exception of Jacques Chirac, spoke English.]

Aware of the mounting nationalism in a number of European member states, Macron underlined that he does not want a federalist Europe, but a sovereign, united, and democratic one; a bulwark against the superpowers of the United States and China. To get there, he will need the full support of his pro-Europe ally Angela Merkel who, unfortunately, was weakened in last Sunday's German elections and will now have to form a three-party coalition that includes at least one anti-European one. Forever the pragmatist, Merkel will likely look for common ground and make compromises both at home and on Europe. An upcoming meeting of the Franco-German couple may produce good or bad news for Macron's Europe. We will soon know more.

Posted by Anne-Marie Simons at 2:29 AM No comments: