The sizzling-hot month of July was punctuated by two major celebrations: 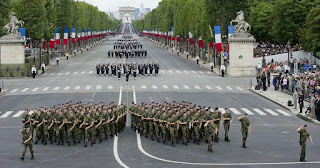 BASTILLE DAY on the 14th of July, as alway a showcase of France's grandeur with the requisite pomp and circumstance and an impressive military parade down the Champs Elysées that last year caused an envious Donald Trump to say: "I want one of those". (I hear he is getting one).

Then the evening program with an open-air concert at the foot of the Eiffel Tower, with the Orchestre National de France and international opera stars who not only sang a number of operatic arias but a stirring rendition of La Marseillaise as well, backed up by the full choir of Radio France. And, finally, splendid fireworks on a theme of Love to cap this glorious day. The French do know how to show off and this was a stunner.


The next day, the French soccer team beat Croatia in the WORLD CUP finals in Moscow, to an explosion of joy throughout France where every bar and every terrasse showed the match on a large-screen TV, and most cities had set up fan zones in parks and other public areas where people could watch Les Bleus on giant screens. The final whistle set delirious crowds running down the streets singing, hugging, flag-waving and chanting "On est champion!" until their voices gave out. Even President Macron who attended the match in Moscow could not contain himself and jumped into the air. On this weekend, all was well with the world, at least in France.

But then Donald Trump elbowed his way back onto the scene with a 7-day European visit that quickly went from embarrassment to disaster. 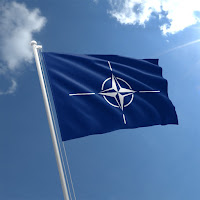 The visit started with the NATO summit in Brussels on July 11-12, where Trump demanded (not unreasonably) that Europe spend a proportionately greater share of the cost of its defense, which he put at 4% of GDP per member country. Having noisily declared NATO obsolete last year, he now recognizes its raison d'être as long as everybody pays his fair share, which in the end he accepted as the 2% of GDP agreed to previously. As has become his trademark, Trump took center stage at the first-day breakfast meeting with an on-camera attack on Angela Merkel when he said Germany was being "totally controlled by Russia". Merkel's pointed response was that she knew what an authoritarian regime was since she grew up in Soviet-controlled East Germany, and that she was happy that today, with NATO, Germany was free to make its own decisions. 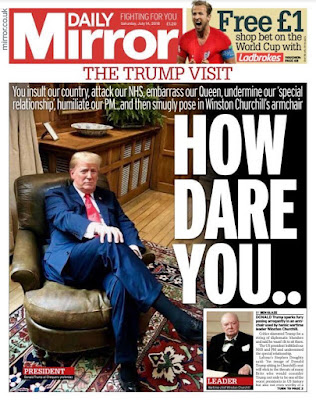 The next day Trump flew to the UK where he met with Theresa May at Chequers, her official summer residence, and publicly crtiticized her Brexit negotiations ("She should have listened to me") while praising her arch-enemy and former foreign minister Boris Johnson, who "would make a great prime minister". Having been banned from London where Mayor Sadiq Kahn said he could not guarantee Trump's safety in the face of massive protests against his visit, he then went on to Windsor Castle where the Queen received him for tea. The cringe-worthy visit will be remembered for the boorishness of the visitors (they kept the Queen waiting, Melania did not curtsey, at the inspection of the Royal Guards Trump did not look at them, he lumbered ahead of the Queen, jacket unbuttoned...) and for the shortness of the visit: exactly 47 minutes, including the tea. 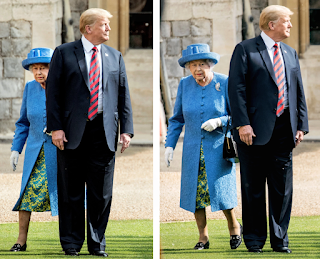 Then on to Scotland for a 2-day stopover at one of his golf clubs before flying to Helsinki and his meeting with Vladimir Putin, which included an unusual 2-hour private discussion with only an interpreter present. Did anyone miss the disastrous press conference where Trump took the side of Putin over his own intelligence services on the issue of Russian meddling in the 2016 elections? "Vladimir Putin was very strong in his denial of meddling and I don't see why I wouldn't believe him," he was seen and heard to say, until he tried to wriggle his way out of this blunder the next day by claiming he had meant to say "would" and that he had used "sort of a double negative". Altogether the stuff of some third-rate comedy, and funny if this was not the president of the United States with, at least in theory, the power to save us or doom us.

If this did not puncture the bubble of euphoria following the World Cup victory, a scandal from our very own Elysée Palace did. Starting as a seemingly minor incident where one of President Macron's bodyguards was filmed manhandling a demonstrator during the May Day riots in Paris, it soon ballooned into an "affaire d'état" when it became apparent that Alexandre Benalla, the bodyguard in question, had been wearing riot gear that identified him as a police officer when he wasn't. The 26-year-old Benalla was initially suspended for two weeks but kept his job, and it was only after Le Monde published a video of the incident that questions arose about Mr. Macron's security team and the highly centralized and vertical power structure of his office. How did Mr. Benalla obtain a police helmet and armband and a two-way radio? What was he doing at the riots when his job is limited to the personal protection of the president at home and abroad? Why did the Elysée not report the incident to the judicial authorities? Was it an oversight or a cover-up? As pressure mounted, Benalla was fired, but nothing stopped the snowballing news coverage and the growing demands for Macron to explain himself.

This was a golden opportunity for the opposition which called for a formal investigation. Macron's reforms agenda, with several parliamentary debates still scheduled before the summer break, was interrupted to answer the clamor for explanations from the left as well as the right. But even testimony from the Paris Police Chief and a number of ministers before the Commission of Inquiry failed to calm the waters and finally Macron, who had dismissed the Benalla incident as a storm in a teacup and accused the press of acting like a judicial power, broke his silence and said at a party meeting: "If they want a guilty one, he stands before you. They can come and get me. I answer to the French people." These were his last words on the matter before his busy agenda took him to long-standing foreign meetings and ultimately, in early August, to his own summer break at the presidential retreat of Fort Bregançon where his first-day guest was Theresa May for an informal Brexit meeting.

Even though August is shut-eye time here and serves only to recharge your batteries for La Rentrée in September, there is a movement afoot to keep the Benalla affair alive and to "get Macron" when government reopens. #AllonschercherMacron is their hashtag and it has started trending, turning this initially minor incident into the first serious challenge to Macron's presidency. He is nosediving in the polls, accusations of "arrogance" have resurfaced, and the combined efforts from the extreme right and left to make Macron pay may well affect his reforms program come September.

The image of Jupiter - Roman god of the gods, powerful and above the fray - that Macron invoked in his presidential campaign has come to haunt him. Meant to contrast with the disastrous "normal" presidency of the indecisive François Hollande, the allusion has since been interpreted as imperial and too lofty. Even after a successful first year in office, the young president-in-a-hurry, surrounded by his entourage of relative newcomers who have no debts to the old political order, has been unable to shake the label of 'president of the rich' and 'out of touch with the common people'. Perception is reality, as Public Relations 101 teaches us, and Jupiter will have to come down from his cloud and face his accusers with some convincing counter arguments and, perhaps, a touch of humility. Especially now that respected foreign publications (NY Times, The Guardian, The Financial Times, Der Spiegel and even The New Yorker) have taken on the Benalla story, this is no longer the 'storm in a teacup' it may have seemed some time ago.

No rest for the weary:  Macron's preferred holiday reading of philosophy and poetry may have to make way for crisis management this summer.

After weeks of an unrelenting heatwave across much of Europe and as far north as the Arctic Circle, la canicule has become a daily item on French radio and television. Unusually high temperatures, with an all-time record of 48°C (118.4 F) in southern Spain and Portugal, have affected tourism and stretched public services. Our personal high in our 20 years in Aix-en-Provence was 41°C and the entire tinder-dry south is on high alert for fires, especially when the mistral blows. Noxious algae are proliferating, fish are dying, asphalt is melting, and in Holland warning signs have been posted on the bicycle paths where sand between the paving stones has turned to powder, loosening the stones and creating dangerous conditions.

The memorable heatwave of 2003 that killed 15,000 people in France began in May and lasted a record five months, but today's temperatures are higher than ever before and, according to experts, are a sign of what's to come. Perhaps next summer we'll head for the hills.

Hoping for our sake and yours that we will soon wake from this sweaty nightmare, I wish you all a happy vacation, wherever it may be. See you in September.

Posted by Anne-Marie Simons at 5:03 AM No comments: