FEAR AND LOATHING ON THE STREETS OF FRANCE

On this perfect day in the holiday-sprinkled month of May, my view from a sunny terrasse in the old city center is one of peace and well-being all around:  it's warm but not hot, the severely cut-back plane trees of winter are sprouting their lush foliage again, soon to form the cooling green canopy over the beautiful Cours Mirabeau where people-watching while sipping a drink at a sidewalk cafe is one of the many simple pleasures of this city of Aix-en-Provence. From a quiet corner of my favorite café, enjoying a little muscat, all seems well with the world, at least this world I have chosen for myself. And yet… 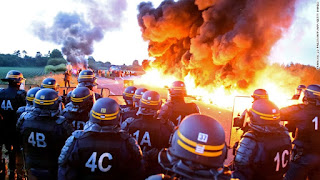 Just beyond earshot lurks la gronde, the muffled sound of one of the longest protests I have known here that shows no sign of abating. What is it that seems to motivate the marchers not to give an inch this time, and instead harden their position against President Hollande who has said he would never back down from the El-Khomri labor law that he passed by decree after two months of negotiations and more than 400 amendments? Students were the first to take to the streets in protest against the use of the "undemocratic" article 49.3 of the French Constitution that allows a law to be passed without parliamentary approval. Their Nuit Debout movement soon grew to include adults and finally seven labor unions of various political stripes. Today the CGT, biggest and oldest of the unions, with an important membership in the public sectors of transport and energy, has taken the lead in demanding the recall of the hated new labor law, backing those demands with blockades of oil refineries and walkouts at nuclear power plants. Result after 8 days of action: 20% of all gas stations are dry and electricity production is down by 7%. Collateral damage: disruption of rail and air traffic, hotel and holiday cancellations, and growing violence between police and demonstrators with victims on both sides. 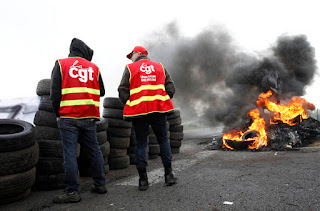 Even though the CGT represents only 8% of French employees, it speaks for all those who fear the new labor law. This includes a majority of the French, who instinctively resist any change even though many of them would agree that labor reform is necessary and overdue. Spurred on by this public support and aware of the unpopularity of a beleaguered President Hollande facing re-election in 2017, the CGT has vowed to keep the strikes going until the new labor law is withdrawn, while Prime Minister Manuel Valls has declared that such withdrawal is simply out of the question. Who will be the first to blink?

After it moves through the Senate, the El Khomri law will return to the National Assembly on June 14 for final deliberation and adoption by the end of July. The government, weakened by a significant defection in its own socialist party, has just given a timid hint at the possibility of re-discussing a particular point of the already watered-down law while categorically refusing to repeal it or alter its intent. The CGT union wants nothing less than a total retraction. For now it's a standoff, with more travel disruptions and shutdowns announced for the coming week.

If the strikes continue they are bound to affect the month-long European football championship starting on June 10th, which is expected to draw two million visitors and world-wide press coverage. Police and security forces have been on high alert since the November terrorist attacks in Paris and the state of emergency will be maintained until after the UEFA Euro Cup. Securing the various match venues will be a challenge for the police, and handling simultaneous strikes would be an added problem for the government.

If, however, the labor dispute is not resolved when schools begin to close in June and millions of people drive south for the summer holidays, public support of the strikers is likely to turn into opposition. Unions know that demonstrations and holidays are incompatible. The government clearly hopes for a public turnaround against the strikers. 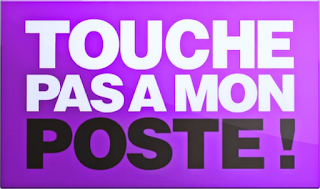 Introducing reforms in France has always been difficult and at least three earlier governments have also failed in their attempts at reform. The problem then and now: the generous social benefits that France can no longer afford today. Originated or expanded in the post-World War II period of uninterrupted growth that lasted 30 years and made the country rich, the welfare state bloomed and gave birth to universal health care, generous family allowances, paid vacations that grew from two weeks in 1946 to five weeks in 1982, and more. As the economy started slowing down with the oil crisis of 1975, and the burden of these public expenditures grew as a percentage of France's GDP, efforts were made to control and reduce some of these benefits. The violent protests that followed made it clear that the original "acquired rights" were considered life-long entitlements and would not be relinquished without a fight. Touche Pas! became the battle cry of the well-protected French workers, deaf to the government's pleas for greater competitiveness, and ill-disposed to make way for young job seekers who are strung along on short-term contracts, if they are lucky, with little hope for a career. Companies are not hiring longer-term employees because it is too expensive to fire them. Hence the greater flexibility in the hiring and firing rules of the new law, aimed at job creation and reducing unemployment which stagnates at 10% (24% for youngsters).

Even though the past two months have seen a slight decrease in the unemployment level suggesting that his employment policies may begin to bear fruit, Hollande's approval rating remains at an all-time low and his next move will be closely watched. If he holds firm against the unions, he may gain support from the center right that favors the labor reforms, but if he gives in to the CGT he will lose the last bit of credibility he has. 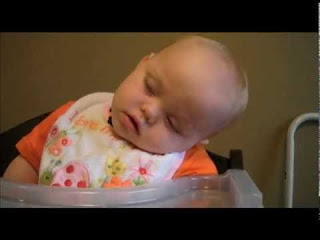 May the next few weeks bring him counsel.


And may the violent protests soon calm down, the stinking tire burnings stop, the blockades be lifted and cool heads prevail…
Oops, I must have dozed off and started dreaming.

In times of social upheaval the French tend to seek refuge in the long-gone days of France's grandeur, still present in her glittering palaces and halls of mirrors that reflect a thousandfold her kings' power and achievements, and the reach of French refinement and culture across the world. As if desperately trying to find answers in this glorious past they face the brash new world of money with a certain trepidation, ill equipped to battle it out for market share and economic dominance. They would rather be covered with esteem than with money.
Where in America being rich may be seen as a sign of success, in France it is rather seen as a sign of greed. Having pots of money is "not done" here. It will be up to the next generation to change this perception, while the older ones make the best of what is left of a welfare state that finds itself increasingly under pressure.

In the meantime, this beautiful country still offers an enviable quality of life today; let's hope it lasts.  And, of course, we'll always have Versailles.