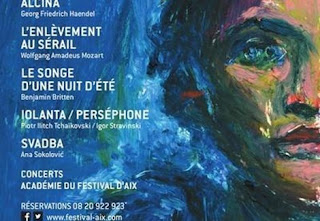 I promised to write about our July opera and here it is in a nutshell:
the 2015 edition of this annual Festival d'Art Lyrique was exceptional, with four beautiful productions and one ugly, off-putting one that I walked out of.

For Mozart's ABDUCTION FROM THE SERAGLIO, Austrian director Martin Kusej had the bad idea to transplant this lovely Singspiel to a jihadist camp in the Sahara desert where Konstanze and her servants Blonde and Pedrillo are being held hostage by Pasha Selim in a Bedouin tent guarded by a dozen machine-gun-toting terrorists. Chief guard Osmin threatens to behead them with a scimitar.

In France, we vividly remember the tense days last September when Islamist terrorists kidnapped a French tourist guide in Algeria and beheaded him. More recently, on home ground, a businessman in the Lyons area was kidnapped at his place of work and driven to the site of a nearby chemical plant where the kidnapper beheaded his victim, hung the head and an ISIS flag on the entrance gate, and then tried to ram his vehicle into a chemical storage tank which failed to explode. And who can forget the murderous attack by Islamic extremists on the offices of satirical magazine Charlie Hebdo in Paris last January?

This Entführung (Abduction) was performed in the original German, but director Kusej had taken the liberty to insert references in English to the rapacious West that robs the Arab world of its oil, completely changing the tone of the libretto and making it political, aggressive, and inconsistent with Mozart's text and intent.

First performed in 1782, the Abduction had the then-popular orientalist theme of a turquerie − a lighthearted and often comic treatment of the "exotic" culture of the Ottoman empire which not so long ago had been a military threat to Austria. It was the European view of orientalism − of harems and libertinage, of janissaries and stereotypes of Turkish despotism which Mozart brilliantly countered by a selfless final act of forgiveness and tolerance on the part of Pasha Selim who had fallen in love with Konstanze but sets her free.

When Festival Director Bernard Foccroulle saw the first rehearsal he asked Martin Kusej to remove certain scenes, which Kusej objected to in the name of artistic freedom. Finally, a compromise was reached and the final scene now shows Osman throwing down the bloody clothes of murdered hostages rather than their severed heads. Not reassured, Foccroulle then took the unusual step of calling for increased security (all bags were inspected at the entrance) and making an announcement before each performance referring to his personal differences with director Kusej's interpretation and asking the audience to make their own judgment.

That judgment was uniformly negative, ranging from shock to outrage. Even the critics were harsh, though some were careful to spare the singers who valiantly fought their way through the horrible staging and poor lighting of this mutilated Mozart.

Luckily, the other operas were just the opposite: delights for the eye and ear.

For openers, ALCINA by Haendel with inventive sets and imaginative staging by Katie Mitchell. A tour de force of singing by Patricia Petitbon in the title role in an unabashedly sensual performance. Multiple sequences of tie-me-up, tie-me-down and beds being made and unmade at a furious pace, sometimes pushing the erotic envelope but never going over the top. All this so the pleasure-seeking Alcina and her sister and fellow-sorceress Morgana can seduce all comers and then transform their lovers into stuffed animals to be shown off in taxidermy display cases. The very clever sets showed the unconscious lover sliding into a wicked machine and coming out as a stuffed animal.
Alcina, magic at its best. A triumph.

A MIDSUMMER NIGHT'S DREAM by Benjamin Britten, staged by Robert Carsen. The enchanting sets were just as beautiful and effective as they were in 1991 when Carsen first created this production for Aix-en-Provence. Nothing was changed; proof that a thing of beauty need not be updated to retain its appeal. Widely applauded by public and critics alike.


IOLANTA by Tchaikovsky and PERSEPHONE by Stravinsky. These two one-act operas were performed together, beautifully staged by Peter Sellars with sets that served both pieces. An achingly romantic and moving Iolanta that brought the audience to its feet was followed by the poem Persephone, written by André Gide and set to music by Stravinsky.


Persephone was read by French actress Dominique Blanc and "danced" by a small troupe of Cambodian dancers. Magnificent.

For a video  interview with Dominique Blanc and Peter Sellars in Aix, click here: 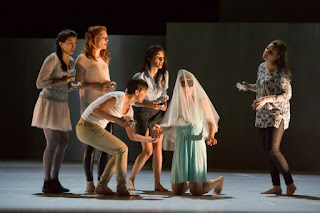 SVADBA is an a capella work for six female voices written by Serbian-born Ana Sokolovic who lives in Montreal where she teaches composition. Svadba, which means Marriage, is the story of a group of girlfriends getting together to say goodbye to one of them who is getting married. Sung in Serbo-Croatian (subtitled). A wonderful surprise.

If any of these productions come your way, run to see them.

We're well into the second month of a heat wave, which is getting hard to handle for those who, like me, don't have air conditioning. Many of the older houses in the center of Aix have no central AC and people make do with ventilators. But my husband and I decided a long time ago that our best defense was going to the movies, which we do every afternoon. Luckily, we have three movie houses with multiple theatres right in the center of town where we must have seen at least two dozen films in the past month. You return to a hot apartment, take a cool shower and make do until you can open all the windows for a bit of a breeze. 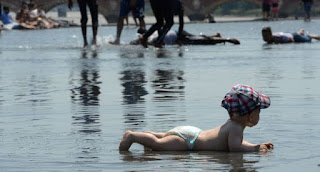 Want to know how hot it is indoors? I have a rather artsy necklace made of thin rubber disks. When I pulled it out of a drawer the other day I found a stuck-together lump. With careful untangling and a dusting with talcum powder I managed to limit the damage to a few ruined disks, but I fear finding more surprises (sticky rubber-tipped ear clips?) in my drawers.
The Aix city government has its own problems and had to close the Public Finance building when the air conditioning system broke down. No tax or fine collection until the problem is fixed. 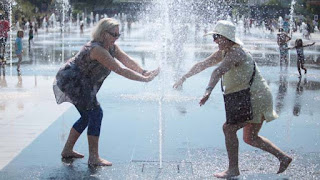 Trains have suffered significant delays due to buckled rails, and several French cities have endured their highest temperatures ever recorded, including Paris where the thermometer reached 39.7 Celsius (103.46 Fahrenheit). The most popular places on a hot day are the shallow wading pools that are a recent feature in cities like Nice, Bordeaux and elsewhere. Very effective for a cooldown and a lot more fun than air conditioning.

Our open-air operas start at 9:30PM when it may still be warm but no longer hot (except for the singers in costume), but the theatre festival in Avignon is taking a hit during this heat wave. More than 1300 plays are shown there during the month of July, most of them in the category Off throughout the day. Many of the temporary daytime theatres have no air conditioning and it pains me to see the actors and actresses who roam the streets, in costume and sweaty stage make-up, trying to lure the crowd to their hot little theatres. Some of our non-opera friends have come back with tales of overheating and it looks like this year, for the first time, I will not be going to Avignon for daytime theatre.

The only people who will not be held back by a mere heat wave are the French holiday goers who, like a line of unstoppable fire ants, move in a steady bumper-to-bumper column down the country's highways southward during weekends in July and August. Holiday rentals run from Saturday to Saturday, and people seem to prefer suffering painfully long days on packed roads rather than drive south on Sundays when only northbound traffic is dense.

Traffic forecasters invariably announce another weekend rouge throughout these two months, with the exception of a couple of notorious weekends noirs (worst category) in early and late August.

Makes me perspire just to think about it. I think I'm going to join those ladies in the fountain.


(*) To read more about Opera in Aix in my book TAKING ROOT IN PROVENCE click here:

Posted by Anne-Marie Simons at 3:04 AM No comments: