August is usually a month of relative calm in France. It's vacation time, even for angry demonstrators and politicians. Political or union organizers may be plotting as they bask on a sunny beach, but their actions are aimed at September when they'll re-emerge with the usual sound and fury in support of or in opposition to one cause or another. Not surprising then that during this summer vacuum a seemingly minor matter became headline news and grew into a divisive subject involving politicians, philosophers and human rights activists.

It all began when the mayor of Cannes, at the request of some of his constituents, banned the burkini, the full-body swimwear favored by some Muslim women, from his beaches. His example was soon followed by mayors of other Riviera resorts, and to date no less than fifteen French mayors have banned the burkini in their communities.

Initially, the burkini ban in Cannes was seen as a local incident in the wake of the Bastille Day massacre of 86 people by an Islamist terrorist in nearby Nice that had left the town's people jittery and sensitive to all things Muslim. At the sight of burkinis in their midst, a sense of Muslim invasion took hold of the vacationing beach crowd who called on their mayor for action, sparking the beginning of a quickly spreading burkini ban that soon reached Corsica. Here, in the small coastal town of Sisco, an encounter between a group of teenagers and three local Muslim families of Moroccan origin degenerated into fisticuffs when one of the teenagers photographed a Muslim woman whose husband objected. One of the teenagers called his parents and soon 200 villagers stormed the local North African neighborhood with cries of "This is our home!" Riot police were called in and the beach brawl ended with four people in hospital, five others arrested, and a burkini ban in Sisco.

Suddenly, the burkini was no longer a local issue and was even picked up by foreign newspapers. Voices began to be raised for and against the ban, with pro-ban arguments ranging from "the burkini is unhygienic" to "not in line with our French values" and "a form of suppression of Muslim women by their men".

One may well ask Why unhygienic? - but perhaps it's best not to. One may also question the French Values, especially in matters of beachwear: topless women? string bikinis? big-bellied men in tiny Speedos? Let's not go there.  And as for the burkini as a form of suppression of Muslim women's choice of dress, this matter of cultural difference was perhaps addressed most delicately by the mayor of Nice when he said that he had banned clothing that "overtly expresses adherence to a religion at a time when France and its places of worship are the target of terrorist attacks." The July 14th mass killing in his city and the subsequent murder of a Catholic priest as he was celebrating Mass in his French village church had left raw wounds that have not healed yet. France remains cautious and on edge.

Prime Minister Manuel Valls said he could understand the mayors' decisions and came out in support of the burkini ban, saying the garment reflects the "enslavement of women", while Laurence Rossignol, French Minister for families and women's rights rejected the burkini as "archaic" and "intended to conceal the body of women". 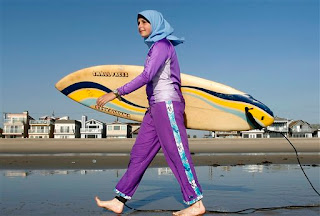 With these views the Socialist party joined those of the extreme-right National Front party whose leader Marine Le Pen supported the burkini ban, saying "The soul of France is in question here. France does not lock away a woman's body; cover up half its population."

So much for political positioning in anticipation of the 2017 presidential elections, as an increasingly crowded field of presidential candidates is gathering both on the left and the right. After the devastating string of terrorist attacks on their soil, nervous French voters are looking for reassurance from a strong leader who can inspire confidence and a feeling of safety that is lacking today. 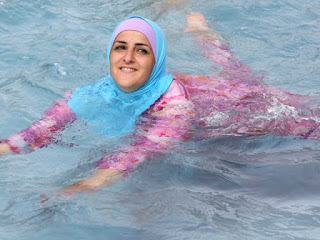 On the other hand, many support the right of a devout Muslim woman to wear the full-body burkini for bathing in public, even if it sets her apart from other bathers. Prohibiting the burkini would effectively exclude these Muslim women from access to the sea. The League of human rights (LDH) and the Collective against Islamophobia in France (CCIF) have filed an appeal with the Nice administrative tribunal to overrule the burkini ban because it goes counter the right to free speech, freedom of religion and choice of dress, and is disproportionate to the perceived threat it may pose. The tribunal is to rule before the end of the month.


France is a secular country where all religions are allowed, but where since 2004 the wearing of "ostentatious signs of religion" is forbidden in public schools.  Another law, voted in 2010, forbids face coverings by full burqa or niqab, or by ski masks, in all public spaces, and this for obvious security reasons. Neither one of these laws would prohibit the wearing of a burkini on a public beach, nor did these laws encounter strong opposition from the large French Muslim population at the time they were passed.


It is interesting to note that France's apparent distaste for the burkini in the name of its sacrosanct secularity contrasts sharply with the United Kingdom where popular department store Marks & Spencer has launched its own line of burkinis this year and rival store House of Fraser's has just responded with a competing line. In response to the French controversy, Aheda Zanetti, the Lebanese-born Australian inventor of the burkini says women buy her suit for different reasons (skin cancer, sun sensitvity, greater comfort than a wet suit) and that 45 percent of her clients are not Muslim. The burkini is all about choice, she says. Or as one of her clients put it: "It's just a swimsuit, for heaven's sake!"

Considering where we stand today in France − an unpopular president who is perceived as weak; an extended state of emergency after repeated terrorist attacks; proven inefficiency and lack of cooperation among French security services − it is easy to see why the relatively inoffensive burkini has become such a big issue this summer. It represents a facet of Islam, a subject that rightly or wrongly has created a certain nervousness among the French; it is a political plum, opportunely arriving just in time for use or abuse by the candidates in the pre-election activities beginning this fall; and it was the "only game in town" this summer.

Posted by Anne-Marie Simons at 11:29 AM No comments: