ONE YEAR OF GILETS JAUNES 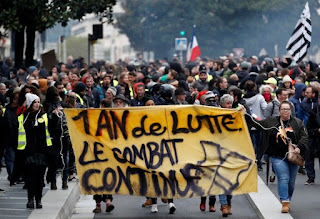 This past weekend brought back images we had not seen for a while, when the Gilets Jaunes held their 53rd demonstration on Saturday in Paris. Barred from the Champs Elysées, the marchers were assigned other areas, particularly the Place d’Italie where they gathered in the morning despite the local mayor’s plea to the police prefect to spare this square which was undergoing a renovation project. It was not long before the first clashes occurred as demonstrators began to throw up roadblocks against the police with the construction scaffolding and other equipment from these public works, and masked Black Bloc hooligans set fire to cars and rubbish bins, smashed shop windows, bus shelters, the entrance to a shopping center, and a bank’s glass frontage. When they attacked the firemen who rushed in to put out the fires, and the embattled police used teargas and water cannon to push them back, the police prefect, fearing further violence, decided to withdraw the authorization and called off the demonstration at 2:30PM.


With 28,000 demonstrators nationwide and 4,700 in Paris, total participation was low and no major incidents were reported at GJ marches elsewhere in the country that day. But even though a march the next day for the first anniversary of their movement was peaceful, the Saturday incidents in Paris showed again that the GJ’s raison d’être - a demand for fiscal justice and increased purchasing power for the lower and middle classes – has been hijacked by Black Bloc hooligans who are turning the public opinion against them.
Christophe Castaner, Minister of the Interior, commented that this Gilets Jaunes march was dominated by hundreds of violent outsiders from the extreme left and right who join these demonstrations solely to do battle with the police and destroy public and private property. He reminded us that street demonstrations are constitutionally protected in France and only allowed in designated areas, but outside interlopers rob the demonstrators from having their message heard. He did not offer a solution as to how to keep those interlopers out, which after one year and 53 demonstrations of this kind may be considered disappointing at the very least. 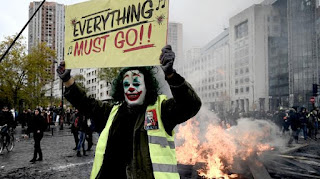 That disappointment is shared by many Gilets Jaunes who have returned to occupying roundabouts and toll gates where they distribute leaflets and make their pitch for continued support. It should not be forgotten that the leaderless, non-politically-aligned GJ movement was endorsed by the general public who backed their demands and caused President Macron to review his budget with a gift of €17 billion in tax relief and other aid. This major win for the GJ movement may be seen by others as a reason to harden their opposition to President Macron’s upcoming pension reforms. 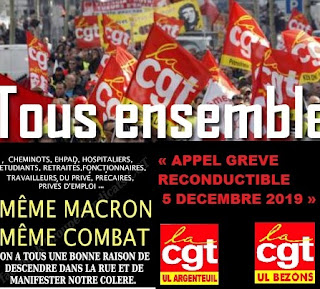 Starting with the train conductors who object to any change in their special privileges and early retirement, all transport-worker unions have joined them and announced an “unlimited” national strike on December 5th which is intended to paralyze air, rail and road transport. The Gilets Jaunes will join them in solidarity, as may public hospital workers if their current negotiations produce no results by December 5. The lawyers union with its 70,000 members has just announced a shut-down day of Justice morte on December 5 in protest against their announced reduced pension, and so has the teachers union. Public servants in various branches, including police, are making plans to join following their unsuccessful demands for better working conditions, and the CGT, France’s largest trade union, is urging members to join with demands of their own. The snowball effect may not stop there and a possible convergence of action is growing by the day. With transport unions prepared to “hold out until Christmas, if necessary,” December is sure to be marked by unrest, and this Christmas may not be a time of Peace and Joy – at least not in France. 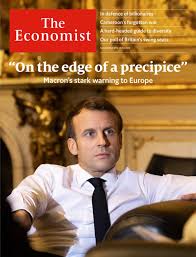 With the looming pension reform battle just weeks away, President Macron is preoccupied with another peril – that of the changing geopolitics of America and its growing disinterest in Europe and NATO. Gone are the days when Europe could count on America as a staunch ally in peace and war, when treaties were respected and diplomacy was valued. Today, the American president’s unilateral decisions, particularly the abandonment of his Kurdish allies in Syria, make it clear that we must get ready to go it alone and build up a European military force, says Emmanuel Macron.

In a recent interview with THE ECONOMIST that drew criticism, a frustrated Macron spoke of NATO as “brain dead” and Europe “on the edge of a precipice.” He saw Trump’s troop withdrawal from Northern Syria without consulting his allies as a sign that America may be “turning its back on us” and lamented NATO’s inability to prevent Turkey’s subsequent cross-border offensive against Kurdish forces. It is time for Europe to stop acting like a junior ally of America in the Middle East, he said. With Europe on the edge of the precipice, if we don’t wake up we will have no geopolitical future and risk losing control of our destiny.

Commerce and trade have assured peace in the past but as America turns protectionist this will no longer be enough. With authoritarian regimes like Russia and Turkey on our European borders, slow-moving Europe has to get its head out of the clouds and realize we must prepare for our own defense in a tougher world. This would require opening up relations with Russia, which the east-bloc countries might resist. There also is a role to play for Europe as a buffer between the American and Chinese giants, but getting 27 countries to agree on these and other issues will require a high degree of diplomatic skill. 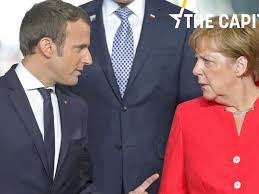 One of the first reactions to Macron’s interview came from German Chancellor Angela Merkel who acknowledged certain problems he raised but said Macron’s words were “too drastic and not my view of the situation.” Ahead of a key summit in London early next month on the occasion of the 70th anniversary of the alliance that will be attended by President Trump, NATO chief Jens Stoltenberg said NATO was “strong, even though we have problems and need to pull together.” Others felt that Macron was right to draw attention to the urgent need for a reassessment and to shake the alliance out of its lethargy. Although the tone of Macron’s message may have been considered blunt and his words “brain dead” objectionable, few disagreed with the content, and in the end the criticism seemed mostly one of form over substance. In diplomacy as elsewhere, C’est le ton qui fait la musique.

Macron, who sees himself as the leading man of Europe, may have kicked an anthill but if his aim was to provoke a reaction, he has succeeded. The December summit may tell if he went too far.

After a record-breaking summer of excessive heat in much of Europe, winter had an early start in France this year. In early November, winter storm Amélie lashed the Atlantic coast with rain and winds exceeding 100 miles/hour, causing flooding, and disrupting train and ferry traffic. As it moved eastward, the storm caused a mudslide in Nice that killed a 71-year-old woman in her home. A week later, heavy early-season snowfall paralyzed the southeast of France and left more than 300,000 homes without power. Seven départements were put on Orange snow-ice alert. One man was killed in Isère when he tried to remove a fallen tree and another tree fell on him. A second man who was helping him was injured. In the Drôme region 3,500 homes are still without electricity today. It is highly unusual for this kind of severe weather to occur in the south of France in early November before winter has officially started.

Meanwhile, nearby Italy is suffering its own share of weather-related misery this month. Venice measured the highest floodwater levels in more than 50 years when aqua alta covered three fourths of the city and the rising waters on St. Mark’s square briefly topped six ft. High tides and heavy rains have battered Venice for ages and the multi-billion-euro Moses project of a mechanical barrier to keep the city from flooding has been floundering since its inception in 2003. Its initial completion date of 2011 has repeatedly been extended and is now expected in 2021. Corruption and mismanagement are blamed for this failure and global warming is only adding to the headache. Other cities have had problems as well, notably Florence and Rome, where the Arno and the Tiber burst their banks, and coastal areas have sustained considerable damage from flooding and mudslides. 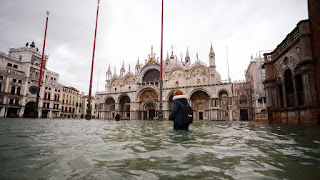 Italy's environmental watchdog organization Legambiente paints a bleak picture in its recent report "The Climate Has Already Changed" of the Italian peninsula which faces rising seas on three sides. There is not much that can be done against nature’s violent force, it says, but places much of the blame for the current disasters on years of government complacency. The authors cite budget cuts and several years of deadly earthquakes that soaked up funds which led to a total lack of preparedness for climate-related disasters. ”We are the only large European country without a climate plan,” they say, pointing out that Italy spends four times as much on damage repair as on disaster prevention, with the notable exception of one preventive measure when it closed down the Italian side of the Mont Blanc earlier this year due to the threat of the glacier breaking apart.

Today there is no more room for doubt:  the results of global warming are visible all around us and decision-makers today would do well to take Greta Thunberg's warnings to heart. This quiet but stubborn young girl, whose cry for climate action was heard around the world, is currently making her second ocean crossing on a catamaran sailboat to rejoin Europe and the next UN climate conference in Madrid in December. If her advice to “Follow the science!” has yet to convince the likes of Donald Trump, whose vision is impaired by dollar signs, a look at the astronomical bills that Italy is currently paying for ignoring global warming signs may convince them. Act Now or Pay Later still holds, even if selfish politicians may yet choose the “later” when they are no longer in office. We will all be paying their bills, but only until the next elections. 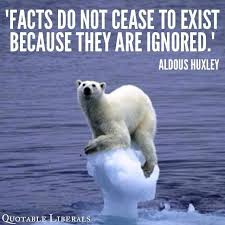 Posted by Anne-Marie Simons at 8:20 AM No comments: