After its summer break the French government reconvened in Paris in late August to discuss the budget and outline the roadmap for 2019 — year of all dangers with the May elections for the European Parliament, the finalization of the Brexit deal in March, and the threat that growing nationalism in the EU may result in a strong increase in far-right seats in the EU Parliament in Strasbourg.

Of particular concern is the hardening of the anti-immigrant stance in Italy, Hungary, and more recently Sweden, as well as a recent outbreak of violence in the German city of Chemnitz where far-right and leftist demonstrators clashed following the stabbing death of a 35-year old German man, allegedly at the hands of an immigrant. The riots lasted two days and caused a number of injuries before an underpowered police force managed to retake control. There have been several flare-ups and the tension remains high. These clashes show the strength of the anti-immigrant Alternative für Deutschland (AfD) party with its threat to the fragile coalition government headed by Angela Merkel, and the clear shift to the right since 2015 when Merkel's Open-Door policy drew one million refugees to Germany.

More than ever, French president Macron seems to be the last man standing in the fight to preserve and strengthen the European Union, and among his first post-holiday actions was a four-day salvaging trip to Denmark and Finland to try and push them to more involvement in the EU and greater participation in Europe's defense post-Brexit, citing changing trans-Atlantic relations. 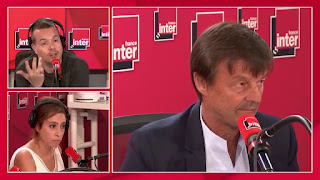 The importance of these state visits was momentarily overshadowed by an incident back home, when on 28 August (as Macron was on his way to Denmark) France's most popular member of the government, Ecology Minister Nicolas Hulot, suddenly announced his resignation on a morning radio program. As he was being interviewed by two journalists on France-Inter, an increasingly frustrated Hulot suddenly announced: "I am going to make the most difficult decision of my life. I am leaving the government." It seemed a spur-of-the-moment decision but one that had long been simmering and that he had not shared with president Macron and prime minister Edouard Philippe "for fear that they would talk me out of it once again." He then listed a number of disappointments and frustrations of his 15 months in government, including the final realization that the Macron-Philippe team "for whom I have the greatest admiration and affection" would never accord Ecology the urgent attention it deserves because today the worlds of Economics and Ecology are simply incompatible.

It appeared that the final straw may have been the ministerial meeting of the day before, where Hulot noticed the presence of a lobbyist for the National Hunting Federation, a one-million strong voting block. Among the issues on the table was the hunters' demand for a 50 percent reduction of their hunting-licence fee as well as the addition of several more migrating bird species to their hunting list, all strongly opposed by Hulot. The hunters won on both counts, and Ecology suffered another defeat in the service of political bargaining.

"Lobbyists have no place in a ministerial meeting," was all Hulot would say at first, but when pushed he added that he felt alone in his fight, without formal backing, and that neither the government nor the public seemed able to grasp the severity of the situation. We have let several opportunities for decisive action pass because the political support was not there, he said. Reminded of a few successes he has booked nevertheless, he said they were not enough. Moving by little steps does not get us to where we need to be if we want to stop, let alone repair, the daily damage to our planet. Global warming was predictable and the warning signs have been there for many years. Today the planet is an oven, disastrous fires and record-breaking temperatures this summer in many parts of the world and destructive floods in others, are a picture of our future. We have wasted precious time and from now on, anything we can do to reduce global warming will be more expensive and less effective because much of the damage done is already irreversible.

When told to be patient he answers that he has been patient for 30 years, during which time large areas of Africa have suffered such severe repeated droughts that whole populations have been driven from the parched lands where they used to grow crops or raise cattle, and forced to join the stream of migrants northwards, to Europe and elsewhere. "I can no longer lie to the French people or to myself," he said, barely able to control his voice as he suddenly announced his resignation. It was a dramatic moment, all the more so on public radio. 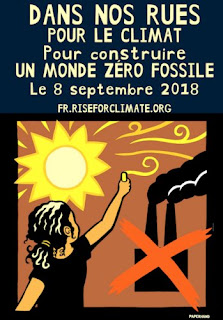 Nicolas Hulot, who became famous for his nature films and Ushuaia TV show, has long been an ecological activist. He created his own foundation in 1990 and always managed to remain independent. He turned down offers from presidents Chirac, Sarkozy and Hollande before President Macron managed to persuade him to join his government. Perhaps Macron's youth and promise of reforms did the trick, but in the end Hulot's visceral fears were borne out: Ecology and a liberal business agenda make poor partners.

A profoundly disappointed Hulot admitted that he had not been able to work effectively within the constraints of politics and that he may not have the makings of a Minister. In leaving, he expressed the hope that his departure would not be politicized but might serve as a wake-up call. Individual efforts are no longer sufficient; it will take a massive public outcry to stop global warming. "Where are my troops? Where is the public support?" he had complained in his resignation speech. 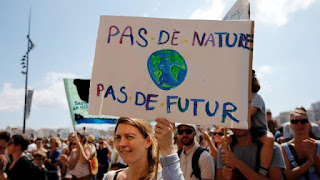 A well attended March for the Planet held throughout France yesterday was a hopeful sign that the wake-up call was heard, as many thousands took to the streets in support of Hulot and his fight against climate change. Large numbers of young environmentalists as well as a number of NGO's joined forces in marches in Paris and other French cities, urging the government to act NOW and promising to keep the pressure on. Their message: If governments cannot do it, citizens will have to take over to force us off the path to self-destruction we are on today. If the political will is there, Economics and Ecology can and must co-exist.

Early September is the time of La Rentrée in France, when children return to school and government ministers to their respective offices. What in July still looked like a smooth return to the Macron Reforms program after the summer break, had turned into a more complicated situation by September. The upheaval caused by his bodyguard Alexandre Benalla (see August blog) and the very public resignation of Nicolas Hulot have caused a lot of ink to flow. Then, a week after Hulot, Sports Minister and Olympic fencing champion Laura Fessel resigned "for personal reasons" and Culture Minister Françoise Nyssen's future is hanging in the balance over unauthorized changes to a protected historical building she owns in Paris.

Barely into the second year of his mandate, Macron's cabinet, with its mix of experienced politicians and youthful newcomers, has lost some of its luster, and the pace of the Reforms agenda has been slowed down by growing opposition and disappointing economic results. The latest polls show Macron's approval rating down from an early high of 66 to an all-time low of 31 percent today.

The honeymoon is over and the pressure is on. It remains to be seen whether his efforts to prop up the European Union (Brexit, immigration, growing nationalism) and the upcoming elections for the EU Parliament will turn into his favor and regain him some credit. He has been making the rounds of EU capitals to that effect. Last Thursday he traveled to Luxembourg to meet with the prime ministers of The Netherlands, Belgium, and Luxembourg on efforts to deepen European integration. The next day he hosted Angela Merkel in Marseilles to seek her backing on migration and EU institutional reforms. And on September 20 he will attend the informal summit of EU leaders in Salzburg, Austria, where cooperation on immigration will be at the top of the agenda. There is work to be done to relight the fire that sparked this beautiful project of a United Europe.

Despite concerns about Brexit, growing nationalism, and climate change, it is not all gloom and doom here. First of all, the summer heatwave is finally over and we are now enjoying the best of all conditions: warm, sunny days with cooler nights and mornings. France survived the long summer without major fires or floods, and the sometimes overwhelming flood of tourists has dwindled to more pleasant proportions.

Another source of joy:  the guest of honor at this year's annual Aix-en-Provence literary festival in October will be Turkish author Orhan Pamuk, the 11th Nobel Prize winner to attend our three-day Fête du Livre!

Hurrah for France and the place it accords Culture, an essential part of its art de vivre. 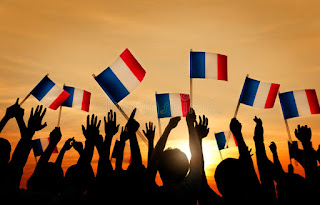 Posted by Anne-Marie Simons at 11:30 AM No comments: