Let’s start with year-end 2010 and the very different ways France and the US celebrate Christmas. French Christmas is all about food, and the most important meal of the year is Christmas dinner, which is often eaten on Xmas Eve. For weeks all media talk about this meal and all TV news channels feature shows where famous chefs prepare part or all of the special Christmas dinner. Advertising focuses heavily on the luxury end of the food chain: truffles, caviar, champagne, and fine chocolates. This emphasis on food cuts across society, and each within his budget will produce an exceptional dinner this one day of the year. Gifts are exchanged, like anywhere else, but the gift of a spectacular dinner may give the French the greatest satisfaction of all.
Oh, and the French don’t do Christmas carols, don’t deck the halls, don’t do office parties and don’t send out cards. Christmas decoration is usually limited to a tree and a nativity scene, which in Provence may include the typical SANTONS made by local artisans. These are figurines sculpted from wood or clay, painted or natural, that represent village people, a shepherd, the miller, the mayor with sash, or the baker with a bag of flour, on their way to the manger. Some churches have life-sized santons that may carry gifts of lavender, wheat or olives.

Epiphany: January 6th marks the end of the Christmas celebrations. Called La Fête des Rois in France, on this day we eat a traditional cake in honor of the three Magi: la GALETTE DES ROIS. In fact, this galette is sold in all French bakeries throughout the month of January. The galette is a round puff-pastry cake that is filled with almond paste and contains a fava bean. The person who gets the bean will be king or queen for the day and receives a paper crown.

Some people prefer the COURONNE DES ROIS, a brioche-like ring of pastry studded with candied fruit.
We were surprised to discover that Provence can be quite cold in winter, especially when the Mistral blows, and that snow is rare but not unknown here. In fact, last year the city of Marseilles was completely paralyzed by a snowstorm because there is no snow removal equipment here. 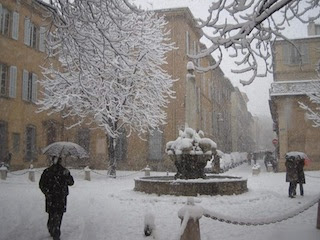 WARNING: With apologies for the interruption, I would like to point out that in this blog I will be referring occasionally to my book "Taking Root in Provence" (2011). In doing so, I am aware of the possibility that you may end up on Amazon.com where the book is for sale, and I want to warn you NOT to buy my current book together with an earlier one called "Ten Years in Provence" (2008), no matter what Amazon says. "Taking Root" expands on and replaces "Ten Years" but unfortunately I cannot remove the earlier book from Amazon where it will stay until the stock is depleted. Appeals to Amazon to remove their statement that these two books are "Frequently Bought Together" have been unsuccessful.


France is a lay country but it continues to celebrate many feasts of a religious nature. Among the oldest and most important is the Fête de ST. MARCEL, also named Les Tripettes, celebrated in mid-January in the village of Barjols where he is the patron saint. During these festivities a bull is roasted on a spit to commemorate the bull that saved the village from famine in 1350, and everybody dances the Tripetttes, a dance named after the bull’s tripe. (Yes… it’s a long story). The colorful festivities last two days and attract huge crowds. (*)

(*) Every month has several celebrations of saints, foods or animals. To see Taking Root in Provence for a description of these traditional feasts throughout the year, click here.
Posted by Anne-Marie Simons at 12:33 PM