The case of DOMINIQUE STRAUSS-KAHN, accused of assaulting a hotel maid in New York, has caused a stir on both sides of the Atlantic with markedly different public reactions. In the US a rich, womanizing public figure would have little chance before a jury, while in France DSK remains a man of considerable accomplishment whose dalliances are seen as a “boys will be boys” kind of petty flaw or even as the characteristic of a great seducer. The initial shock at seeing their man in handcuffs doing a perp walk in front of the cameras of the world shocked the French and was roundly condemned as brutal and savage. “Innocent until proven guilty” means don’t show him guilty until you have proof, say the French, and sending him to Riker’s Island was meant to humiliate him and bring him down a notch to please the public and the voters. 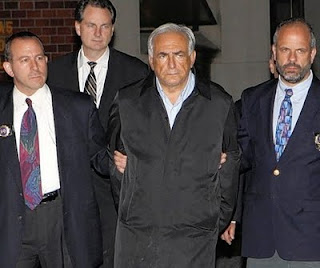 As the story evolves, the perception of American vs. French legal systems is becoming clearer. While a former French Minister of Justice had declared earlier that she was “glad that in France we have a different system” it is now nevertheless accepted that there is something to be admired in the equal treatment meted out in America, whether you are a VIP or a nobody. It is even admitted that in France this would not be the case, particularly for the offense that Strauss-Kahn is accused of. A certain droit de seigneur seems to have survived the ages and a “great man” would not be brought down in France for what is still generally considered a peccadillo. Boys will be boys indeed.
To be continued…
In another area, here's another difference between France and America. We had a car accident here where a distracted driver sideswiped our car, doing significant damage to two doors. A passing policeman asked if anyone was hurt and when told that was not the case, he got back on his motorbike and took off. I had hoped that he would draw up a police report for our insurance company, but it turns out that such a thing is not necessary here. Each driver is supposed to carry an accident form in his car that is filled out and signed by the parties involved in case of 'material damage only'. The insurance companies do the rest. While our car was being repaired we received a replacement car and we never saw a bill. No need for lawyers. How simple - how nice - how cost saving.


DID YOU KNOW…  that a “walkie-talkie” is a “talkie-walkie” in French?  :-)
For some unusual French/English translations in Taking Root in Provence, click here.