The Americans are Coming! Le Train Bleu, Christmas Here and There, DSK

What's this??
After the invasion of cupcakes, a new American food item is currently making inroads into the French food chain: bagels. This most American of breads is the newest kid on the block and joins donuts, pretzels (called "bretzels" here), cheesecake and of course "le 'amburger" and "le 'ot dog" as a mid-day meal that is much appreciated by youngsters, among them the numerous American students in the area. In Aix-en-Provence alone, two bagel shops have opened - Bagel Story and Comptoir du Bagel - that are doing steady business and seem to have found their niche. Both shops, one in the old center of Aix, the other on the outskirts, have their bread brought in from New York, and both have a rather large "bagel menu." Priced around 5 euros, the bagel is not cheap (about $7.00) but with its choice toppings makes a meal at lunchtime where it is currently competing with panini and that eternal old-timer: the "jambon-beurre." 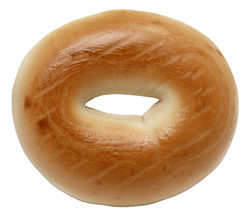 A recent French newspaper article on this item claimed that the bagel was invented in 1683 by a Viennese baker to honor king Jan III Sobieski of Poland-Lithuania who beat back the invading Ottoman Turks from the gates of Vienna with a charge of his cavalry. The somewhat unevenly round bread with a hole in the middle is meant to represent a stirrup - a "Bügel" in German. I'll accept this French version, even though several other interpretations exist that claim even older origins than this one, mostly with a Yiddish etymology. A rose by any other name...

On a recent stopover in Paris we had lunch at the restaurant Le Train Bleu at the Gare de Lyon. We tend to schedule our arrivals or departures on the TGV Aix-Paris in such a way that a leisurely lunch at this spectacular restaurant can be included in the trip. There certainly is better food to be found in Paris, but I doubt that there is a more elaborate restaurant decor anywhere. The eyes have it here - and the taste buds won't complain either, perhaps because the eyes are so busy taking in the surroundings. The Gare de Lyon station was built as part of the Paris Exhibition of 1900, and a year later its Buffet (restaurant) was opened by the then-President of France. The most distinctive feature of Le Train Bleu is its Belle Epoque decor, including painted ceilings and murals depicting different sites along the north-south railway network. There are 41 paintings in all, covering every square inch of the large main dining room and the Gold Room, which after suffering the effects of years of smoke fumes from the steam engines have recently been restored to their original state. So exceptional is this restaurant that in 1972 it was declared Monument Historique by Minister of Culture André Malraux.


And the food? The formal dining room with its white tablecloths is rather pricey and especially appreciated by local businessmen, but the cuisine can be uneven. Even so, one stand-out dessert that never fails is their Baba-au-Rhum which, the waiter will tell you, was invented right here. It is generously dosed with rum when served, and the bottle is left on your table should you want another soak. For those travelers who only wish to have a quick bite and coffee (perhaps with a slice of "Grumble Cake" from their menu), a simpler room is available as well as a clubby side room with leather chesterfields and fauteuils. This exceptional example of Belle Epoque style is well worth a visit, whether you eat there or not.

CHRISTMAS HERE AND THERE

Christmas means pretty lights and street decorations, especially in the capital cities of the Western world and in their department stores. Paris, the city of light, does a pretty good job, but for my taste the Anglo-Saxons with their extensive use of natural greenery in wreaths and garlands and sprays take the prize.
In London last week I had a chance to see the magnificent Christmas decor at The Ritz hotel, both inside and out, and was struck by the perfect balance between opulence and restraint, with colorfully trimmed trees and lush garlands inside, and simpler greenery lit by little white lights on the outside façade and along the covered gallery. Another beautiful display can be found at Harrod's food court, where each food genre (game, fish, chocolates etc.) has its own Christmas decor. And who can forget the stunning window displays at Saks Fifth Avenue in NYC? I suspect that these "private" enterprises have bigger budgets than municipal treasuries, which may have suffered cutbacks. Yet, last year in Madrid, despite a severe financial crisis, I found the public Xmas decorations very impressive. All along one of the widest avenues brilliant, multi-colored disks hovered overhead and all the city squares had a large tree decorated by a different local artist. It was a dazzling display of creativity.


Coming back from London or Madrid at Christmastime to Aix-en-Provence (*) is a rude shock, not because this much smaller city cannot afford rich yuletide displays, but because it is increasingly favoring commercialism over the old traditions. From mid-November to the end of December, the Cours Mirabeau (the Champs Elysées of Aix) is taken over by a children's fair with merry-go-rounds, bumper cars, bungee cords, whistling reindeer trains, games with alarm-like whoops when a prize is won, and other divertissements that have no relation whatsoever to Christmas.

Between the long row of chalets selling trinkets on one side and the children's fair on the other side, the otherwise beautiful Cours is a noisy mess during the Xmas season. No Christmas tree here, no carols, no Santa Claus on the Cours or in department stores, no wreaths or stars - in short, no Christmas atmosphere. In this lay country, there is no public nativity scene and little reminder of the religious origins of Christmas, but the traditional Christmas tree came from Germany, after all, and has come to symbolize Christmas wherever it is celebrated. As for local Christmas decorations, let's just say that they are forgettable. Churches, on the other hand, often have a nativity scene peopled with hand-crafted Santons (sometimes life-sized) dressed in Provençal costume, and one local midnight Mass includes a real shepherd with a live flock of sheep.

Unfortunately, one recurring incident during the Christmas season is robberies. Oftentimes, warehouses are broken into at night and emptied of televisions, cell phones, toys and so on. The first such heist was just reported in the local newspaper:  27,000 bottles of Chateauneuf du Pape were stolen from their warehouse at Domaine Mayard. Lest we forget:  Christmas in France is mostly a matter of food and wine.

On a more positive note, the French Telethon, which is held annually in early December, hauled in a record number of pledges this year: nearly 87 million euros (12% more than last year). Throughout the year 2011, a total of more than 3.7 billion euros was donated to various causes in this country of about 65 million people, evidence once again that the French are among the most generous people in the world - even in difficult economic times.

For STRAUSS-KAHN followers - it has recently been rumored that he will be moving to Israel where he has been offered a position at the University of Tel Aviv. Presumably after he settles a little unfinished business in New York.

In wrapping up this month, I realize that I have come to the first anniversary of this blog. I'll allow myself a candle on my Sunday pastry and the wish that you have found it worth reading. If I am allowed another wee wish it would be that by your comments you will encourage me to go on - or discourage me, as the case may be. Truly, any comments or suggestions are welcome.

May you all have a Merry Christmas and a Happy and Peaceful New Year.

(*) Taking Root in Provence features a chapter on "Christmas in Provence." To take a look, click here.
Posted by Anne-Marie Simons at 8:05 AM