After an extremely mild early winter, in late-January we suddenly got a blast of cold air from Siberia that turned most of Europe - including southern France and Italy - into a snow and ice-covered winter landscape that quickly turned deadly. It is rare that we have sub-zero temperatures here for brief spells, but this time they not only lasted some two weeks but they dipped way below zero in a number of Mediterranean countries (minus 8 Celsius or about 18 F in Aix-en-Provence) where this is not supposed to happen. So far 540 people have died as a direct result of the cold, most of them in Eastern Europe, but many of them in Italy as well. In France, the power network is stretched to the limit and people have been asked to watch their consumption of electricity for fear of blackouts.


Life in the city is quieter:  less traffic, fewer people in the streets and fewer stalls at the market. Fountains in Aix have stopped spouting or dripping and have frozen into icy sculptures and stalactites. Snow removal and salting equipment is used on the main roads only, and some of the remoter villages are now accessible only by 4-wheel-drive vehicles and have not seen public transportation for a while.


In Holland, however, excitement is growing to fever pitch over this sustained deep-freeze in hopes that it will finally allow the famous Elfstedentocht (eleven-city tour) to be run again after 15 years of mild winters. This grueling 125-mile speed-skating race on frozen canals and waterways links eleven cities in the northern province of Friesland and requires thick ice all along the way to support the 16,000 registered competitors.

Two million spectators are expected to turn out for this near-mythical race in a country where ice-skating is second only in popularity to soccer. The race was tentatively planned for the weekend of 11-12 February but when the organizing committee pronounced on February 8th that along the track some patches of ice had not frozen to the required minimum of 6 inches and that the race may have to be cancelled, it brought the fans close to tears.
Fifty soldiers were dispatched onto the ice to sweep the snow (which warms the ice) and hundreds of volunteers took off from work to do the same. It's a race against time (temperatures are said to begin rising next week), but no one is wiling to give up just yet. The on-again off-again suspense continues, but in the meantime, the canals in Amsterdam have turned into a Pieter Brueghel painting of skaters, big and small, who may one day be good enough to run the Elfstedentocht. 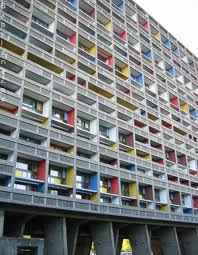 In the night of 9 February a virulent fire broke out in the famous Cité Radieuse in Marseilles - Le Corbusier's 7-story housing block consisting of 334 apartments that was designated as a historical monument in 1986 by the French Ministry of Culture. All 1500 occupants were evacuated, seven apartments were destroyed by fire and many others sustained smoke or water damage. This project built by Le Corbusier and opened in 1952 was his first Unité d'Habitation designed along his "ideal measurements" for communal living (double-height spacious apartments of similar floor plans, all with brightly-painted balconies). It also contains a nursery school and playground, roof-top swimming pool and running track, a hotel, cinema, restaurant and internal shopping avenues - hence the self-contained "radiant city" of its name. The cause of the fire has not yet been determined.


POLITICS
Much of the recent news coverage in Europe has been centered on the weather which displaced the latest Greek loan negotiations in Brussels, the continuing euro-saga, and the incessant French voter polls. There even seems to be less of the usual sniping between the French right and left, and you could almost forget that this is an election year in France. Can't say we miss it, but if we did we could always switch to CNN for the Republican pre-election debates which, to say the least, I find rather scary. Fortunately, we have just discovered the HBO series The Sopranos at the Aix public library and are getting hooked - like millions of Americans before us - to the doings of this mafia family. Somehow seems less scary than some of the political talk we are hearing.

Posted by Anne-Marie Simons at 7:59 AM