France has a new scandal on its hands, referred to as L'Affaire Cahuzac, and this one is a biggie. Earlier this month, France's Minister of the Budget, Jerôme Cahuzac, resigned following his admission−after four months of denials−that he had an undeclared bank account in Switzerland. A Budget Minister whose job it is to combat tax fraud can hardly be forgiven for evading taxes himself. So Cahuzac, who lied to the President and to Parliament, lost his job and was expelled from the Socialist Party, but that hardly calmed the waters. Public confidence in President Hollande's government took another hit, with the man in the street calling this latest scandal simply more proof that "all politicians are crooked". The opposition called for the formation of a new government, and an embattled François Hollande, his Prime Minister Jean-Marc Ayrault and Finance Minister Pierre Moscovici could do no better than express their shock and outrage at Cahuzac's "betrayal". This in turn opened a discussion about the lack of adequate vetting for high office and the need for France to take a look at the vetting process in the United States which ensures that dishonest candidates are disqualified before they take up their functions.

Despite the government's best efforts at damage control, new revelations and accusations kept the scandal going and on April10th President Hollande appeared on national television to say that he wants to eradicate all tax havens. He also presented a draft proposal for "moralizing" French public life, and announced the appointment of a Special Prosecutor for Tax Fraud and Corruption. For greater transparency, he said, French banks will now have to declare their foreign subsidiaries; all French cabinet ministers must disclose their assets (as is done in the U.S.) and members of parliament will be asked to do the same. Some parliamentarians have already revealed their assets, while others said they would await the proposed law before acting.


However well intentioned, these measures are largely symbolic considering the size of the problem. The billions of dollars lost to tax evasion and tax avoidance every year (including through legal loopholes for large multinationals) is putting a severe strain on national treasuries, which few governments can afford in this time of financial crisis.


Meanwhile, one question regarding Cahuzac's secret bank accounts remains unanswered: what did François Hollande and his ministers know and when did they know it? (Doesn't that sound familiar?).

Speaking of taxes - last September, Bernard Arnault, head of the luxury goods group LVMH and richest man in France, left France for Belgium following President Hollande's announcement that he was going to impose a 75% tax on income above 1 million euros. His departure, considered "indecent" for someone with a personal fortune estimated at 22 billion euros, earned Arnault some bad press and was condemned by political parties on the right and the left.

But in an April 10th interview with the daily Le Monde Arnault announced that he had dropped his application for Belgian citizenship. "As I have said before, I never left France for tax reasons and I continue to pay my taxes in France", he stated, adding that he went to Belgium to set up a trust that would protect the unity of his company in case of a dispute among his heirs (five children from two marriages). "To clear any ambiguity, my return is a gesture of my attachment to France and my faith in its future".

And - dare we suggest - perhaps the consequence of the fact that Belgian authorities had rejected his application for citizenship because he did not meet the three-year residency requirement?

LVMH, with headquarters in Paris, employs nearly 100,000 people worldwide, 30% of them in France. 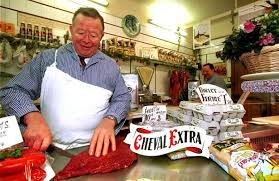 Not all scandals are bad. In the past few weeks a number of meat-labeling problems have surfaced, revealing that packaged meat labeled as beef contained in fact horsemeat or pork. "Beef" from Romania but packaged in France turned out to be horsemeat, for example, while the Swedish meat balls at IKEA labeled as pure beef consisted at least partly of pork. While watchdog agencies are looking into the scam and trying to place blame, butchers in France are quietly rejoicing. In an effort to reassure consumers, health agencies had stressed that horsemeat is a wholesome food that is lower in fat than beef. It is still being sold in France, mostly at markets and at specialized butcher shops, where business has increased between 10% and 20% since the "beef-labeling scandal". Similarly, regular butcher shops have noticed increased sales because consumers have been staying away from packaged meats. One man's loss is another man's gain. 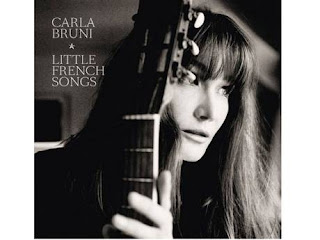 Carla Bruni, singer/songwriter and wife of former President Nicolas Sarkozy, has just released her fourth album. "Little French Songs" was favorably received and rose to the number two spot on the French charts within a week of its release. Bruni put her musical career on hold in 2008 until the end of her husband's presidency last year and her role as first lady. She writes songs in English, French and Italian and accompanies herself on the guitar. One of the Little French Songs, "Mon Raymond", is a love song to Nicolas Sarkozy, while another, "Le Penguin", is rumored to be a swipe at François Hollande's ill manners during the presidential turnover at the Elysée Palace last year. Bruni denies the rumor.

The French have difficulty pronouncing English, which can make their perfectly correct "English" hard to understand. This is largely due to the fact that they treat English words as if they were French:  stressing the last syllable, dropping aitches, etc. It can be a challenge to get their meaning, but when you do it gives you a kick. Latest case in point:  "the wooze woo". Yes, that's what it sounded like on television, the "w"s carefully formed through the nicely pursed lips of the announcer. It took some more listening to realize that we were talking about the "Who's Who".

Posted by Anne-Marie Simons at 5:26 AM