MERRY MONTH OF MAY

France has four national holidays in May: Labor Day (May 1), WW-II Victory Day (May 8), Ascension (May 9), and Pentecost Monday (May 20). It is an unproductive month, especially this year when May 8 and 9 fell in mid-week and severely hampered business the entire week when people took off the three remaining work days in order to get nine consecutive days off. "Faire le pont" ("making the bridge" from a holiday to the nearest weekend) is standard practice in France where employees have generous vacation time plus additional free days (RTT) in exchange for overtime. With a 35-hour work week, all those who work more hours get overtime paid out in the form of RTT, and it is these RTT days that are used to lengthen work breaks throughout the year.

The national statistics institute INSEE estimates the cost of the reduced production in May 2013 at 0.1% of GNP or 2 billion euros, which raised the question: should we drop a holiday in May? In this time of economic crisis and budget deficits that may seem a good idea, but neither the government nor the main unions seem to be in favor. Union leaders defend the "important work-life balance that is essential for family life" and should outweigh economic gain. Labor Minister Michel Sapin says: "Take back a holiday in May? Let's be reasonable. These days off will allow people to work even harder afterwards." This same minister also turned down the request of certain businesses to stay open on Sunday, such as home improvement, furniture stores and garden centers/nurseries. As he explained on a popular radio program: "This would mean that bit by bit the Sunday rest of French employees would be sacrificed. I will not allow it."

Sapin is clearly taking his clue from President Hollande who, in looking for ways to cut the deficit, has so far carefully avoided the subject of leisure time. It is a complicated issue and not worth a fight at a time when he needs backing on more pressing issues (retirement, school reform). Besides, the same INSEE study indicates that the loss of productivity in May is partly offset by an increase in revenues from the transportation and hospitality industries. A few years ago, then-president Sarkozy's call to "work more to earn more" fell on deaf ears, and today the French still choose time off over increased earnings.

Surprisingly, with 11 national holidays per year France is far from the leader in Europe, where Cyprus tops the list with 15 holidays a year (followed by Greece), while Holland and Great Britain close the ranks with only 8 holidays a year. Some business leaders suggest that the problem in France is not so much the number of holidays, but the concentration of them in May.

More vacation time does not seem to make the French happier, however. In a recent television interview on France 24, Professor Claudia Senik of the Paris School of Economics called the French the most pessimistic people in the world. In a study she presented at the Royal Economic Society in London last month she claims that the French are unhappier than other nationalities. "I think the French school system is partly to blame", she says. "With its grading system on a scale of 0 to 10 it is very difficult to get high grades, so students quickly get a negative view of themselves. It is well known that American children have a much more positive view of themselves, where school is geared to build self confidence". Senik thinks French schools are too strict and need changing. She also claims that, regardless of favorable external circumstances (generous social benefits, long vacations, early retirement, etc.) the French have an innate mentality or culture that predisposes them to being negative.

"In life you always compare your position in reference to some benchmark, and in France that is the grandeur of the old francophone empire and the influence France used to have in the world. That is gone for good and people have a hard time accepting the decline but they don't really appreciate the new world either. They dislike market-based globalization, and they should learn more foreign languages if they want to fit into this globalized new world. If they learned to speak English and got a closer look at the rest of the world, they would be happier", she concludes. 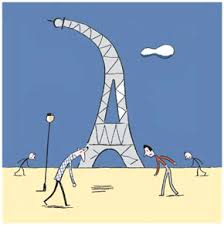 My take? The French are habitual complainers, quick to take to the streets to demonstrate against one thing or another, and with a deep-seated fear of change. Their children grow up seeing and hearing this constant griping in the home and in the street and are affected by it. Like their parents, they soon come to see the glass as half empty, and the wider world as a threat against French superiority. [Click here for the chapter RALEURS in my book TAKING ROOT IN PROVENCE and a closer look at the French reflex to resist change.]

This fear of change was evident again in the recent outcry against the government's proposal to allow certain courses at French universities to be taught in English, a subject that is still being hotly debated on television and in the press.

In order to attract more foreign students to France, Minister of Higher Education and Research Geneviève Fioraso, introduced a Bill in the General Assembly whose Article 2 would allow more subjects to be taught in English at French universities. The bill was finally adopted by the Parliament on May 23rd, following a long and stormy debate and only after an Amendment was added that required foreign students to pass a French test at the end of their studies before receiving their diplomas. Objections ranged from "It is an attack on the French language" to "Dangerous encroachment of Anglo-Saxon influence on our society" and "It will mean the slow death of the French language". One outraged Socialist deputy even called it "la pire des humiliations pour les francophones".


It is generally acknowledged that today international business is conducted in English, and that compared to other nationalities the French have a poor command of English and therefore do less well in finding jobs abroad. Yet, they see the advent of English in their universities as a displacement of French rather than an opening of doors to a wider world and its opportunities. Even French intellectual and former presidential advisor Jacques Attali as well as bookish journalist Bernard Pivot argued against the introduction of English, and the Académie Française thinks it would undermine the position of French in higher education.

Minister Fioraso responded that only one percent of all courses would be taught in English, mostly in science and business, and that research labs have been working in English for years. Moreover, a second language has never killed a first one. "We need to adapt to the real world. Chinese, Indian and South Korean students flock to British and American universities, rather than come to French ones, because of the language. Courses taught in English would increase the number of foreign students here, who in turn would absorb the French language and culture and spread it in their home countries."

The French press varied widely in its opinion on the subject, with the extreme right and extreme left violently opposed to English and others being more nuanced in their positions, but one thing they shared was passion. Hardly ever has a subject roused such impassioned debate as the venerated French language. It was not a political issue (even among the Socialist majority 40 deputies voted against), nor one of age (young and old similarly divided), but one of a shared, inculcated passion for a precious possession: the French language.

French daily Le Monde, in tones less strident than its colleagues, defended the bill, stressing that the language of international exchange is English and that there are no borders to information and knowledge. Catholic newspaper La Croix was against, prominently quoting deputy Benoist Apparu: "A people that speaks more and more of a foreign language looses its identity bit by bit". And, of course, several teachers' unions have called for a strike before the final vote.

Curiously, no mention anywhere of the heavy infiltration of English words into the French language with results like relooker, benchmarker, booker, fooding, footing, manger avec feeling and worse, or words like cool, pressing, and people that take on surprising new meaning in France. All French universities offer Master's degrees (formerly Maîtrise), and courses in Engineering or in Management (formerly Gestion), while a course on Knowledge Management is listed as "Management des Connaissances". Where was the Académie Française when all this was happening?

On May 16th, President Hollande held a press conference in the Elysée Palace attended by 400 French and foreign journalists. It lasted two and a half hours but contained little if anything new. Aware of his low approval rating and of being called "indecisive" he took a more forceful tone than during his first press conference six months ago, and repeatedly spoke of his "offensive" to bring Europe out of its lethargy and of his support for a single European economic government under one "true" president. Somewhat self-congratulatory in his evaluation of his first year in office, Hollande refused to be pinned down by aggressive journalists, showed good humor throughout the exchange, but offered no new ideas or concrete measures, maintaining his earlier positions and claiming that time will prove him right. In the face of France's current recession and increasing unemployment, the message received was long on déjà vu and short on hope.

"I once took a speed-reading course and read War and Peace in 30 minutes. It is about Russia." (Woody Allen)

Posted by Anne-Marie Simons at 9:04 AM