As I drove north through Lorraine on my way to Holland recently, I just missed the famous international hot-air balloon festival that takes place here every two years. For ten days in late July/early August some 1200 balloonists from 40 different countries meet at the old NATO base in Chambley near Metz for the Festival Mondial Lorraine Ballons, the largest hot-air balloon gathering in the world. Despite unfavorable winds on certain days, several records were broken this year:  the largest mass take-off ever (408 balloons, a new world record) and a few days later the longest single line-up of balloons (391). The festival drew 350,000 spectators. 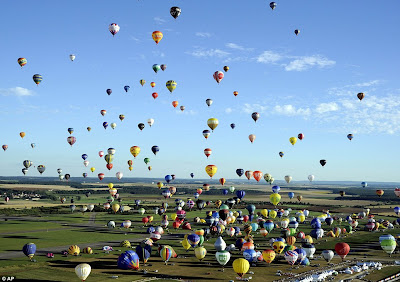 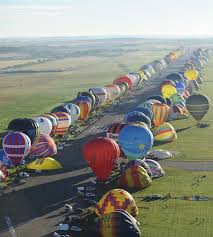 Ballooning is very popular in France where it was invented by brothers Joseph and Jacques-Etienne Montgolfier in 1783. Sons of a paper mill owner in Annonay, they had been experimenting with paper bags that would rise when a flame was held near the opening at the bottom. Their first hot-air balloon, called a montgolfière, was a large paper-lined sack of light-weight taffeta cloth, coated on the inside with alum which has fire-resistant properties. In September 1783 a montgolfière with a sheep, a rooster and a duck flew for eight minutes in front of King Louis XVI, Marie-Antoinette and the court at Versailles. For this experiment, Louis XVI had at first proposed carrying two criminals aloft, but the three animals with their different physiological characteristics were thought to be more scientifically revealing. Soon thereafter, Jacques-Etienne Montgolfier took the first manned flight in a tethered balloon, ascending to 80 feet, which was the length of the tether. The first free flight took place in November 1783 when two army officers ascended to 3000 feet and flew for 25 minutes above Paris, covering a distance of nine kilometers before landing safely. Louis XVI was so impressed that he elevated Montgolfier père to the nobility, conferring the nobiliary particle de Montgolfier on him and his descendants.

September means Rentrée in France, when children return to school and people go back to work, including the government. Here, the summer holidays are long; schools close for two months and most people take a one-month break from work. But this year, President Hollande decided that there was too much work to be done and ordered his ministers to limit their holiday time to two weeks and to stay in France. They do have their work cut out for them:
For the 27th month in a row, unemployment increased in July (+0.2%) and at 10.4% remains very high.  The economy remains stagnant, and the long overdue Retirement Reform that Prime Minister Jean-Marc Ayrault revealed on August 28th is facing stiff opposition from the right as well as from most of the major unions. This red-hot issue will be discussed by the Counsel of Ministers on September 18th, the bill will then be submitted to Parliament in early October and should be voted on in November. Even though the current system is too expensive and unsustainable, Ayrault has already announced that he will not change the legal retirement age (currently at 60, then at 62 as of 2017).  A suivre...

Another reform that is attracting attention is the Réforme Pénale proposed by Minister of Justice Christiane Taubira. French prisons are overcrowded and recidivism is high. Rather than build more prisons, Minister Taubira proposes to introduce Probation and do away with the existing minimum sentences for crimes punishable by five years or less of incarceration. In counterpart, prisoners will no longer be released automatically once they have served three-quarters of their sentence, but each case will be reviewed and decided individually. And finally, Taubira calls for a reinsertion plan to gradually prepare prisoners for release, starting at least six months before their release date.

As soon as Mrs. Taubira announced her Réforme Pénale in mid-August, Interior Minister Manuel Valls attacked the proposed elimination of minimum sentences and an open tiff between the two ministers resulted. The very public dispute was finally settled by President Hollande himself when he arbitrated the issue on August 30th in favor of Mrs. Taubira.

As if he did not have enough troubles at home, President Hollande was put in an awkward position when British Prime Minister David Cameron failed to get support for Great Britain's participation in a limited allied attack on Syria in response to Syria's use of chemical weapons, and President Obama announced shortly thereafter that he would wait for Congressional approval for this attack. France had been quick to condemn Syria on moral grounds and wants the regime punished for crossing the red line of chemical weapons use. As president, Hollande is not constitutionally required to obtain parliamentary approval before committing French forces to this mission which he sees not as a war but as a sanction. He told Le Monde: "We are ready and we will decide our position in close liaison with our allies". While he is in limbo, a first poll showed that 64% of French voters oppose a French military response to Syria.

La Rentrée is also the time when French publishers announce their new titles:  555 this year, down from 642 last year but with one difference:  this time, nearly all new books have an e-book edition as well. The French are decidedly more hesitant than Americans to embrace this new technology, and even though the offer is steadily increasing, e-books amount to only 3% of book sales here compared to 22% in the US. As the literary buzz gets louder, publishers do what they can to keep "their" authors among the names quoted as potential winners of one of the numerous French literary prizes to be awarded in October and early November, such as the Prix Goncourt, Renaudot, Fémina, Médicis, Interallié, to name just a few. Usually, these prizes carry little money, but the commercial benefits to authors and publishers can be important.

On Wednesday 4 September German President Joachim Gauck, together with François Hollande, visited the ghost village of Oradour-sur-Glane in central France where German SS troops rounded up and killed the entire population on June 10, 1944. In all, 642 people were shot and burned alive, among them 247 children. After the war, General de Gaulle decided that Oradour should not be rebuilt but preserved as testimony of the worst Nazi massacre of civilians on French soil.


No German leader has ever visited Oradour, and "even ten years ago, the memories were still too painful and it would be unthinkable" said Raymond Frugier, mayor of the new village built just one kilometer down the road. But Joachim Gauck, a former East German civil rights activist, seems committed to remembrance and has already visited two such sites:  the Check village of Lidice in 2012 and the Italian village of Sant'Anna di Stazzema in March of this year. The symbolic visit to Oradour is "a key moment in our national history" says Frugier, on a par with the 1984 visit of then-president François Mitterand and former German chancellor Helmut Kohl to Verdun where they joined hands in remembrance of the 700,000 soldiers killed in 1916.

Gauck's French visit was not purely symbolic, however. During his press conference and State dinner with President Hollande at the Elysée Palace the day before his Oradour visit, Gauck did not miss the opportunity to remind Hollande that "I am among those people who are pleased when concrete steps toward consolidation and reform are taken in France".
As things stand today, Hollande's tentative steps under difficult circumstances may take a while to lead to concrete results. 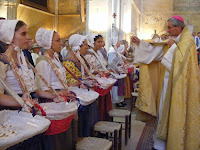 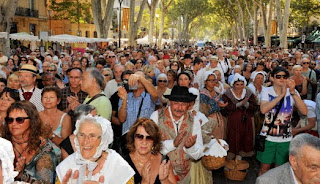 Closer to home, on this first Sunday of September Aix-en-Provence celebrated its annual Bénédiction du Calisson at the church of St. John of Malta. The calisson is a lozenge-shaped almond-paste candy that dates from 1629 when the city of Aix was threatened by the plague and people urgently prayed to their patron saint, the Virgin of the Seds, to save them. The Virgin heard their prayers and during a high Mass of thanks, as bread was not available, a soft almond-based sweet was handed out from the chalice (calisse) and became known as the Calisson, pride of local pastry makers and exclusive to Aix-en-Provence. This year, in fact, those pastry makers joined together in an effort to obtain an IGP label (Identité Géographique Protégée) that would protect them against copies -- similar to an AOC for wines. "We don't want what happened to the savon de Marseille -- mass production and loss of quality -- to happen to the calisson" said Jean-Christophe Grossi of the mayor's office. 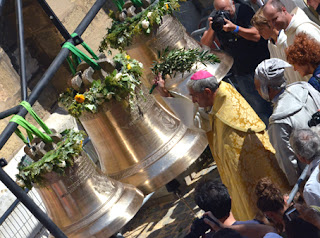 This Bénédiction is a festive occasion with folkloric dancers and tambourine players in provençal costume that attracts big crowds. But this year they received more than blessed calissons at the church of St. John of Malta; they got three blessed church bells as well. These bells replace those that general Napoleon Bonaparte "borrowed" from the bell tower in 1793 to melt into cannons for his siege of Toulon and promised to return, a promise soon forgotten once he became emperor. The mayor of Toulon recently managed to find enough bronze in his local arsenal to have three new bells made that were baptized this day Jeanne "la Calisonne", Gérard and Augustine, before they will be hoisted into place in early 2014. The one remaining bell in the tower pealed in happy anticipation.

(*)  Read more about Calissons and other traditional foods in my book Taking Root in Provence by clicking here:
Posted by Anne-Marie Simons at 1:03 AM