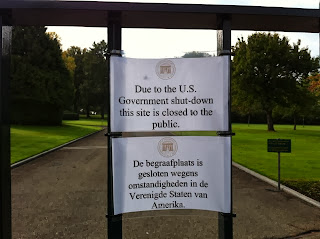 I just returned from a brief trip to Holland where I found an unexpected connection to the current shut-down of the American government. As I was driving along the road between Maastricht and Aachen, I noticed that the Netherlands American Cemetery in Margraten was closed and that a note was posted on the gate. It read: "Due to the U.S. Government shut-down this site is closed to the public".

More than 8000 American WW II soldiers are buried at this cemetery which is beautifully maintained by the American Battle Monuments Commission but also much loved by the local population, many of whom have adopted a grave. It struck me as an outrage to see this site of remembrance and quiet contemplation locked up and abandoned because there is no money to keep it open due to the squabbling in Washington.
Shame on the breathtaking irresponsibility of those who forced this shut-down, which I hope voters will remember during the next election.

There is a heated debate going on in France over the right to work on Sundays. In a country with high unemployment and an economy under pressure, one might think that those who want to work on Sundays should be allowed to do so. But this is France, the country of the 35-hour workweek and long vacations, where the Workless Sunday law of 1906 still applies even though certain exceptions have been granted over time. Aside from obvious areas such as health workers, agriculture, museums, the hospitality industry, and mom-and-pop shops without employees, the list of officially granted dispensations has grown over time and is today so confusing as to be a source of constant dispute. 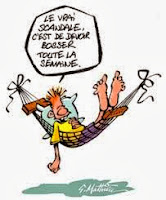 France is a lay country where the Christian Sunday as "Day of the Lord" has long since been replaced with "day for rest and family", protected by law in one form or another as early as 1700. This protection waned during the industrial revolution with its abuse of workers, and via adjustments and reinforcements finally led to the 1906 law that is still in place. Under those rules, all employees have a right to one day of rest per week, usually granted on Sunday. However, ever since women have entered the workforce and domestic life has changed, many people are in favor of shopping on Sunday and have petitioned the government to relax the rules. On the condition that no employee may be forced to work on Sunday, several large chain stores have received permission to open (home furnishings, gardening) but only in certain areas, and certain smaller shops were allowed open Sundays in areas of high tourist traffic. Several large home improvement stores (Bricorama, Leroy Merlin) immediately claimed the same right and opened on Sundays, but they were turned down and fined €120,000 per day per shop for breaking the law. They collectively appealed these fines, their employees signed a petition, and the matter will now be discussed in Parliament in November. 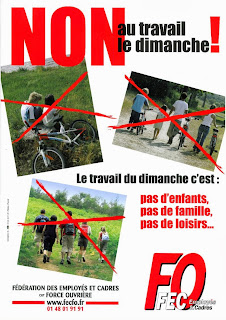 The older population remains divided on the issue, but the younger generation and especially students who can only work on weekends ask to work on Sundays. A recent IFOP poll indicated that 69% of the French feel that those stores that want to open on Sunday should be allowed to do so.

All eyes are now on President François Hollande who will have to wade through the murky rules-and-exceptions governing this issue and make the final call.

Tomorrow I'll be leaving France for one month in the United States. I look forward to seeing you again on Provence Today around mid-November.

Posted by Anne-Marie Simons at 9:18 AM