DEATH ON THE COURS MIRABEAU

No, this is not the title of a local whodunit but the sad sight of dying plane trees (sycamores to Americans) in ever greater numbers on the beautiful Cours Mirabeau, pride of Aix-en-Provence, where locals and tourists alike love to linger on the many terraces, shaded by the double rows of plane trees against the summer sun. The platane, emblematic of southern France, suffers from the deadly chancre coloré, a purplish micro organism (ceratocystis platani) that infects the tree and slowly chokes it. There is no cure.

Last month two large healthy-looking trees in the city center fell during a mild storm, miraculously causing no harm. The mayor immediately ordered all planes in the touristy historic center to be tested, resulting in the condemnation of a dozen trees. Over the next four years all 2000 plane trees of the City of Aix-en-Provence will be checked, and it is expected that a number of them will have to be felled for safety reasons.

In the past few years, some 40 planes have already been taken down and replaced by saplings of a more resistant species. Sadly, the famous green-tunneled Cours Mirabeau is full of gaps today which will take years to be filled with new greenery.

And it's all the fault of the Americans! Yes, once again, the French who are quick to criticize the Americans and just as quick to copy them, put the blame on the U.S.  It appears that in 1944 the U.S. army shipped its weapons in wooden crates that carried the parasite which brought the disease to these shores. A final bit of collateral World War II damage that is slowly eating its way through our plane tree population.

It is no secret that ex-president Nicolas Sarkozy has ambitions to make a political comeback and be a candidate for the next presidential elections in 2017. Polls show that if he ran against unpopular socialist president Hollande today, he would win. And this despite his involvement in several legal proceedings, including the Bettencourt case where he is suspected of having fraudulently obtained campaign funds from the mentally frail Mrs. Liliane Bettencourt, elderly billionaire heiress of the L'Oréal cosmetics empire. It had been expected that Sarkozy would announce his candidacy soon after the municipal elections later this month, where the socialist mayors may suffer the consequences of President Hollande's failed economic policies and his poor standing in the polls. 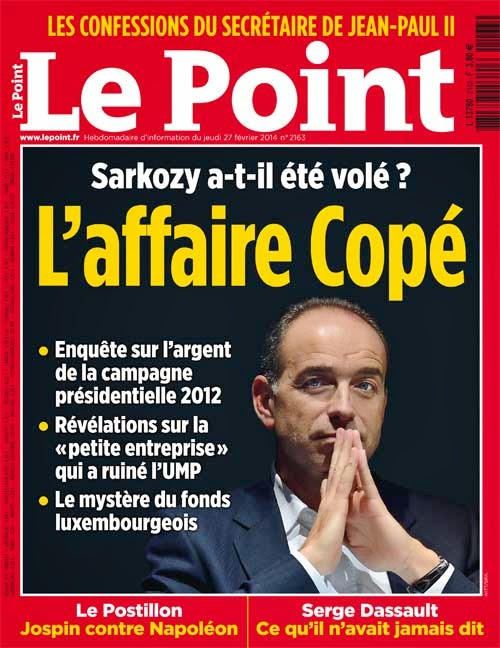 But then came a flurry of bad news for the right. First, the conservative magazine Le Point accused François Copé, leader of the center-right UMP party, of having used the 2012 campaign to steer without due bidding process at least €8 million to a PR company founded by two of his close friends

Next, on March 3rd the daily Le Monde announced that two Parisian judges investigating the claim that Libya's then-ruler Muammar Gaddafi had helped finance Nicolas Sarkozy's 2007 presidential campaign had decided to tap the phones of Sarkozy and his former Interior Minister Brice Hortefeux in an attempt to collect evidence. In December 2013 the judges overheard several conversations between Hortefeux and Christian Flaesch, head of police investigations in Paris, showing a suspicious closeness between the police and Mr. Hortefeux. Fragments of these phone conversations found their way into Le Monde and Mr. Flaesch was fired.

Later, Sarkozy and his lawyer Thierry Herzog were overheard discussing the progress of the Bettencourt case. The investigating judges soon found that certain facts known to Sarkozy and his lawyer had been leaked to them by Gilbert Azibert, a public prosecutor at the Court of Appeals with access to the intranet service of the highest courts. Mr. Azibert, as it turned out, was keeping Sarkozy's lawyer discreetly informed about the judges' leanings in the Bettencourt case in exchange for a promise of help by Sarkozy in trying to obtain a juicy posting in Monaco.

Never before has the Justice Department eavesdropped on a former president and whichever way the case unravels, this time Sarkozy's chances of being re-elected seem severely compromised.

Of course, the timing of these revelations, just two weeks before the municipal elections, can hardly be accidental and soon the UMP party began accusing the socialists of using dirty tricks to keep the right from winning.

Then, in the uproar over the wiretapping, Justice Minister Christiane Taubira gave the UMP a chance to even the score when she said in an interview that she had learned about the wiretap in the press. This was immediately contradicted by Prime Minister Jean-Marc Ayrault who confirmed that he and his Justice Minister had learned of it several weeks earlier but did not know the contents of the wiretaps. When Taubira then said she had made a mistake in the dates but had not lied, the UMP party called for her resignation and the tables were turned again in favor of the right.
As the cacophony grew it laid bare once again the internal tiffs and poor communication of the Hollande government.

For nearly a week in March the level of fine-particle air pollution exceeded the established safety levels in Paris and a large number of French départements. A number of conditions (warm days-cold nights, many diesel-driven vehicles, no wind) came together to trap the polluted air and cause a health hazard for the very young and the old. In response, the government offered free public transportation in the affected areas and imposed reduced speed limits, but it took four days before the prime minister decided to apply the alternate-day driving rule for even and odd-numbered cars.

This does not go far enough, according to experts who argue that rather than reacting to these occasional peaks of pollution the government should prevent them by levying a city congestion fee on cars such as London, Stockholm and Milan have already done, supporting the development of alternative means of transportation, and taxing the heavy trucks and encouraging commercial rail transport as the Ecotax, which the Hollande government has just postponed until 2015, would have done. This Ecotax already exists in Finland, Great Britain, Scandinavia, Germany, Belgium, The Netherlands and Austria, with proven effect.

France was expected to begin applying the Ecotax on January 1, 2014 and had already installed the sophisticated computerized road equipment, built like a metal arch across the road (called portiques in France), that would calculate the tax based on the weight of every vehicle over 3.5 tons equipped with an obligatory on-board device that allows it to be identified, tracked and weighed. But in November the Bonnets Rouges, a group of angry truck owners and agricultural workers in Brittany rebelled against the tax, blocked roads and began to tear down the costly Ecotax portiques (blog 11/17/13). Within weeks the government gave in and postponed the measure until 2015, despite the fact that the tax is based on the "polluter pays" principle and would have produced revenues of €1.2 billion/year destined to pay for new or extended tram lines in a number of cities, improving infrastructures for train and river transport, and serve as an enticement to seek less polluting means of transportation.

Canceling the Ecotax was not only detrimental to the environment but very costly to the State which has signed a 13-year management contract with the private Italian company Ecomouv that built and installed the portiques and for €220 million per year (€18 million per month) will collect the tax, administer the system and maintain the equipment. The French government is now contractually obliged to pay Ecomouv €18 million per month whether any tax is collected or not.

Mr. Hollande's weakness in the face of opposition benefitted a very few and caused unnecessary environmental and economic harm to the very many. It also won him only a few months before he will be forced, in accordance with European Union agreements, to apply the Ecotax in 2015.

But let's not leave on this gloomy note and remember the positive:  For over a month now, President Hollande has not been seen on a motorcycle at night and no new amorous conquests have been reported. I will miss the cartoons. 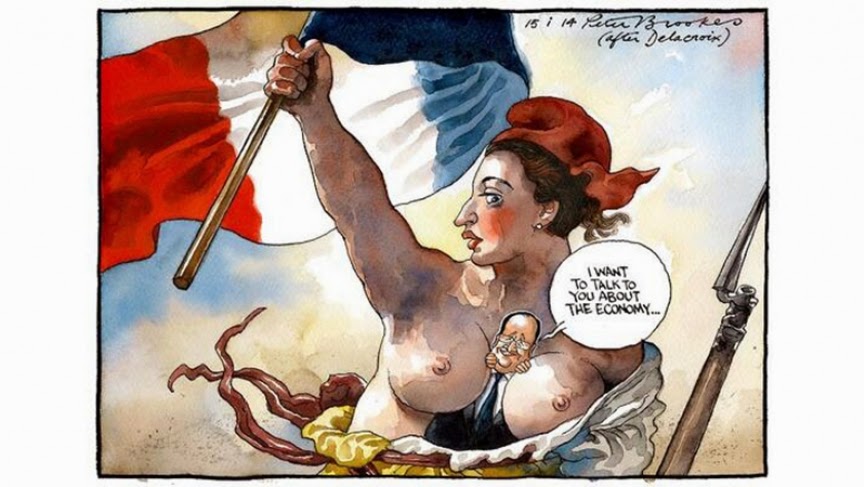 Posted by Anne-Marie Simons at 1:39 AM