The hectic month of July is behind us:  operas, concerts, conferences and master classes in Aix were followed by four wonderful plays in Avignon and a sigh of relief that in the end the social conflict of the Intermittents did relatively little damage to these two main summer festivals. The source of the conflict, however, remains unresolved for now and will have to be addressed before year-end if the 2015 festival season is to be saved.  We cross our fingers. 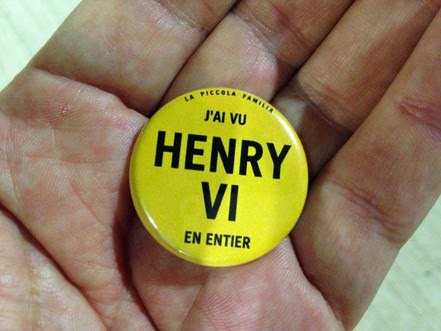 The highlight of the 2014 Avignon season was probably the 18-hour-long performance of Shakespeare's Henry VI that drew a sell-out crowd from 10AM to almost 6AM the next day. For every one of its three shows! With five interruptions of one hour each, the exhausted but euphoric actors finished their marathon performance to a long standing ovation of an admiring public most of whom had stayed until the end. "Better than Game of Thrones" said one young spectator.

The newly nominated Festival Director, author-actor-director Olivier Py, summed up his first season this way: "It was a stressful time but it was beautiful". It was also costly, since the twelve performances cancelled due to strikes cost the Festival €300,000 in lost ticket sales, something that did not unduly worry the Avignon regulars who generally support the intermittents and vowed to be back next year, come what may.

Similarly, Bernard Foccroule, Director of the Opera Festival in Aix-en-Provence, declared himself satisfied with the 2014 season that despite a difficult start and two canceled performances managed to bring the Festival back into the black after a dip into the red last year. With ticket sales of close to 95 percent this year, things look good for next year when some BIG names are on the program, such as Sir Simon Rattle, Peter Sellars, the talented Katie Mitchell and others. 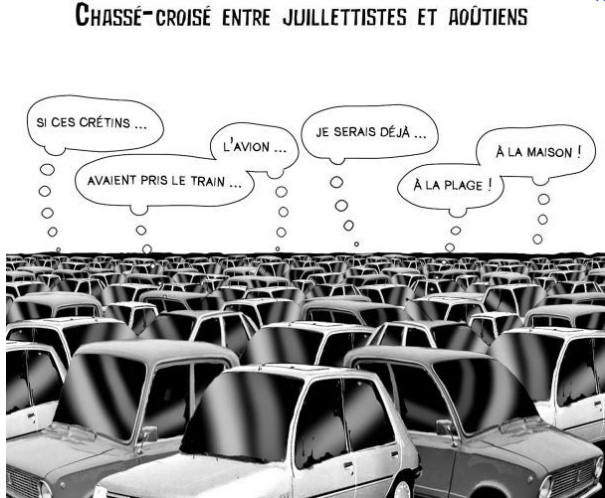 Meanwhile, the first big chassé-croisé of the summer, when juillettistes and aoûtiens (July and August vacationers) cross each other coming and going on the north-south highways of France, broke all records on "black" Saturday, August 2nd, with hundreds of miles of traffic backups on all major north-south roads and blistering waits of up to one hour and a half at toll stations. It's a familiar sight on this biggest annual holiday weekend, yet nobody seems willing to forego one day of a holiday rental. Similar difficulties are to be expected every Saturday of August in the southward direction, with another "black" peak on Saturday 16 August in both north and south directions. Don't say I didn't warn you.

A surprisingly optimistic President Hollande in his July 14th television interview was followed last week by a rather pessimistic Prime Minister Manuel Valls who − before the 2-week summer break of government ministers − announced that the post-holiday return (la Rentrée) will be a difficult one in economic terms. For the eighth month in a row unemployment figures rose in June, and the effects of
the Pacte de Responsabilité (blog January 5, 2014) between the government and French business leaders have yet to be seen. Nevertheless, this Pacte is the right government response to youth unemployment, according to Valls, who further warned of a risk of deflation before things will change for the better. Reforms, reforms, reforms - that is what we need and what we are working on, he said, as he asked for people to be patient. "We are working hard and we will succeed".

As members of the Cabinet each went their way on a 2-week holiday "in France and within several hours from Paris so as to be available", François Hollande is taking his own summer break at La Lanterne, the presidential retreat in Versailles, where he intends to celebrate his 60th birthday on August 12th with his children.

This month marks the one hundredth anniversary of the start of the First World War, called la Grande Guerre in France, which killed 18 million people. On August 3rd, for the first time ever, French President Hollande and German President Joachim Gauck met at the large WW-I cemetery in Hartmannswillerkopf, Alsace, where they honored the 30,000 French and German soldiers buried there. They signed a joint declaration and laid the first stone of a Franco-German memorial building to be opened in 2017. "The terrible battles fought here make of Hartmannswillerkopf a sacred site in memory of the sacrifice of those fallen here, and the new museum will stand as an emblem of Franco-German friendship and a symbol of its reconciliation", read the Declaration signed by both leaders. The meeting was sealed with a long embrace between the two men.


(Am I the only one to think that this looked a bit forced? The Germans, like the Dutch, are not huggers and both men seemed to be following a script for the journalists and photographers).

During this government recess and with most of the French on vacation, the month of August tends to be quiet, not to say somnolent. In fact, I feel a bit somnolent myself and will sign off here with a promise to report back to you as soon as everyone starts stirring again.

As I climb into my hammock, is that a distant plane I am hearing?  Or a buzzing fly?  Or my buzzing cell phone?  Or....  ZZZZZZZZZZZZzzzzz.