The MANIF POUR TOUS of October 5th in Paris and Bordeaux picked up where last year's Manif Pour Tous left off (see blog 6/23/13). In May 2013, following massive demonstrations for and against gay marriage (Mariage Pour Tous), the Parliament passed the Taubira Law allowing same-sex marriage but deferred a decision on gay adoption. So when the pro-traditional-family forces of conservative Catholics marched again this month it was to express their strong opposition to the Taubira Law and to demand a law against surrogate motherhood. Prime Minister Valls obliged by stating that surrogate motherhood is already illegal in France ("It's a form of female slavery. Surrogacy is the selling of human life, and it will not be accepted here") and that French parents who avail themselves of surrogate mothers abroad cannot count on automatic French citizenship for those babies. Remains a final vote on gay adoption and probably another protest march. 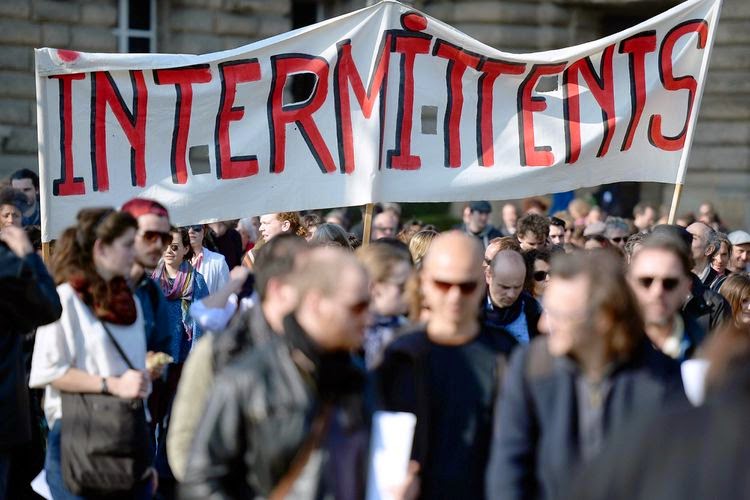 The INTERMITTENTS DU SPECTACLE, those theatre temps who managed to disrupt several festivals and close down a number of opera and theater performances in Aix and Avignon this summer (blog 7/21/14), have returned to the streets. To calm the waters and prevent an all-out strike, such as the one in 2003 that closed down all summer festivals, Prime Minister Valls promised the temps in July that the government would settle the recurring issue of their unemployment pay once and for all before the end of this year. On October 1st, the temps called a one-day strike and marched in Paris to demand a specific date for this negotiation. A "warning shot" strike, you might say. 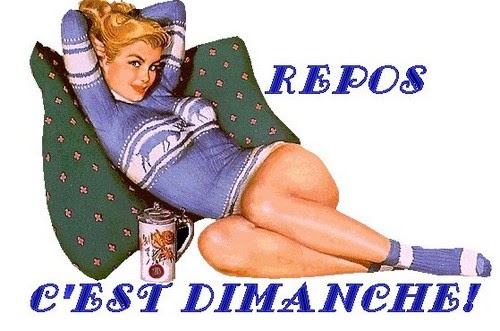 WORK ON SUNDAYS.  The sensitive issue of Sunday work is back on the table, something that no government has managed to resolve so far. Over time, the applicable rules and their exceptions have become so opaque and complex that a thorough review and simplification was recommended in the Bailly report of last winter (blog 10/13/13). To speed up the process, Prime Minister Valls proposed this summer that this issue be decided by order instead of by parliamentary vote. It wasn't long, however, before he had to give in to pressure from his majority and accept the slower and more hazardous route of Parliament.

Even though France is under a lot of pressure from "Brussels" to implement the necessary structural reforms to reduce its deficit, "speeding up the process" is simply not a French concept.

ECONOMICS.  Another young man in a hurry is our new Economy Minister, 37-year old Emmanuel Macron who in the October 12 Journal du Dimanche pleads for a €300 billion "New Deal" for Europe (modeled after the American New Deal of the 1930s) to boost investment and growth. "Such an EU-financed New Deal would allow France to obtain €10 billion of supplementary investment funding each year and make everyone a winner whereas today everyone is a loser", he says. Experts like Joseph Stieglitz agree that austerity measures without investment do not work and in fact impede growth. "We cannot simply blame Brussels or Berlin for our problems", says Macron. "We need to show that we can move and modernize this country, unblock and free up the economy, provide opportunities to those who want to work, and make working, creating and producing simpler. We have six months to turn things around in France".

First obstacle on this fast course: the strong objections voiced by Jean-Christophe Cambadélis, leader of the Socialist Party, to any reduction of the amount and the duration of unemployment insurance, one of the reforms that President Hollande has avoided addressing so far. Even though Manuel Valls on his recent visits to Berlin and London spoke of a business-friendly France that is ready to make the necessary reforms, President Hollande sidestepped the issue and commented that there is enough on his agenda right now and unemployment insurance is not one of the items. This government is still not speaking with one voice, which does not augur well for speedy solutions.

The ECOTAX on heavy trucks that was initiated by Nicolas Sarkozy for implementation on January 1, 2014, then repeatedly postponed by President Hollande, and considerably weakened by his newly nominated Minister of Ecology Ségolène Royal last June (blog 6/30/14), was finally cancelled altogether. The coup de grâce came when Royal announced on October 9th that she had suspended this tax sine die. To make up for the financial loss of €550 million/year she plans to make the privatized highway companies pay "out of their excessive profits". Finance Minister Michel Sapin fears that these concessionary companies have ironclad long-term contracts that would be difficult to change and would take a long time to renegotiate. In the meantime, the loss of Ecotax revenues is real and the Italian Ecotax collection company Ecomouv will have to be paid €1.8 million per month in indemnity.

This Ecotax - a "polluter pays" contribution to the maintenance of public roads - had received unanimous approval in Parliament and is already successfully applied in seven European countries. It is baffling that the Minister of ECOLOGY could cancel this tax, ignoring its public health aspects, and showing a total disregard for the greater good of clean air and a better environment for all. And all it took was the threat of the federation of French truckers to block the highways on October 13th. It didn't even have to come to that; four days before the deadline Royal sold out.
An appalling lack of courage and political will - altogether too common, alas. 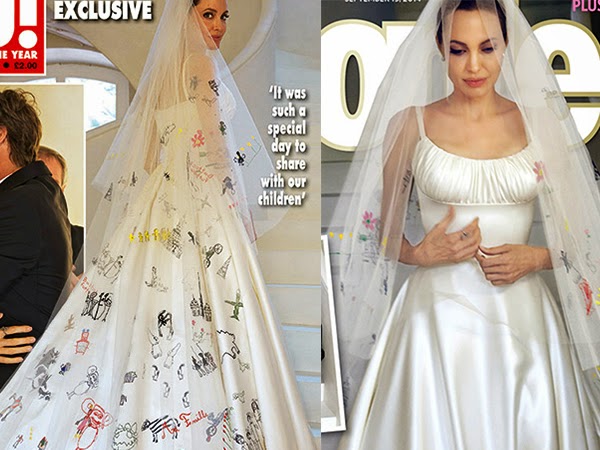 Let's get away from French politics for a bit of soft news:  the oft-announced marriage of Brad Pitt and Angelina Jolie finally took place on August 28th when they tied the knot, surrounded by their six children, at Chateau Miraval, their wine-producing property in the south of France. The very traditional bride wore white satin but with a personal touch: her long veil was embroidered with drawings made by her children. It was a small wedding by Hollywood standards, and photographers were banned from the event except for People and Vogue magazines who had bought the rights to exclusive photographs, with the proceeds of this deal (at last count some $2 million) to go to charity. 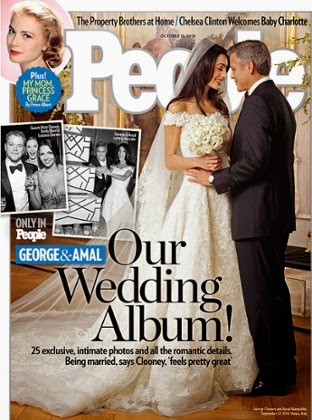 A month later, long-time-most-eligible-bachelor George Clooney married Lebanese-born British human-rights lawyer Amal Alamuddin in the romantic setting of Venice. Oscar-winning actor and producer Clooney is also known for his humanitarian work on the Darfur crisis in Sudan. Like the Jolie-Pitts, George Clooney sold the rights to his wedding pictures to several magazines - People, Hello, and Vanity Fair - for the benefit of different charities. The bulk is to go to the Satelite Sentinel Project (SSP), founded by Clooney and John Prendergast in 2010 as an early-warning system to deter mass atrocities and focus world attention on rapid responses to human rights violations.

Having relieved herself of pent-up anger against President Hollande in her tell-all memoir Merci pour ce Moment, one would think that former First Lady Valérie Trierweiler might have moved on to other pleasures and enjoy her new status as bestseller author and brand-new millionaire. But no, the girl is still angry. On September 28th, at a party given by friends in a popular Parisian bar, she ran into friend and fellow journalist Valérie de Senneville (wife of Finance Minister Michel Sapin), who had distanced herself from Trierweiler after the publication of her book. In a heated exchange Trierweiler accused de Senneville of treachery and before stunned bystanders then pounced on her former friend, scratching her face and pulling her hair. Fellow guests pulled the women apart and managed to persuade de Senneville not to bring legal action for assault and keep things quiet. But soon France Dimanche magazine revealed the incident and headlines like "Rottweiler in Catfight" began appearing. Now that the British press has gotten hold of the story, can cartoons be far behind?

Finally some good news for France when this year's Nobel prize for literature was awarded to 69-year old French author Patrick Modiano, whose work deals mostly with the experience of Jews in Nazi-occupied collaborationist France. Modiano remains relatively unknown outside France because few of his books have been translated into English. The Nobel Committee praised his "art of memory with which he has evoked the most ungraspable human destinies".

The rather shy Mr. Modiano was modest and appealingly inarticulate in his interviews where he never finished a sentence and described his work as "writing the same book for 45 years". Clearly, his medium is the written word, not the spoken one.

This appeals to my soft spot for malapropism and inarticulateness, and inevitably brings to mind George W. Bush Jr. who has elevated these to a high art.

Who can forget these Bushisms:

Verbosity leads to unclear, inarticulate things.
I stand by all the misstatements I have made (to Sam Donaldson, 8/17/93)
If we don't succeed, we run the risk of failure.
Republicans understand the importance of bondage between a mother and child.
Illegitimacy is something we should talk about in terms of not having it.
They misunderestimated me.
For NASA, space is still a high priority.
It's time for the human race to enter the solar system.

... whereupon I wish our space cadet a happy trip and hope he will send us more of his wisdom once he gets there.