A new wind is blowing across the land and it is blowing at night. Nuit Debout (Up All Night) is a movement that started in Paris on March 31 as a protest against a pending new labor law (El Khomri) that would make hiring and firing easier for companies and potentially affect job opportunities, especially for the young. Those young walked out of high schools and universities and were soon joined by working people who would come and demonstrate after work. As they grew in numbers they began to occupy large public squares such as the Place de la République, where reporters and television cameras relayed their every claim and protest to the prime-time evening newscasts. 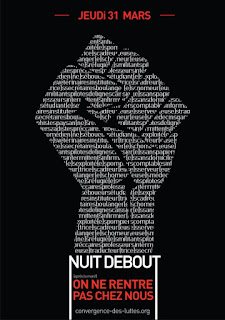 Interestingly, many of these young protesters are at least ten years away from their first job, and their anger over a proposed new labor law looks like a pre-emptive strike against a reduced job market when they finish school. Once in a while they are joined by musicians, and to some it may look like they are out having fun at night, happy to skip school for a good cause, and soon to fade away like so many protests before. But against all expectation, the movement did not run out of steam and people continue to gather nightly even after hooligans tried to disrupt the protest by throwing rocks at police, breaking windows and setting fires. So Nuit Debout continues and has now spread to other cities, although the tone is shifting from protest to gabfest where anyone present can speak up and be heard for three minutes. So far, so unthreatening.

And yet, an undercurrent is being felt that is reminiscent of the Stéphane Hessel effect of a few years ago. In late 2010 German-born and French-nationalized Stéphane Hessel, concentration camp survivor, resistance fighter, former French diplomat who helped draft the Declaration of Human Rights, and man of letters, published Indignez-Vous! (Time for Outrage!), a pamphlet-sized book that was an instant success and sold 4.5 million copies in 35 countries. I attended his conference in Aix-en-Provence in October 2010 where the then 93-year-old Hessel brought the audience to its feet with a passionate call for non-violent action against growing social and economic inequality worldwide. The key words were Resistance and Human Dignity.

Though this was no call for revolution, the seed was planted and sparked the Occupy Wall Street movement in the US and Los Indignados in Spain. Hessel died in 2015 at age 95, but his message of peaceful protest against the indignities of today's neoliberal market-driven system still resonates in the left-wing Spanish movement Podemos, a direct outgrowth of Los Indignados.  Podemos (We Can) was founded in March 2014 and today is Spain's second-biggest party, with 69 seats in Parliament. Last week its leader, political scientist Pablo Iglesias, turned down an invitation to form a coalition government with Prime Minister Rajoy's center-right People's Party. Even if Podemos does not join the coalition, its rapid growth is evidence that sustained protest may well spawn a political party with a real voice in government.

It is highly unlikely that the French Nuit Debout movement will grow into a political force, but the extreme dissatisfaction with President François Hollande (whose approval rating is down to 14 percent in the polls) is such that this cannot be excluded. Even his own camp is divided, and Economics Minister Emmanuel Macron has just announced in an interview that he is dissatisfied with today's Socialist Party. Earlier this month he founded his own movement, En Marche, and rumor has it that he may run for the presidency in 2017.

Following the defeat in Parliament of his bill to revoke French citizenship from convicted terrorists, and his current difficulties in getting the El Khomri labor law adopted, President Hollande went on national television on April 14 for a "Dialogue with Citizens". In a 2-hour interview by two journalists and four citizens, the dialogue soon turned into an exercise of self-justification and a detailed listing of his minor successes. Nothing about the high rate of unemployment which he claims to be combatting with a number of measures (derisively referred to as "mesurettes" in the press) that are clearly not working. And nothing in the way of concrete answers to the four citizens about their particular concerns (bloated paperwork, jihadism at home, rise of the right). To one and all, Hollande's response was: things are better today than when I took over. "Are you joking?" said one of the journalists. 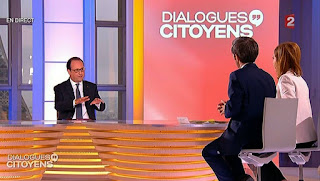 In the stuttering manner that is his style Hollande failed to reassure anyone, and the next day the newspapers pulled no punches, calling this missed opportunity his Waterloo, a catastrophe for the socialists, a gain for the extreme-right Front National, and proof that he cannot be re-elected in 2017.
If today he is widely seen as a failed president at home, he nevertheless has a strong record abroad.
He has never looked more presidential than in the aftermath of the Charlie Hebdo killings in January 2015, when he gathered dozens of foreign leaders around him in a solemn march against religious extremism. Similarly, he found the right tone in his response to the Paris attacks of last November and immediately launched French airstrikes against ISIS strongholds in Raqqa, Syria.
In 2013, he was the only European leader to support an international military strike in Syria (which had to be aborted when the US and the UK backed out), and that same year, he led a successful military intervention against Al Qaida in Mali, where he maintains a military force to secure the Sahel region.
Pity that this is not perceived as strong leadership at home, where he continues to be seen as weak and out of his depth. Fighting wars is simpler than passing reforms in France.

So where is the good news?
Try this:

−  Just this morning it was announced that French shipbuilder DCNS has won a $40 billion contract to build 12 submarines for the Australian Navy, beating bids from Germany and Japan. Australian Prime Minister Malcolm Turnbull announced the news and said that the Shortfin Barracuda subs will be built in Adelaide.

− Earlier this month the Italo-Swiss shipping company MSC Croisières ordered four large cruise ships from shipbuilder STX France in Saint Nazaire for a total cost of €4 billion. This in addition to an earlier €3 billion order by MSC for four passenger ships, i.e. a total commitment by MSC of €7 billion in two years. 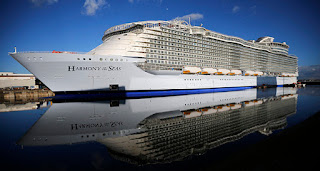 −Today STX is putting the finishing touches on the Harmony of the Seas, largest cruise ship in the world, built for Royal Caribbean Cruise Lines. It is expected to be delivered next month. With a full order book and commitments until 2025, things are going swimmingly for STX France.

− Perhaps more surprising is that France is experiencing a boom in high-tech startups. The difficult job market at home has caused a brain drain of young people to banking jobs in London and elsewhere, but others have been motivated to start their own business, especially in new technologies. 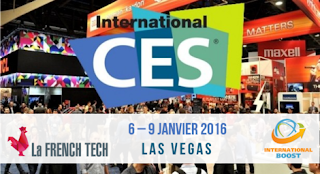 This year, the important annual Consumer Electronics Show in Las Vegas counted no less than 128 French high-tech companies, and France is today "the high-tech pioneer in Europe" according to John Chambers, CEO of Cisko, who is ready to invest €200 million in French startups. Microsoft's CEO agrees and is investing €83 million in French startups, while Facebook's Mark Zuckerberg is opening an Artificial Intelligence research lab in Paris this year. Not bad for a country with a Labor Code of 3000 pages.
Whoot-whoot for the young techies! 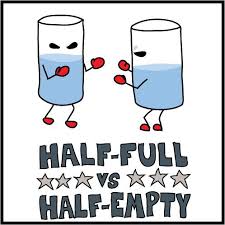 As we suffer another nationwide railworkers' strike today with shutdowns or slowdowns on most regional and high-speed networks in France causing misery for commuters, it is good to look at the bright side and find reason for optimism.
Not easy for the French, who tend to see the glass as half empty.
But even if they may find pleasure in pouting, as someone has claimed, they will surely want to raise a toast to these recent commercial successes. So here's to France and its technological know-how - with a glass of wine that is half full.