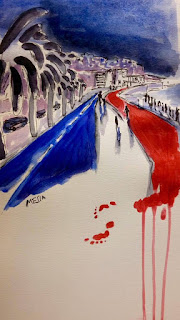 Yes, again!  For the third time in 18 months, France was cruelly hit by terrorist violence. This time it happened in Nice, following its famous Bastille Day fireworks that draws thousands of people to the beautiful beachfront Promenade des Anglais on this most festive day of the year, July 14th. As the crowds were leaving the beach that night and walking down the wide traffic-free Promenade des Anglais, a truck suddenly barreled through a flimsy road barrier and bore down on them, swerving onto the sidewalks in a deliberate attempt to mow down as many people as possible. It left 84 dead in its wake, including ten children, and 202 wounded. Today, 121 injured are still hospitalized and 26 of them remain on life support. Sixteen of the dead have yet to be identified.

The driver, in a 19-ton rented truck, managed to continue his murderous assault for more than a mile before police finally brought him to a stop and shot him dead in an exchange of gunfire. He was identified as 31-year old Mohamed Lahouaiej Bouhlel, a Tunisian national living in Nice and father of three young children. Fired by the same blind hatred as the Islamist extremists who attacked the Charlie Hebdo offices, and the Bataclan concert hall and cafe terraces in Paris last year, Bouhlel appeared at first to be an angry loner driven to mass murder for sick, personal reasons rather than out of religious fanaticism.

According to Walid Hamou, his wife's cousin, Bouhlel did not attend his neighborhood mosque, drank alcohol, ate pork, was a notorious womanizer and did not observe Ramadan. He even smoked cannabis, Hamou said. Neighbors in his apartment building reported that he had a violent nature and was living apart from his Franco-Tunisian wife whom he was said to beat. Known to police for petty crimes and violence, he was given a six-month suspended sentence in March as well as a €1000 fine for road rage and hitting a driver with a wooden pallet, but he was not listed as a security risk because he was not radicalized. His father in Tunisia confirmed the violent behavior and said that his son had also been treated for depression.

Initially, the attack was not vindicated by any terrorist organization, but 36 hours after the incident ISIS suddenly claimed that Bouhlel was one of its soldiers who had heeded its call to kill as many infidels as possible by any means available. Given the late date of this claim, police suspected opportunistic propaganda but continued to investigate any possible link Bouhlel may have had with the Islamic State. They questioned his ex-wife and four other people with links to Bouhlel, some of whom said to have noticed a recent change in Bouhlel and thought he may have been radicalized very recently. Police have since released the ex-wife but are still holding six individuals, including the man who sold Bouhlel the gun he used in the attack when he shot at the police who tried to stop him.

As soon as the news broke and shocking eyewitness footage of the attack appeared, memorials of flowers, candles and teddy bears began to spring up in all major cities, with cries of condemnation or heartbreaking messages of shared grief. This one, left in front of City Hall in Aix-en-Provence, touched me deeply: 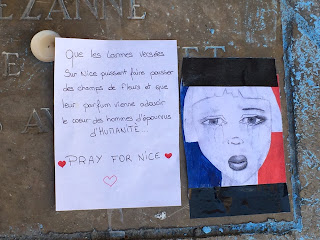 May the tears we shed over Nice
cause fields of flowers to grow
and may their perfume soften the hearts of men
who lost their humanity.


President Hollande declared three days of national mourning, to end on Monday at noon with a minute of silence. As he and Prime Minister Manuel Valls arrived for the brief ceremony on the Promenade des Anglais that day they were booed by some of the 30,000 people who had gathered for this homage to the victims, and boos and whistles rang out again as they and their entourage left. Manuel Valls called the gesture "undignified" at this sad moment of reflection, but it was an undeniable sign of the distress felt by many at the apparent inability of this government to protect its people.

While all possible motives remain open, a picture of the assailant is slowly emerging of someone who is angry, depressed, alienated and violent. Experts say that heeding a call from ISIS may incite such a person to wipe his slate clean and become "someone" by slaying infidels in the service of the Islamic State's cause. Today we know that Bouhlel reserved the refrigerated truck ten days before the attack ("to deliver ice cream"), picked it up a week later and made several trial runs with it on the Promenade. The day before the attack he sold his car and emptied his bank account, knowing he was not coming back from the path he had chosen.

Whether Bouhlel was a deranged hothead or a recent IS convert, people are looking to their government for reassurance and solutions. With the memory of last year's terrorist attacks still fresh in their minds, as well as the solace and strength found in the extraordinary show of unity after the Charlie Hebdo attack in January 2015, such unity is totally lacking this time. Politicians of the opposition were quick to blame President Hollande for security gaps and inefficiency. With an eye on the upcoming presidential elections in 2017, and before the three-day period of mourning had even begun, political opportunists fouled the air with accusations against the president of incompetence, wrongheadedness and worse. In a measured but rather ineffectual response Hollande ordered another three-to-six-month extension of the current state of emergency that was to expire on July 26th, and announced the call-up of 12000 operational reservists to shore up the police and gendarmes.

Georges Fenech, president of a parliamentary commission of inquiry into the terrorist attacks of last year, responded angrily that the commission's report had revealed a "global failure" of the government's security system and contained 39 urgent measures to be taken, including the immediate creation of a single US-style counter-terrorism agency regrouping all French intelligence services. Another key proposal was the improvement of the judicial and prison systems where many French jihadists have been radicalized in the past. Fenech criticized Hollande's extension of the state of emergency as ineffective, solving nothing and serving only to reassure.

After the brief memorial service in Nice on Monday, French Attorney General François Molins held a press conference that afternoon to announce that the ongoing investigation has found no evidence that Bouhlel was connected to ISIS or to any individual member of an islamic extremist organization, and that he was "self-radicalized" by means of ISIS propaganda sites on the internet. Analysis of his computer revealed that since the first of July he had been making almost daily searches of passages from the Koran and of jihadi islamist sites, including gruesome photos of torture and beheadings. He had consulted reports on the recent killings in Orlando and Dallas and had started growing a beard just a week ago which, according to someone who knew him, was a sign of religion.

Bernard Cazeneuve, Minister of the Interior, stressed the difficulty of foiling a "lone wolf" attack and declared that no amount of added police or increased security could have prevented the tragedy in Nice. He also reminded us that the month-long Euro football championship had finished just days ago without major incident despite a threat of terrorism, and praised the security forces for their extraordinary performance during the state of emergency of the past eight months, during which time they prevented a number of terrorist attacks. They continue to be heavily solicited during the Tour de France which will end in Paris on 24 July, and the crowded summer festivals of Avignon, Aix-en-Provence and elsewhere, none of which have been canceled except in and around Nice. 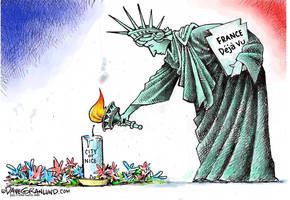 France is a prime target for terrorism given its role in the coalition that is fighting ISIS in Iraq and Syria, its continued presence in sub-Saharan Africa where its troops managed to drive Al Qaeda jihadists out of Mali in 2013, but also because of the poor integration of its North African immigrants who live mostly in suburban ghettos with high rates of unemployment and crime. This is fertile ground for islamist extremists who seek to recruit disenchanted, unemployed, youths for the IS training camps in Syria from where they return with a jihad mission to commit terrorist acts. Successive French governments have done little or nothing to promote better integration of this population, thereby weakening the cohesion of the French society and giving rise to xenophobic political parties. 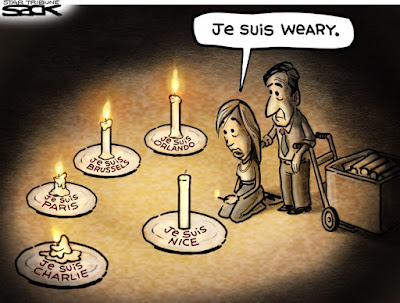 The government needs to implement reforms, which at the best of times is a difficult task. As the Nice tragedy has again demonstrated, one of the most important and urgent of such reforms is the overhaul of the complicated, multi-layered system of the French bureaucracy which leads to excessive paperwork, duplication of effort, preservation of personal territory, missed signals between different services, and unacceptable delays in times of national emergency. Poor communication between national and international intelligence services has played a role in the terrorist attacks in Belgium and France. Have the lessons of past attacks been absorbed?

Clearly, drastic action is required immediately but the hardest thing to break is an old habit. Will France be able to respond quickly and act on the recommendations of its own parliamentary findings? Continued debate on this issue seems obscene under the circumstances. Perhaps a look at the mourners' messages may move the politicians to action − if only out of shame.

A shocked and angry nation is expecting no less.