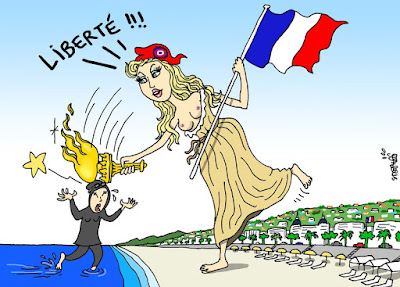 Following the recent burkini controversy in France, the Conseil d'Etat (highest administrative court) has suspended the burkini ban in the Riviera resort of Villeneuve-Loubet whose mayor had prohibited the full-body swimwear because he considered it a provocation and a threat against the public order. The administrative court found no proven risk to public order and ruled that the ban was a serious and clearly illegal violation of fundamental freedoms − a legal decision that sets precedent in all those French communities where the burkini was banned this past month, some 30 in all.

This should have put the issue to rest, but neither the mayors in question nor a number of pro-ban politicians (including prime minister Manuel Valls and presidential candidate Nicolas Sarkozy) were willing to let the matter drop at a time when politicians are testing the winds and polishing their message to fit the country's mood prior to the presidential primaries in November. A recent poll shows that 64 percent of the French people are in favor of a ban on the burkini. Sarkozy, head of the center-right opposition party Les Républicains, has already announced that, if elected, he will change the constitution to allow for a burkini ban and that he will toughen the immigration laws. He is sounding more and more like the extreme-right, anti-immigrant, Front National party of Marine Le Pen, which is expected to do well in the elections, picking up votes from a disenchanted left as well as from a fearful electorate running for cover from islamic terrorism.

The governmental overreaction to a minor burkini incident on a public beach has, once again, shone a spotlight on a peculiarly French tendency to complicate life and lose control of the issue in question. The sacrosanct French principle of secularism (laïcité) used by local authorities to ban the burkini does not apply to public beaches, and its wearers (few and far between) do not pose a recognized threat against public order. But a jittery population, traumatized by repeated islamist terrorist attacks, is easy prey for opportunistic politicians who prefer to fan these fears for their own political gain rather than to send a unifying message to its pluri-ethnic citizens, nearly 10 percent of whom are Muslim. This immigrant group, mostly from former French colonies in west and north Africa, lives largely in the urban ghettos called cités, where petty crime and high unemployment are endemic and where the unemployed young are tempted into islamic radicalization. Efforts to improve the integration of this population into the French mainstream have been timid at best, and today's unnecessary burkini fight only drives a further wedge between "them and us". 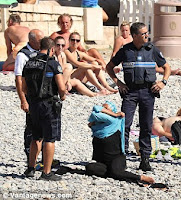 If the burkini has become the hot topic of the season, it has not only divided public opinion but the socialist government as well, where two female ministers (Education, and Health) took prime minister Manuel Valls to task over his pro-ban position and warned of a danger of unleashing racist rhetoric and stigmatization at a time of tension. 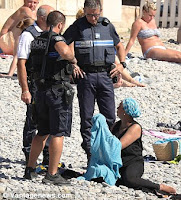 When the ban that began in Cannes in early August spread to 30 other coastal communities, including one in Corsica following a violent fight between three Muslim families and a group of locals resulting in injuries, it became international news. And the foreign press was happy to take it on and teach France a lesson. While they couldn't understand what all the fuss was about, the foreign media interpreted the burkini ban as both racist and ridiculous. The absurdity of the situation was made painfully clear in a photo sequence shot by an English photographer that shows three armed French policemen forcing a lone burkini-clad woman on a public beach in Nice to disrobe or be fined − a scene reminiscent of the "morals police" of theocratic Iran.

Although it is proud to call itself the land of Human Rights, it is no secret that France has an anti-semitic streak. It also seems unable to see its Muslim population as equal citizens of the republic despite its lofty national motto of Liberty, Fraternity and Equality for all. Like in George Orwell's Animal Farm, some are more equal than others. There is no doubt that the context of the recent terrorist attack that killed 86 people in Nice has created a volatile atmosphere and may have evoked an emotional response, but this does not justify the creation of any special laws, said the administrative court. 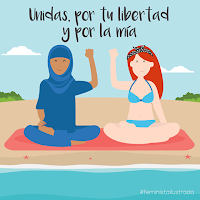 The burkini battle has also revived the French identity crisis which is never far from people's minds. Does the immigrant population from former French colonies in black sub-Saharan Africa and the Maghreb region of North Africa − people who do not look like us, tend to dress differently from us, and have more children than us − threaten our French identity? Can they assimilate into our society and adopt our way of life or to what point do we have to accommodate theirs? Frequent "clashes" indicate that there are no easy answers, but also show that assimilation has not been facilitated by government policy and that there are still many pockets of marginalized and disenfranchised immigrants in France, even if they have French citizenship.

While catholicism is still the main religion in France, the principle of secularism, voted into law in 1905, guarantees the free exercise of any faith and the state's neutrality in all matters of religion. Why then, I asked a friend one day, are there still so many official Catholic holidays in France? "Tradition," was his answer, which goes some way to explaining the fuzziness and confusion of so many French rules and regulations. 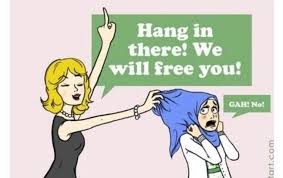 Tradition can also mean a fear of change, so palpable in France where change is often seen as a loss of something rather than a potential gain and to be resisted as long as possible. Hence, the rather perplexing fervor with which labor unions and socialists reject the right to open shops on Sundays. The weekly day of rest, rooted in the Catholic tradition, is turned into an obligation, a way to keep change at bay, even at the expense of those who voluntarily offer to work on Sundays in exchange for double pay. It may make France less competitive, but the idea of "protecting" workers from perceived exploitation, in other words, to keep things as they have always been, still prevails.

Schools are re-opening this week and politicians are flocking back to Paris, where the burkini will be slowly displaced by newer crises. Strikers won't be far behind, voices and banners will again be raised in the streets, and the whole diverse and complex world of French society will do its level best to keep it all together. It's the way it's always been.

Posted by Anne-Marie Simons at 5:38 PM