Simone Veil, French humanist, politician and feminist icon, died in Paris on June 30th at age 89. She was a Holocaust survivor who lost half her family in Nazi concentration camps, yet worked hard on the rapprochement with post-war Germany as part of her strong belief in a unified Europe. She is best known for the abortion law she wrote when she was Minister of Health and defended in an epic battle before a hostile Parliament. In three days of heated debate and a volley of insults in an Assembly of only nine women and 481 men, some of whom compared abortion to the Nazis' treatment of Jews and to embryos being thrown into the crematorium ovens, an uncompromising Simone Veil succeeded in pushing through her law (la Loi Veil) that legalized abortion effective January 1975. Her courage and dignity throughout this battle earned her widespread admiration, and opinion polls have consistently shown her to be one of the most beloved people in France.

She continued to champion women's causes and drafted legislation to expand the rights of women prison inmates. In 1979, she became the first female President of the European Parliament, was named Minister of Social Affairs a few years later, and in 1998 became a member of the Constitutional Council of France, a position she held for nine years. In 2010 she was elected to the illustrious Académie Française where she had her sword, which is part of the elaborate uniform of the Immortals, engraved with the concentration camp number she still wore on her arm.

If her professional life was marked with success and recognition, her private life was darkened by personal tragedies. Born Simone Jacob in a Jewish family in Nice in 1927, she was arrested by the Gestapo in 1944 and deported to Auschwitz together with her mother and older sister Milou, while her father and brother were sent to another concentration camp. Only she and her sister survived, but Milou was killed in a car accident six years later. Her father and brother were last seen on a Lithuanian convoy of Jewish deportees headed for Estonia, but no trace of them was ever found. As a student at the elite Sciences-Po in Paris she met her husband, Antoine Veil. They had three sons, one of whom died in 2002, and in 2013 Antoine died after 64 years of marriage. Two sons and 12 grandchildren survive her.

In a nationally televised tribute France paid homage to her in a funeral ceremony at the Invalides, attended by national and foreign dignitaries as well as crowds of admirers. In a solemn address President Macron bestowed a final honor on Simone Veil by announcing that she will be buried, together with her husband (per request of the family), in the Paris Pantheon among the Greats of the nation. She is only the fifth woman ever to be buried in this hallowed place whose portal bears the inscription: To the great men of France, a grateful nation. 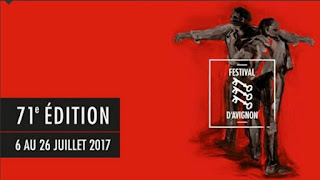 Summer equals festivals in France, especially in the sunny South with its many outdoor events. Villages, towns, coastal resorts, they all have festivals of one kind or another where high and low culture each have their place. Among the more important ones is the theatre festival in Avignon, founded 70 years ago by French actor and director Jean Vilar.

Since its modest beginnings in 1947 when Vilar presented three plays, this festival has grown into one of the biggest theatre events in the world, breaking its own record every year to reach an astonishing 1480 plays this year, performed in 128 venues (119 legitimate theatres and nine temporary accommodations in cloisters, courtyards, schools, etc.). These shows span all ages, from Greek antiquity to today, and all genres: drama, dance, poetry, one-man/woman shows, comedy, musicals, puppet shows. Increasingly, foreign plays are performed in their original language with French subtitles.

This year the festival opened with a presentation of Sophocles' Antigone, staged by Japanese director Satoshi Miyagi in the impressive Cour d'Honneur of the Popes' Palace that seats 2000. This nec plus ultra of Avignon settings is where the IN festival reigns, those 40-or-so plays that are performed in the best venues in town and are supported by government subsidies. Occasionally, the IN festival features big-name actors, such as Isabelle Huppert, Juliette Binoche, Jeanne Moreau, to name just a few.

The OFF festival of more than one thousand smaller productions must largely fend for itself but is often the place where new talent is discovered and where creativity may be greatest. Youthful enthusiasm is all around, and the fire-in-the-belly of these young actors is almost palpable as they roam the streets, hand out programs and try to draw you into their theatres. They need it − with performances starting at 10:30 in the morning and running past midnight every day, it takes energy as well as talent to keep up the pace. And to keep the hope alive that someday, somewhere, they will be "discovered" and offered a chance to shine in Paris. It happens. 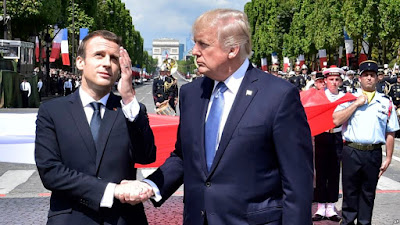 France celebrates its national holiday on the 14th of July, and this year President Trump was the guest of honor at the military parade on the Champs Elysées. The somewhat artificial reason for President Macron's invitation to Donald Trump was that this year marks the centennial of the United States' entry into the first World War. The parade was therefore led by American soldiers and some old WW-1 tanks. It was the usual display of military might and patriotic pride: sophisticated war machinery, well-choreographed troops, marching bands and flyovers, all meticulously executed under very high security. It was also an occasion to show Franco-American friendship and Melania Trump's dresses (she did beat Mrs. Macron in elegance).

The visit was not without risk in this country where Donald Trump has few admirers. Some accused Macron of grandstanding and catering to the enemy. Others see him as a savvy strategist who invited an embattled Trump in an attempt to obtain American support for French military operations in Africa and to try and reverse the US decision to withdraw from the Paris climate accord. Trump's tantalizing parting message that "something could happen with respect to the climate change agreement; we'll see what happens" lit a spark of hope. If this vague promise could become reality, Macron's charm offensive would have paid off handsomely. But we will not hold our breath. 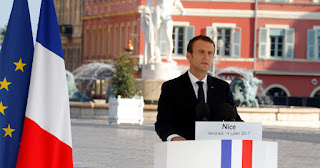 After the parade in Paris with Donald Trump at his side, President Macron flew to Nice which on this day remembered the victims of last year's terrorist attack by a radical islamist who drove his 19-ton truck into a crowd of people as they were leaving the July 14 fireworks, crushing 86 of them to death and wounding 443 others. In a somber and moving commemoration ceremony where the names and ages of the victims were read aloud, Macron added a name to the board of tiles that formed a heart-shaped list of the dead, placed temporarily near the site of the tragedy on the famous Promenade des Anglais seaside boulevard.

In an earlier speech before a packed crowd on the Place Massena, Macron vowed to continue the fight without mercy against terrorism and radicalism, and assured the attacks' survivors, many of whom are still undergoing treatment, of the State's continued support and aid. "We owe this to you," he said to the victims' families, as former presidents Hollande and Sarkozy, Prince Albert of Monaco, and a number of government ministers looked on.

At nightfall, following a last tribute on the Promenade, 86 blue light beams suddenly pierced the sky as 86 large white balloons ("our angels") were released in a final salute to each of the victims.

It was a moving and beautiful sight, bringing on thoughts of the randomness of death. Or of life.

Remember yesterday and live life today, because there may be no tomorrow.

Posted by Anne-Marie Simons at 5:52 AM