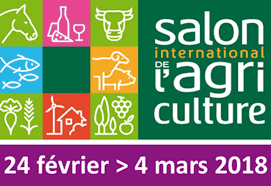 Last Saturday the 54th annual Salon de l'Agriculture opened in Paris and, as expected, President Macron was its first visitor. It's an obligatory passage for every French president, and Emmanuel Macron may have broken the record by spending 12-1/2 hours at the Salon on opening day. He wasn't always warmly welcomed, especially by farmers whose survival depends on the traditional subsidies contained in the Common Agricultural Policy (CAP) and the seven-year EU budget that will need to be discussed soon. Farmers fear that Macron may not defend these subsidies as his predecessors always have. [For background on the French farm and the role of subsidies, see blogs of  2/28/16 and 2/25/13.] 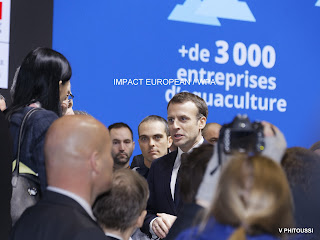 Indeed, the next EU budget negotiations to be held in Brussels in May will certainly be affected by Brexit and the loss of €12 billion per year in UK contributions, causing a significant shortfall in the next 7-year cycle of EU funding. The CAP subsidies, of which the French farmers receive the biggest share, will surely be among the proposed budget cuts. In addition, even if the contributions of the 26 post-Brexit members of the EU were to be raised, the next budget will have to incorporate increased expenditures in areas such as defense, border security, integration of immigrants, and innovation. It is no secret that those areas are closer to President Macron's heart than the controversial farm subsidies that have been a thorn in the side of many other EU contributors.

Nevertheless, no French president has ever dared touch the sacrosanct farm subsidies and any attempt to do so has always been countered by the powerful farmers' union and costly, disruptive protests by farmers who have the support of the French people, deeply attached to their terroir and willing to defend tooth and nail the farming methods of their fathers and grandfathers and their indispensable subsidies. Macron will have to tread carefully and try to find a balance between the traditional values of rural France and the demands of the new economics of globalization, without disappointing those voters who will hold him to his promise of a modernization of France. 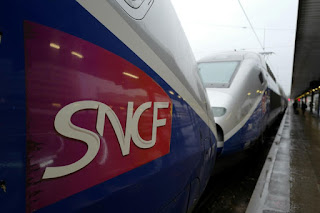 Another area of tension and disagreement is the costly French national railroad system where a major fight is developing between Prime Minister Edouard Philippe and four unions over the government's announced decision to overhaul the state-owned SNCF company in an effort to reduce its debt of more than 45 billion euros. The proposed reforms will end the preferential terms that rail employees have enjoyed since the company's nationalization in 1937, when trains ran on coal. These include a job for life and early retirement for many of its 260,000 workers. In response, the unions have promised massive strikes such as those that brought down Prime Minister Alain Juppé in 1995 after three weeks of total transport paralysis.

Prime Minister Philippe said the current SNCF situation is untenable as its debt grows by 3 billion euros a year, and recalled that a large majority of French voters had supported President Macron's 2017 campaign pledge to modernize France and ensure the economic viability of its national railway system before the end of his mandate. Moreover, he said, the SNCF company had to become more efficient before passenger travel is opened up to competition in the near future, as demanded by European Union rules.

Fuller details of the government's plans will be revealed in early March following a government-ordered study, and a parliamentary debate will take place in mid-March. But Mr. Philippe cautioned the unions that the reforms would be passed by decree, if necessary, thus avoiding a vote in Parliament. "That's blackmail!" cried the unions, as both sides prepare for a long and potentially bloody battle. 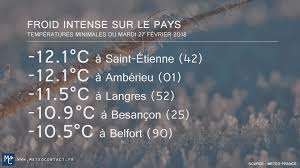 The Beast from the East, an icy blizzard from Siberia, blew across Europe this week, its arctic winds causing temperatures to drop to −10 degrees Celsius in much of France (feeling like − 18° C with the wind chill factor), and claiming four lives in the first two days. The government has opened additional emergency shelters for the homeless and is urging that young children and the elderly stay indoors as much as possible. Even the Riviera did not escape sub-zero temperatures, and Corsica broke a 30-year record when the beaches around Ajaccio were covered with 10 cm of powdery snow. The southern city of Montpellier was paralyzed for nearly 48 hours when 20-30 cm of snow immobilized trams and buses, and roads became impracticable. "We have no adequate snow removal equipment for this type of storm, which happens only once in 30 or 40 years" said a sheepish mayor Philippe Saurel, "and three rounds of salting across the city were simply not enough." The cold snap is expected to last one week.

As I reported in a March 2014 blog, the plane trees in Aix-en-Provence are infected with a deadly parasite (the incurable ceratocystis platani) that slowly squeezes the life out of the emblematic, blotchy Provençal platane that so enchanted Van Gogh. Some of these trees are more than a hundred years old, but once infected they can live another 50-60 years before their nourishment is completely choked off and they risk falling over in a minor storm, as happened with two city-center trees a few years ago. The mayor then declared that all 2000 platanes in Aix would be checked and the sickest ones felled, resulting in the removal of more than 40 trees on the Cours Mirabeau alone. It now appears that the surviving trees are infecting their neighbors, including some of the new saplings, and that the only way to stop the spread of the contagion is to take all the parasite-carrying trees down, as well as all those within a 35-meter radius! Sadly, this means the end of the leafy tunnel that for so many years has shaded the terraces along the Cours Mirabeau and elsewhere in town. The removal, soil disinfection, and replanting with 61 Acer Platanoides (Norwegian maples) will take 2-3 months, but many years will pass before they will spread their precious shade. 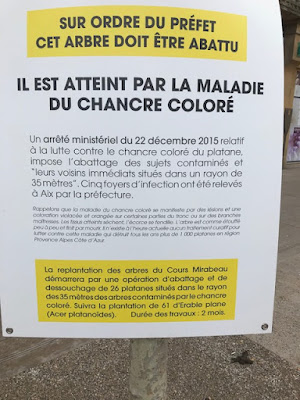 The buzzing of tree-cutting saws has now joined the ear-splitting noise of jackhammers and heavy equipment that are breaking up a number of streets and sidewalks in town, where a new 17-km Express Bus lane is being created in and around the city in an effort to increase the pedestrian areas and keep cars out of the city center. If all goes well and no significant Roman artifacts are found, this project will take one to two years. Added to the 3-year project of the renovation of the three squares in front of the Palais de Justice, which has one more year to run, a walk through Aix today has turned into a noisy, dusty, obstacle course that is sure to disappoint many a tourist.

We may reasonably expect that all this nuisance will be rewarded by improved living conditions in the old city center (more pedestrian streets, less traffic, less noise and pollution), but we have already been assured of one major gift: upon completion of the renovations in front of the Palais de Justice, a major Picasso museum will arise in a former convent on the Place des Prêcheurs. It is a gift to the city of Aix-en-Provence by Catherine Hutin-Blay, only daughter and heir of Jacqueline Laroque Picasso who was Picasso's last wife and muse. Mrs. Hutin-Blay recently bought the 12th-century convent that will become the Jacqueline and Pablo Picasso Museum to house the exceptional collection she inherited: over 2000 works from 1952-1973, many of them never shown before, including 1000 paintings and 1000 works of sculpture, ceramics, drawings and photographs. The museum will also have a 200-seat auditorium, a Picasso research center, and artistic workshops for ceramics and printmaking. Mrs. Hutin-Blay said she wanted the museum located close to the Chateau de Vauvenargues outside Aix-en-Provence where both Picasso and Jacqueline Laroque are buried. The museum is scheduled to open in 2021 and is expected to draw 500,000 visitors a year. 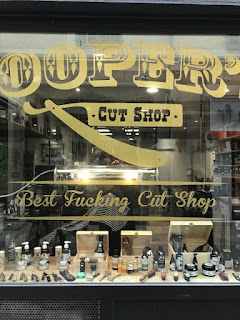 Curiously, the French language does not contain a wide range of swear words. Nothing like the Italians and Spaniards who go so far as to include your relatives and ancestors in their curses, or the English with their liberal use of sexual terms to express anger or just about any other feeling. It may surprise you, then, that the French have developed a fondness for the word 'fucking' which they use rather lightly and in some unexpected places.

Note the window on Cooper's, a traditional-looking hair salon on a high-end shopping street in Aix which is proud to call itself, in gold lettering no less, the "Best Fucking Cut Shop."

Not quite in the same league as the near-English I found at the "Handburger" restaurant, but likely to stop you in your tracks nevertheless.

Posted by Anne-Marie Simons at 5:50 AM