FROM PEDESTAL TO PAVEMENT; MORE STRIKES; WHAT NEXT?

FROM PEDESTAL TO PAVEMENT 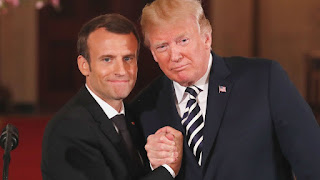 As Emmanuel Macron returned from his three-day state visit to the United States he found the French press notably less effusive about this trip than its American counterpart. Nobody really expected Macron to succeed in changing Trump's mind on the Paris climate agreement and on the Iran nuclear deal, but state visits are prestigious and hold the promise of diplomatic and commercial gain. Mutual laudatory remarks, especially between oldest allies, are de rigueur, but the best-buddies show of bearhugs, backslapping, kisses and holding hands, not to mention dandruff flicking, was perceived at home as a rather embarrassing love-in unbecoming a president of France. 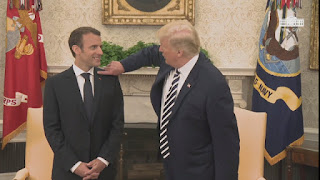 In many ways these two men are each other's opposites: globalist vs. nationalist, intellectual vs. populist, environmentalist vs. climate change denier, erudite vs. street smarts, diplomat vs. bully, but they are both presidents of important countries and undeniably need each other. Hence, Macron had everything to gain by playing along with best pal Donald.

Not until he addressed a joint session of US Congress did Macron come into his own. His forthright speech was repeatedly interrupted by applause and ended with a standing ovation even though much of what he said contradicted Trump's position. In a later town-hall meeting with 1000 students at George Washington University, a relaxed Macron in shirtsleeves, speaking English without notes, encouraged those frustrated with the American political system to challenge it and create their own. Pointing to himself and his unexpected presidential win, he said that everything is impossible until it isn't. "Your generation is the one to decide for itself. You will face significant challenges in the coming years and tomorrow's leaders will have to come up with innovative solutions to improve the global economy, tackle climate change and manage geopolitics." In these areas and many others, "you must take your responsibilities," he said, before he left the stage to shake hands, submit to selfies, and enjoy a rock-star exit as he moved on to a press conference next door with French and US media for another impressive performance.

Even though he failed to change Trump's mind on the Paris and Iran agreements, Macron earned credits on this state visit. It allowed him to show that he has the makings of a world leader − he is fearless, intelligent, ambitious, persistent, and a good speaker, qualities he will need to push through his sweeping reform program in France and further his aspirations for the European Union where he now is the leading man.

Nothing like a French labor crisis to burst Macron's bubble and quickly bring him back to the harsh reality of strikes and demonstrations at home where negotiations between the government and the national railway unions had broken down. The traditional May 1st celebration with the customary workers' march in Paris was interrupted this year by a group of more than 1000 Black Bloc anarchists who threw rocks and firebombs at police, vandalized businesses, torched a McDonald's restaurant, and set fire to cars and heavy mechanical equipment along the route as they shouted anti-capitalist slogans. Police used tear gas and water cannons to disperse the crowd, and some 200 anarchists were detained. Mobilized by encrypted messages on social networks, the ultra-left black bloc rioters describe themselves as anti-fascist, anti-globalization, anti-capitalist, anti-police, revolutionaries who model themselves after their German 'colleagues' of the 1980s. Needless to say they did not help their protesting fellow marchers whose message was drowned out in the violence.
A second protest was then planned in the form of a tongue-in-cheek "Party for Macron" on May 5th, organized by left-wing firebrands François Ruffin and Jean-Luc Mélenchon of the La France Insoumise (LFI) movement, who called on all those who oppose Macron's reforms to join together and march in Paris on the first anniversary of Macron's presidency. Nearly 40 thousand people attended and, amid a reinforced police presence, this demonstration remained peaceful in a rather party-like atmosphere as many marched with their children on this sunny Saturday that ended with a free concert.

In the meantime, more than half of Air France's employees rejected their management's latest offer in the ongoing salary dispute, and the company's president subsequently resigned. So for now, the two days/week railway and airline strikes continue and another date was set for all concerned, including hospital personnel and all those who work in the public sector, to march again on May 26th.

In the middle of all the unrest, the students who had been occupying various universities in protest against proposed changes in the university admissions system were dislodged by police and classes reopened for those who want to take their June exams. The truce may be short-lived, however, as many students have vowed to join the May 26 march.

To date, the government is holding firm even though Prime Minister Edouard Philippe said he is keeping the door open for amendments to the final rail reform text to be voted in Parliament on May 28th. The various transportation unions have vowed to be equally unyielding and a sense of generalized frustration and fatigue is spreading among strikers and citizens alike.

Are Macron's reforms too ambitious and is he moving too fast? Does he deserve to be called The President of the Rich who is disconnected from the working class? Is he ready to face the growing discontent, not only from the rail workers but from other public sectors as well, with the potentially dangerous consequences of a convergence of complaints in a massive nationwide protest?
The answers may well come from "the street" as so often before. 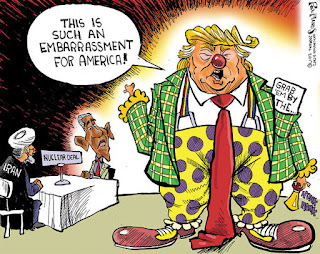 This month of May has its share of challenges for the Macron government, but they are no more than a street brawl compared to the new dangers unleashed by President Trump's withdrawal from the Iran nuclear agreement. As we hold our breath for the fallout, we in France may congratulate ourselves on the quality of our government and the protections afforded by our parliamentary system.

But that is scant consolation if one irresponsible madman in the US can unilaterally declare hard-fought multilateral agreements nul and void, riding roughshod over the other signatories and over the pleas of his Western allies.

Choose your worst-case scenario.  It is no longer unthinkable. 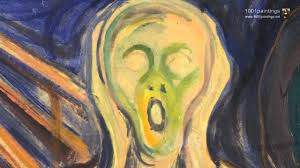