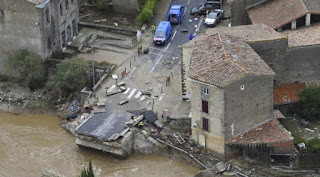 Fall arrived with a bang in the south of France where serious floods in the Aude region, in and around the city of Carcassonne, caused 14 deaths last week and the greatest devastation ever registered there since 1891. Bridges and roadways were washed away, cars, trees, and heavy debris tossed around like so many toys, and houses flooded, sometimes to their rooftops. In the small town of Trèbes, hardest hit, a number of people were rescued by helicopter while others had drowned inside their house. Not a single front door in a nearby village had resisted the force of the rushing water which quickly rose to the third floor, trapping some in their beds.

An Orange Alert had been issued that day, warning of heavy rains and potential flooding, and raised to a Red Alert later on in the evening when some may already have been asleep. As the weather service explained later, rainstorms can be forecast with a certain amount of accuracy but it is near impossible to predict where exactly the torrential downpours will occur. As the storm progressed and meteorologists concluded that the Aude Valley lay directly in its path, they changed the alert to Red and local authorities began to issue evacuation orders. However, villagers in this valley are quite used to Orange alerts and many of them do not like to leave their sturdy age-old houses which have survived so many storms before. They may have regretted their decision to stay on but were unanimous in calling this a phenomenon "the likes of which they had never seen before" − the same sad refrain heard throughout this summer following record-breaking floods, droughts and fires from Capetown to the Arctic. 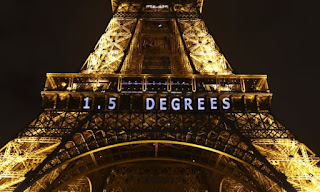 Of course, it is now a scientific fact that these ever-increasing natural disasters are a direct result of man-made global warming. But last week the UN's Intergovernmental Panel on Climate Change (IPCC) delivered a shocking report showing that global warming has increased faster than expected and that we have only 12 years left to keep the temperature increase down to 1.5°C by 2030. Even one half degree more (the Paris Agreement aimed for "between 1.5°C and 2°C") could double the risk of severe droughts, flooding and fires that would affect untold millions of people. The proposed solutions are costly but the cost of doing nothing would be far higher and fatal for many. It is no longer a political choice but a moral obligation for our leaders to safeguard a livable planet.

The unconscionable decision of president Trump to withdraw from the Paris Agreement on Climate Change affects and endangers us all, and would be significantly aggravated if Jair Bolsonaro, presumed president-elect of Brazil, were to follow Trump's example and withdraw Brazil as well, as he mentioned during his campaign. It is to be hoped that the other signatories to the Paris Agreement (195 in all) will find a way to prevent this.

Two weeks after France's Interior Minister Gérard Collomb tendered his resignation earlier this month, President Macron finally announced the appointment of Christophe Castaner as Minister of the Interior. An early Macron supporter, Castaner left the Socialist Party in early 2017 to join Macron's new political movement En Marche, and was rewarded with the job of government spokesman and subsequently Liaison with the Parliament. The appointment is seen as an appeasement to the Left's growing perception that Macron's policies are veering to the right in matters of budget and immigration. In the shakeup, four ministers were replaced, including embattled Minister of Culture Françoise Nyssen.

Macron's approval ratings have plummeted since the Benalla Affair (see August 8 blog) and the resignation of popular Ecology Minister Nicolas Hulot a month later. But the unexpected resignation of political heavyweight and Interior Minister Gérard Collomb, former Socialist mayor of Lyon and at 72 the most experienced politician in Macron's young Cabinet, created a power vacuum that sparked the reshuffle. It took Macron fully two weeks to form his new government, which some speculated was due to difficulties in finding willing candidates. An Elysée insider called the new team dynamic, with a second wind but the same political mandate. In a televised address the next day, a solemn-looking Macron said that his government will stay the course and that he plans to maintain his calendar of reforms in the coming months "when difficult decisions will have to be made."

Despite his problems at home, Macron's international standing remains high but it is far from certain that he can regain the voters' confidence in time for the European parliamentary elections next March, where in a worst-case scenario a wave of right-wing Eurosceptics might be elected to the EU Parliament in Strasbourg. And rising nationalism in Europe is not his only worry when the US president keeps breaking international agreements left and right, causing Macron to pick up the banner for such causes as the Paris Climate Agreement, a deal with Iran, the preservation of international institutions such as the UN Human Rights Council and the International Criminal Court in The Hague, but above all multilateralism which he defended so passionately before the UN General Assembly last month. The contrast between the Macron and Trump messages, between globalism and isolationism, between statesmanship and populism, could not have been greater.

In less than two years as French president, Macron has won recognition and appreciation on the international stage where he has chalked up some wins and some losses, but even an ambitious and energetic 40-year old has only 24 hours in a day, and burning the candle at both ends has its consequences. Some minor incidents of his own making have dimmed his glow and slowed down his progress. Perhaps the renewed Cabinet will give him a breather in preparation for the next battle over his Reforms, which no French president, from de Gaulle on, has ever been able to win.

French singer-songwriter Charles Aznavour, whose career spanned eight decades, died on October 1st at age 94 at his home in Provence. Upon the announcement of his death, the Eiffel Tower lit up in gold in tribute to "the last of the giants of the French chanson". 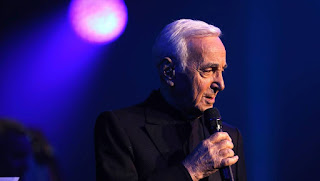 Born Shahnour Aznavourian in Paris to Armenian parents, Aznavour recorded some 1400 songs, 1300 of which he wrote himself, and sold more than 100 million records in his lifetime. He began his singing career as an opening act for Edith Piaf at the Moulin Rouge, and over time recorded with Frank Sinatra, Elton John, Céline Dion, Bryan Ferry, Sting, and Liza Minelli, as well as with Placido Domingo and Luciano Pavarotti. Multilingual and an inveterate traveler, he has recorded in a number of languages and was named "Entertainer of the Year" by CNN in 1998 because of the global reach and popular appeal of his songs.

He may be less well known for his film career. Starting as a child actor when he was 9 years old, he appeared in some 70 films, most notably Truffaut's Shoot the Piano Player and the Oscar-winning The Tin Drum. In 2017 he was awarded a star on the Hollywood Walk of Fame.

The nation paid homage to Aznavour with a sober ceremony at Les Invalides, site of Napoleon's tomb in Paris, in the presence of both President Macron and Prime Minister Nikol Pashinyan of Armenia. His coffin, draped in the French flag, was carried into the famous courtyard where a spray of flowers in the colors of the Armenian flag awaited as an Armenian folksong was played on the traditional dudek flute. In his eulogy, Macron spoke of the many Aznavour songs that accompanied three generations of us and will be eternal "because poets never die." Prime minister Pashinyan declared a national day of mourning in his country for its famous son and benefactor. 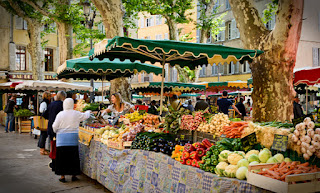 And then, suddenly, another vacation was upon us − this time the two-week school holiday of Toussaint, the celebration of All-Saints Day. [In spite of its official secularity, France celebrates every Catholic event with a holiday.] It seems like only yesterday when the 2-month-long summer holidays ended and children went back to school in early September. But the French school year includes a break every six weeks and, as usual, many people use these breaks to leave home − for the countryside, a family visit, or an all-in trip abroad. The first sign of these school breaks for those of us without young children is the announcement of traffic conditions on the morning news, with alerts of congestion or accidents on the clogged exit roads of major cities ("all fluid" this morning). 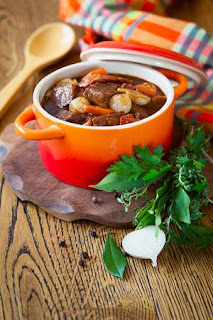 As the weather continues to be unusually warm for this time of the year, certain summer dress styles persist on the city's sidewalks, like the tiny shorts and flimsy tops on teenage girls who never seem to be cold. Even so, we are slowly moving from our favorite summer rosé to red wine as the multiple mushroom varieties appear on our market stalls and the idea of winter food is beginning to make its way to the surface.

The daily farmers' market in Aix-en-Provence has managed to open my supermarket-trained eyes to nature's seasonal gifts, which in this blessed part of the world are bountiful at all times.
So, as a convert to the food-driven French lifestyle, I raise my appéritif to the hearty stews, cassoulet, choucroute garnie, venison, game, chestnuts and truffles in the coming months.

Mother Nature has a nice way of making up for shorter days with longer meals.

Posted by Anne-Marie Simons at 8:54 AM