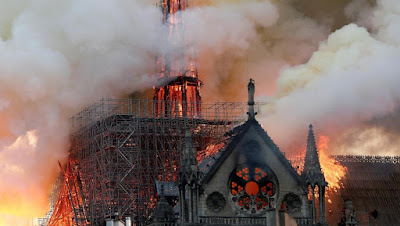 In the early evening of April 15th, when we were all waiting for President Macron’s televised address to the nation in response to the Gilets Jaunes crisis, a picture of Notre Dame de Paris in flames suddenly flashed onto our screens. Within minutes, the Elysée Palace announced the cancellation of Macron’s speech and his hastily arranged visit to the site of the devastating fire that nearly destroyed the 850-year old Gothic cathedral. The image of this ultimate symbol of Paris engulfed in flames will be forever etched in our minds, like the pictures of the twin towers burning in New York. When the tall spire collapsed and fell through the roof an audible gasp went through the crowds, while those of us who stared at our television screens still hoped this was just a movie scene. Sadly, it was not, and Notre Dame, which survived the French revolution and two world wars, was surely dealt its greatest blow ever right in front of us. 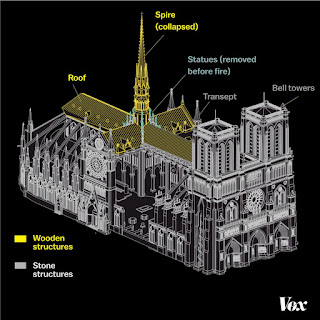 The scene was unreal and unbearable. Not our Notre Dame! – this essential part of French history, its culture and its literature, which the French hold dearer than any other monument. Please, not this place where kings were anointed and Napoleon crowned himself emperor in 1804; where Joan of Ark was sanctified and her rehabilitation process was held; where the Crown of Thorns that sainted king Louis IX purchased in 1239 after one of his crusades is kept; where funeral masses for French presidents and the end of two world wars were celebrated, and where sorrows were soothed in the aftermath of national tragedies, most recently after the November 2015 terrorist attacks in Paris. For French Catholics it is the mother church where the great and the humble have come to kneel in prayer for centuries; for the non-religious a Gothic jewel and architectural masterpiece; for tourists a must-see and photo opportunity. For all, the heart and soul of Paris.

With 14 million visitors per year, Notre Dame is the most-visited monument in France, age-old star of books and films, and literally the center from which all national roads emanating from Paris are measured, as a plaque in the pavement in front of Notre Dame indicates. The intricate wooden structure of its roof support consists of hundreds of 850-year-old oak beams which measures 110 meters long, 13 meters wide and 10 meters high, and is called “the forest” because of its size and the fact that it took a whole forest to produce the wood. Ironically, no electricity was ever installed in this upper structure of very dry wood so as to minimize the fire danger. Built between the 12th and 14th centuries, the cathedral has undergone a number of restorations and expansions, but never knew a major fire. 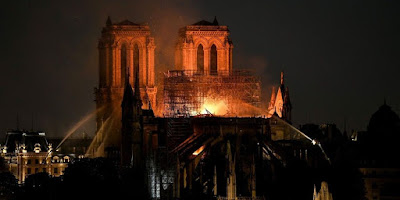 As groups of shocked onlookers huddled together in the streets of Paris that night, cell phones held aloft to register what their eyes could not believe, the first donations began to pour in, topped by the generous gift of 100 million euros from French billionaire Henri-François Pinault. Before the night was over, his rival and fellow billionaire Bernard Arnault had pledged 200 million euros from his family and the LVMH conglomerate to the rebuilding fund. And the next day it was reported that French company L’Oréal added another 200 million euros to the fund. For once, there was no grumbling about the super rich in France. President Macron confirmed in the morning that thanks to the heroic all-night efforts of 400 firemen, the severely damaged building was saved and that Notre Dame will be rebuilt with funds from the State, as well as corporate and individual donors. At last count, the corporate and private donations have grown to 880 million euros in 48 hours and continue to flow in from all over the world.

Early reports say that some of the Notre Dame treasures (including the Crown of Thorns and the hair shirt of devout king Louis IX) were saved before the fire spread and that the three large stained-glass rosette windows, dating from the mid-13th century and each measuring 13 meters in diameter, have survived, partly thanks to the intelligent spraying of the windows with enough cooling water to keep the lead joints from melting, but not enough to break them. They are covered with soot and will need restoring but they are largely intact, while many other windows have exploded in the heat. Less is known about the condition of the three organs, especially the Great Organ which was begun in a smaller version in the 15th century and after a number of additions attained its current size in the 18th century with 8000 pipes, 119 stops and five keyboards. Today it is listed as a classified monument. If a quick first inspection is confirmed in the coming days, it was damaged but can probably be repaired, which would be a second narrow escape for this exceptional organ that survived the Revolution in extremis when the then organist began playing the Marseillaise as the insurgents entered the cathedral. 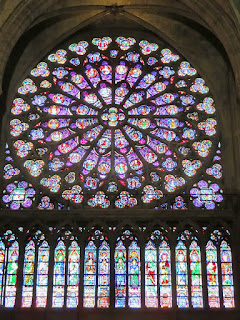 The cause of the fire is still under investigation but it is believed to have started on the roof, probably around the spire. The priest who was celebrating the 6PM mass, one of five daily masses at Notre Dame, has said that he smelled smoke but saw no fire and that after mass, around 6:45PM, he went outside and saw flames on the roof around the base of the spire. An alarm had sounded earlier but nothing was found. A second alarm pinpointed the location of the flames which by then were shooting upward from the roof.

It is difficult to overstate the importance of this largest of French cathedrals which extends far beyond religion and national borders. The French have always had a strong emotional, almost visceral, attachment to Notre Dame. In this lay country where only 4 percent of the Catholic population observes Sunday mass, it was a bit of a surprise to see people standing in silent clusters, mesmerized and teary-eyed, only to suddenly join in spontaneous prayer or in singing Christian hymns. Overcome by sadness, they lost their reserve and sought comfort in each other, sharing what one of the newspaper headlines called: Notre Drame de Paris.

On the night of the fire President Macron returned several times to the site, where he got a progress report directly from the commander of the fire brigade and was allowed, shortly after midnight, to step a few meters inside the cathedral for a first glimpse at the interior damage (roof two-thirds gone, spire crashed into pieces right in front of the main altar which was heavily damaged except for the large golden cross that curiously seemed to shine brightly in the darkness).

Among the mass of the roof’s rubble, the copper rooster that had perched proudly on top of the spire with three relics inside it, was found miraculously in one piece though dented and in need of repair. It is not known at this time if the relics were still inside.


The next day on the evening news, Emmanuel Macron praised the firemen and the French people’s strong sense of solidarity in hardship. In France we have always built cathedrals, he said, and we will rebuild this one as well with our rich source of artisans of old—stone cutters, master carpenters, artists and restorers of all kinds—these noble trades that have never died in France. And he promised to see this done in five years, in time for the 2024 Olympic Games in Paris. Overly optimistic? Perhaps, but we all want to believe it. 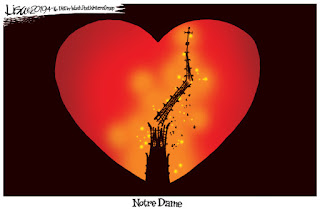 When I look again at our beloved Notre Dame, corseted in her scaffold, bloodied but standing, I see the ultimate survivor and I know she is here to stay.

Posted by Anne-Marie Simons at 8:58 AM