We are in holiday mode again with schools being closed the last week of October. Having just come back from their long summer breaks in early September, French children next get a week off for la Toussaint, All Saints Day. Many city dwellers pack up their family and leave for the countryside or the coast for a week "away." And, let's face it, with a starting level of 30 days vacation, the French have enough time off to do this several times a year. Traditionally, this is a time for family gatherings and for going to the cemetery to put flowers on family graves -- usually potted chrysanthemums which, by the way, are considered cemetery flowers here and are never to be given as gifts, especially not on hospital visits. Lately, however, Halloween has become part of this Fall holiday which, considering its Celtic origins, should be no surprise. Even though it still resembles more an at-home dress-up party with scary masks and costumes than the street event where American children go out ringing doorbells and trick-or-treating, French commercials are increasingly featuring Halloween themes, pastry shops are offering special desserts and candies, and pumpkin growers produce extra crops for jack-o'-lanterns. Yet, many French remain weary of commercialism and of the introduction of "American" celebrations. Is Halloween here to stay? The jury is still out... 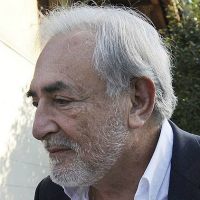 A rather sordid scandal in Lille, involving organized prostitution in the luxury Carlton Hotel, has claimed its first victims. Police are investigating a prostitution ring that catered to high-flying businessmen and local officials and even supplied prostitutes for encounters in nearby Belgium. The hotel's PR manager and a French businessman are being held for questioning, and the local police commissioner has been reassigned to a lesser post in Paris, which gave him the opportunity to resign and take early retirement. But as the investigation continues, a new big-name client has surfaced:  Dominique Strauss-Kahn. It is claimed that DSK was offered prostitutes from the Carlton Hotel to join him, including most recently at the Sofitel hotel in New York City on the Friday preceding his Saturday assault on a maid in that hotel. DSK has requested to be heard by police as soon as possible "to put an end to the insinuations."

Posted by Anne-Marie Simons at 7:32 AM