In the Vacation Bound item of my last posting, I mentioned that in spite of the financial crisis 53% of all French people have plans to take at least a one-week vacation away from home this year. That should have been 67% - fully two-thirds - of all French, as confirmed by Protourisme at the recent Salon Mondial du Tourisme in Paris. The same source announced that nearly 80 million foreign tourists are expected to visit France in 2012, over 3% more than in 2010. 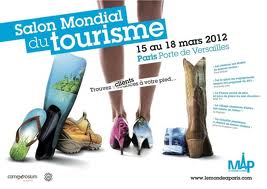 In Lyons the driving inspectors have decided to strike for a wage increase after negotiations with the government broke down. This is expected to delay between 1000 and 2000 driving tests, a nuisance we have experienced ourselves a number of years ago when inspectors in Aix-en-Provence struck in protest against aggressions by students they had failed. At that time, test results were given right away but today they are announced by mail. Driving tests are more difficult here than in the United States and many applicants fail at least once or twice. Depending on the time of year, getting a new test lined up can take months so an inspectors' strike is a big deal. One consolation is that you'll go through this misery only once since a French driver's license is issued for life!


After a major bomb scare in January which required 4300 people to be evacuated, another bomb was found in Marseilles when a heavy road drill accidentally pierced a World War II bomb, this time of German origin, and partially set it off. Miraculously, the explosion caused only two minor injuries but removing the damaged bomb with its 650 kilos of explosives and the drill head still inside posed a challenge. About 1500 people were evacuated during the removal operation in the Joliette neighborhood where the bomb was found. Luckily, Joliette consists mostly of office buildings including the impressive new headquarters of shipping giant CMA-CGM, a 142-meter glass tower designed by world-famous architect Zaha Hadid. Had the full charge of the bomb exploded, experts say, it would have flattened two city blocks.


The port of Marseilles was heavily bombed during World War II, and with more construction work going on around the port area in preparation of next year's 2013 Cultural Capital of Europe celebrations, there is some fear that this may not be the last bomb to be discovered. On the other hand, since the end of the second world war much construction has taken place in France's second-largest city, including a metro in 1977, without a single bomb scare.


HOLLANDE DRAWS PEOPLE
During this presidential election campaign a newspaper headline: "François Hollande s'entoure de people" seems unremarkable enough. But those among you who do not speak Franglais might have concluded that François Hollande attracted people, which is the least one might expect from a presidential candidate. Things become more interesting when you know that "people" in France has acquired the specific meaning of "famous people," or "stars." Pronounced peepull (rhymes with dull) and sometimes spelled "pipole" in the French press, this new word has the peculiarity of always being used in the singular, as in "un people" for "a famous person" or "la presse people" for tabloid press or gossipy magazines with lots of pictures, like our People magazine. In Hollande's case, the term referred to some of the well-known people who appeared at his side during the recent Salon du Livre in Paris, such as Alexis Jenni, recent winner of the Prix Goncourt (equivalent of our National Book Award), Stéphane Hessel, and Jeanne Moreau. It was an occasion for Hollande to announce that, if elected, he would reduce the value-added tax on books from 7% to 5.5% and regulate the leases on inner-city bookstores to allow them to stay in town. 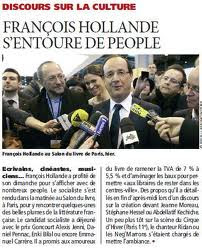 (*)  Check out Taking Root in Provence for driving license requirements in France and for the joys of Franglais; click here.
Posted by Anne-Marie Simons at 1:52 PM