Dominique Strauss-Kahn cannot seem to stay out of the news. For the past few days radio, television and newspapers have covered - ad nauseam - his latest troubles with the law which, in fact, are not new but simply the progression of his legal cases in France and the United States, i.e. his involvement in the "Carlton Affair" in Lille and the civil lawsuit in New York filed by hotel maid Nafissatou Diallo for an alleged rape attempt.

After a hearing in Lille on March 26th - two days earlier than previously announced to avoid the media circus that had made the first hearing so difficult - DSK now stands charged with "aggravated pimping" which carries a potential sentence of 20 years in prison. During this second hearing DSK admitted to attending "libertine parties" but still maintained that he did not know that the participating women were paid prostitutes. The investigating judges seem to have rejected that argument, based on a number of text messages between DSK and those who supplied the girls. After posting 100,000 euros bail, DSK was free to go until further notice.

Meanwhile, in New York City the civil suit against him was certainly aggravated by the French charges and DSK's lawyers have announced they will plead diplomatic immunity as their defense. A large amount of money will probably settle this case which, nevertheless, may take up to two years before it's concluded.

After the shock of the perp walk and Ryker's Island last year, which the French witnessed with horror and denunciations of the savagery and brutality of the American judicial system, today the mood in France has turned against DSK. This time there seems to be a merciless attempt to do irreparable damage. The usual scenario - he did wrong, he'll pay the price, end of story - does not apply here as it did for Bill Clinton, Elliott Spitzer and numerous others. Puritan America is less quick to forgive sexual misconduct than France or Italy where this may draw a slap on the wrist and a wink from the judge ("Don't do this again, you lucky bastard"). Remember that the French press knew of President Mittérand's mistress and illegitimate daughter, but out of respect for the man and his position never breathed a word of it until after his death. All the more surprising then that the respected French newspaper Le Monde - a real opinion maker and as far from the gutter press as you can get - has just leaked the transcript of DSK's first hearing in Lille, including the denigrating terms he used to describe women. It seems sensationalist and unnecessary - the man is down and out, and kicking him now borders on the bloodthirsty. Wherever he is headed - to prison, surely to banishment for life from the French political scene where as little as a year ago he seemed poised to become the next French president - this broken man should be allowed to disappear quietly and walk the path to his personal hell without the vengeful clamor in the media today.

Curtis Roosevelt, 82-year old grandson of Franklin and Eleanor, lives in a hamlet in southern France where he settled 13 years ago. This tiny village may be sleepy but Curtis is not. He writes chronicles for the Huffington Post and has now joined a collective named Roosevelt 2012 together with other old agitators like 94-year old Stéphane Hessel (known for his phenominally successful pamphlet-length book Time for Outrage, published at age 92), 90-year old French philosopher and sociologist Edgar Morin, and 81-year old Michel Rocard, member of the European Parliament and former socialist Prime Minister of France.


Their objective is to "snap at the heels" of the candidates in the current French presidential race, to raise their awareness of the similarities of today's problems with those of the Great Depression of 1933, and to urge immediate action. They want socialist candidate François Hollande to beat incumbent Nicolas Sarkozy, but only if he commits to fulfilling within the first three months of his presidency the 15 conditions they outlined in a little booklet that came out on March 28, 2012 entitled C'est plus grave que ce qu'on vous dit... Mais on peut s'en sortir ("It's worse than you've been told, but we can beat it"). Written by Roosevelt 2012 member Pierre Larrouturou, the economist of the group, it pleads for a re-start of the economy by means of certain fiscal measures that were used successfully by Franklin D. Roosevelt in his New Deal.

When not engaged in politics, Curtis Roosevelt has been involved in the preparation of the French edition of his autobiography "Too Close to the Sun" which is scheduled to appear in September 2012.

In his quiet corner between Nîmes and Avignon, he enjoys buying fresh products at the village market where everyone calls him "Curtis" and where - in spite of his poor French - the local people have come to understand and enjoy this kind American who orders his fish "saignant" and who professes a great appreciation for "la table et le fun." "Like my grandfather Franklin," he says.

This time I'm really off and away for a month. But before leaving I'll share with you an unusual Easter card I received from an Italian friend. With all due apologies to those who believed Easter eggs came from the bells of Rome, I wish you all a Happy Easter. 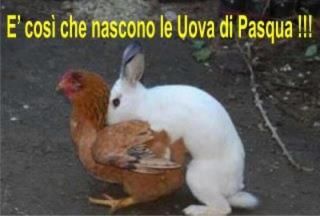 See you again in May.

Posted by Anne-Marie Simons at 6:51 AM