IT RAINED ON HIS PARADE...

May 15, 2012 was a memorable day here. On that day François Hollande was sworn in as the new president of France. After a brief ceremony at the Elysée Palace where outgoing president Sarkozy "handed over the keys" to François Hollande, the new president took place in an open-roofed car and, accompanied by the Garde Républicaine on horseback, left with his motorcade for the traditional Défilé sur les Champs Elysées to the Tomb of the Unknown Soldier at the Arc de Triomphe. Dressed in a dark suit and without overcoat, Hollande was standing up in the presidential car to receive the acclamations of an enthusiastic crowd. It was impressive, it was colorful, it was perfect until it started raining. As umbrellas went up everywhere, Hollande stayed upright and continued to wave until he was completely soaked. Dripping wet he laid a wreath at the Arc de Triomphe, then returned to the Elysée for a celebratory lunch and a change of clothes.

Later that afternoon, he flew to Berlin through stormy skies and his presidential plane was hit by lightning. The pilot decided to return to Paris where the presidential party changed planes and took off again, arriving in Berlin with an hour's delay. There, Chancellor Merkel received President Hollande with all due pomp and circumstance, including the inspection of troops and a slow walk down the red carpet in a driving rain. Another soak and another change of suits before their meeting and the official dinner.

Was this an auspicious beginning (Marriage pluvieux, marriage heureux)? Or a Wagnerian sendoff with thunder and lightning and the Teutonic menace of bad things to come? Stay tuned.

As always, the Cannes film festival (May 16-27) had its memorable moments but this year was mostly marked by rain. Torrential rain, in fact, like the cloudburst on May 20th just at the time the stars arrived for their famous Montée des Marches and the long walk down the red carpet into the theatre. As it happens, these were the stars of the movie "Amour" by Austrian director Michael Haneke which ended up winning the Palme d'Or this year:  Jean-Louis Trintignant, Emanuelle Riva (both in their eighties) and Isabelle Huppert. 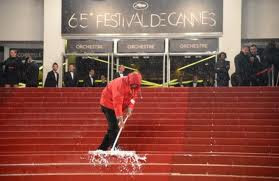 Despite repeated sweeping, the red carpet was a spongy mess, but - noblesse oblige - the stars did their professional best to keep smiling and posing for the hordes of photographers and trying to keep their windswept hair out of their eyes. When she got to the top of the stairs, Isabelle Huppert, her beautiful evening dress streaked with rain, shook herself like a dog and tried to lift the wet hair from her forehead and fluff it back into the expensive natural look a hairdresser had labored over just hours ago. A moving Jean-Louis Trintignant, much aged since the murder of his actress daughter Marie Trintignant a few years ago, looked fragile and windblown as he shuffled to his seat on the arm of Isabelle Huppert.

Outside the Palais du Festival the mood was down. The recent excessive rains had washed away whole chunks of beach and with it such commercial activity as lounge chair and parasol rentals, etc. Except for brief spells of intermittent sunshine, this year's festival was a washout for the beach merchants.

And that was not all...
As thunderous clouds hung over the Cannes closing ceremony, a violent hailstorm severely damaged nearly 6000 hectares of vineyards around Brignolles, some 60 miles away in the Var region. The size and weight of the hail stones were such that most of the young shoots and their barely budding grapes were knocked off the vines, destroying from 60 to 100 percent of this year's harvest in the area.

Is there any bright spot in this picture? Perhaps the fact that the threat of drought that everyone was talking about a few months ago has been averted. The groundwater level which was dangerously low in many parts of France earlier this year, seems to have been restored to healthy levels and the threat of dry swimming pools this summer eliminated. Ouf.

Posted by Anne-Marie Simons at 9:19 AM