Valérie Trierweiler,
domestic partner of French President François Hollande, will continue to work as a journalist for Paris Match magazine but will switch from political reporting to covering Art and Culture. In a little dig at her critics she opened her first article, a book review of "Eleanor Roosevelt, First Lady and Rebel" by stating: "How about that? A journalist First Lady is nothing new!" pointing out that Eleanor Roosevelt, mother of six, had written freelance articles for a number of publications before beginning her daily syndicated newspaper column on life at the White House, which she continued writing until her death. Clearly identifying herself with Eleanor Roosevelt, Trierweiler goes on to say that Franklin Roosevelt's wife had an independent nature and allowed herself to disagree with her husband on certain issues. In an interview with a fellow journalist, Trierweiler has also said: "As a mother of three, my job is vitally important to me. I have to earn a living and, besides, it's a form of normality." 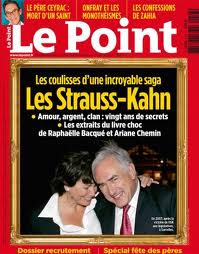 As former IMF Director Dominique Strauss-Kahn continues to battle his legal problems in France and the United States, a book has just been published (8 June 2012) about the private life of DSK and his wife, journalist Anne Sinclair. Titled Les Strauss-Kahn and written by two female journalists of the newspaper Le Monde, the book reveals that on a personal level Dominique Strauss-Kahn and Nicolas Sarkozy were closer than generally known. They shared a number of wealthy friends from the business world and from both sides of the political spectrum, and frequented each other's homes from time to time. Nevertheless, Sarkozy knew all the rumors about DSK's sexual exploits and was kept well informed by police sources of his regular visits to Parisian sex clubs as well as an incident in a steamed-up car in the Bois de Boulogne containing DSK and several partners. These reports were carefully kept under wraps but the decision was made to send high-risk Strauss-Kahn off to the IMF in Washington and away from the political fray in France for a while, reportedly with a warning from l'Ami Sarkozy to watch his ways because "Americans won't go for this." 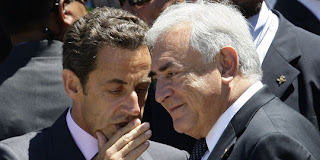 Sarkozy as well as many other political figures in France were convinced that DSK's womanizing and his libertine lifestyle would stand in the way of his ever being elected as president of France in spite of his obvious professional qualities. One commentator compared Les Strauss-Kahn to Tom Wolfe's The Bonfire of the Vanities, the story of the fall of another Master of the Universe.

I just attended a conference and book signing by Douglas Kennedy, successful American novelist, at my favorite English bookstore in Aix-en-Provence. As book signings go, this was a mob scene. Kennedy is an engaging speaker in English as well as French, and the fact that his novels were available in both English and French surely contributed to this success. Interestingly, the crowd was about evenly divided between youngsters and retirees, who all patiently waited in line to have their copy signed − a hopeful sign that not all young people have succumbed to the mania of reading only ebooks.

Two weeks ago this same bookstore welcomed Canadian author Joseph Boyden, one of my favorite young writers (check out his "Three Day Road"- beautiful!). I had met him two years ago at a literary festival in the village of Fuveau near Aix where a French publishing house hosted its authors under the banner of "American contemporary literature" but exclusively in the French translation. During interviews, Boyden, Marilynne Robinson, A.M Holmes and other invited authors were assisted by a French interpreter, but at the author table seated behind piles of their books with unfamiliar French titles they were sometimes heard to ask: "Which one is that? Oh, the blue one" before signing a particular book. No such problems at his book signing in Aix.

When digging the excavation for the foundation of an apartment and office complex in the center of Marseilles earlier this year, the builder uncovered between six and eight tombs, one child-sized and the others over six feet long, which were thought to be of Greek origin. Scientists, who suspect but have yet to confirm that these are indeed Greek tombs dating from the 4th and 5th century BC, have expressed their surprise at the location of the find. According to one archeological expert: "Cemeteries were usually located outside the cities, which makes this discovery extremely interesting in the context of what we know about the Greek occupation of the area at the time. We may have to revise our map." Whatever the final outcome, these sarcophagi are similar to some found in nearby areas, with funerary urns and ashes inside, and as such are a major discovery.


Today, June 10th, is the first round of the 2-round legislative elections in France, where the socialist government of François Hollande hopes to gain a majority in Parliament. He will most certainly need that to push through a number of the reforms he has announced with as yet unspecified funding. The next round will take place on June 17th. Stay tuned...

Posted by Anne-Marie Simons at 5:53 AM