In the second round of the French legislative elections on June 17th, the Socialist party won an absolute majority in Parliament which gives President Hollande a great boost in passing his announced reforms. The voting results contained some surprises, however.


Old-timer and former Cultural Minister Jack Lang lost in Les Vosges, as did Marine Le Pen in her fiefdom of Hénin-Beaumont. Both were narrowly defeated, while young Marion Maréchal-Le Pen, Marine Le Pen's niece and Jean-Marie Le Pen's granddaughter, won convincingly in the Vaucluse. At 22, this law student became the youngest member of Parliament in France's history. François Bayrou, former presidential candidate and founder of the centrist MoDem party, lost out to the socialist challenger in a three-way battle in his district of Pyrenées-Atlantiques.

But the most shocking defeat was surely suffered by Ségolène Royal in La Rochelle, where she was soundly beaten in the second round by local dissident socialist Olivier Falorni who had refused to step aside in her favor. The outcome was no surprise and was generally seen as a tactical error by Royal and socialist party leaders for having catapulted her into Falorni's territory where this "diktat" by Paris was not appreciated.

It was a heavy blow for Royal who called this a betrayal by Falorni who won with substantial help of the center-right UMP party whose candidate had lost in the first round and was happy to block Royal's expected nomination as Speaker of the National Assembly. Seventy-five percent of Falorni's votes in La Rochelle came from the right, said Royal, which disqualifies him as a left-wing candidate.

The bombshell Twitter message from Valérie Trierweiler, François Hollande's partner, in support of Falorni certainly did not help but could not be blamed for this upset. It simply added to the miseries of Ségolène Royal whose partner of 30 years and father of her four children left her in 2005 for current girlfriend Valérie Trierweiler. Nevertheless, Royal supported Hollande throughout his presidential campaign, a favor Hollande returned when he declared his support for Royal in her face-off against Folarni -- thereby provoking Trierweiler into a fit of jealousy. Politics in France just got a little bit more complicated. 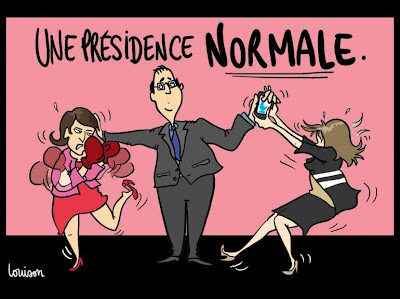 Remember the story of the withdrawal of Marseille's old ferry boat Le César in 2008?  (blog of 9/23/11). It was replaced in 2010 by a catamaran named Le Ferry Boat.  [Yes, Ferry Boat is its name, which the locals pronounce ferry bo-AHT].

The chug-a-lug César (named after the Marcel Pagnol character) had been making the short 900-ft crossing between the north and south banks of the Vieux Port for 55 years before age caught up with it and made it unsafe. The municipality decided that new technology was called for and introduced a sleek solar-powered catamaran that soon proved unable to handle the mistral wind and had to be retired from ferry duty. Red-faced City Fathers promised a solution and -- surprise! -- this week announced the return of Le César which after an extensive renovation had just passed its last test and was found fit to resume ferry service soon. But first it will be moored in front of City Hall in the Vieux Port as part of the Marcel Pagnol trilogy that actor/director Daniel Auteuil is adapting.

The catamaran will be assigned a new job of taking passengers from Le Vieux Port to the new MUCEM (Musée des Civilisations de l'Europe et de la Méditerrannée) a short distance away along the same bank, thereby avoiding the sideways gusts of wind that can apparently incapacitate it during a crossing.

The people of Marseilles are happy to welcome old César back, which to them was as much part of Marseilles as the cable car is part of San Francisco. Even if the catamaran shaved some two minutes off the crossing time, what's that to a Marseillais? Remember their motto: "Doucement le matin, pas trop vite le soir." (*)

(*) To read about Marseilles in Taking Root in Provence, click here

Posted by Anne-Marie Simons at 8:35 AM