Thirty years ago, then Minister of Culture Jack Lang introduced the Fête de la Musique in France, to be celebrated on June 21st, day of the summer solstice. Musicians of all kinds and all ages -- from symphony orchestras to one-man bands -- take over the city streets and play throughout the night to the delight of enthusiastic crowds. This popular event was soon adopted elsewhere and today is known as World Music Day in 32 countries worldwide. 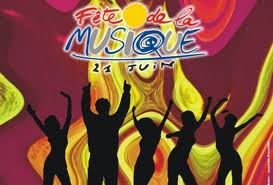 This year for the first time since its inception, musicians in Aix-en-Provence were required to obtain a license to play at the Fête and were then given a designated spot to perform. Thus, the Orchestre Philharmonique du Pays d'Aix had the Place de l'Archevêché all to itself while a hard-rock band set up its boom-boom boosters at a safe distance on the Cours Mirabeau. This was the city's solution to the cacophony of recent years when youthful enthusiasm and excessive amplification sometimes caused more pain than pleasure in some of the tighter parts of the old town with bands playing within feet of each other.

One other novelty this year:  the city appointed animators to mingle with the crowds and keep an eye out for drunkenness, while at the same time handing out free breathalizer tests, ear plugs and condoms. The condom part came as a surprise until I found out that AIDS Solidarity Day celebrated its 20th anniversary on June 21st this year.

A new book has just been published (21 June 2012) entitled "François Hollande President: 400 days behind the scenes of a victory." It is a photographic record of the campaign that identifies Stéphane Ruet as the photographer and Valérie Trierweiler as the journalist who wrote the photo captions. 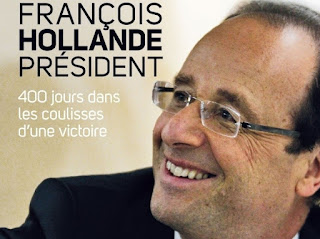 Voices have already been raised that her captions lack the neutrality of the professional journalist and are too often written in the first person singular of the narrator who, of course, does appear in a number of photos herself. "He takes me in his arms, safe from view. I cry. He laughs," she comments on the last photo. Under a photo where a smiling François Hollande and Ségolène Royal appear side by side on a stage at a rally in Rennes, she writes: "Yes, the man I love had a woman before me. [...]  I have to live with it." Royal's response in news weekly Le Point: "That's an inversion of roles. It was me whose family was wrecked" (when Hollande left her for Trierweiler), adding that it was she who might have reason to carry a grudge.


At the Rennes rally Hollande gave his supporter Ségolène a peck on the cheek, whereupon Trierweiler whispered to him : "Kiss me on the lips" and Hollande dutifully complied. The film of this scene was commented on by lip readers and the "Embrasse-moi sur la bouche" moment made the rounds of all news channels. 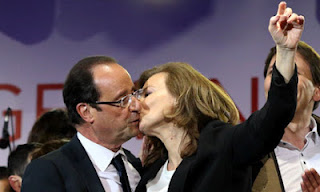 Trierweiler has not been heard from since her tweet and the prime minister's advice of greater discretion, but now that her jealousy is a matter of record she has lost credibility as a commentator on the political scene and even as an impartial observer.

Ségolène Royal, on the other hand, is picking up the pieces after her unexpected defeat in La Rochelle and will certainly be looking at a comeback of sorts. She has survived some tough battles before and managed to come out victorious after the Trierweiler attack by winning the sympathy of a majority. Quipped one observer: "Trierweiler has managed what nobody could before:  to make Ségolène Royal likeable."

These two strong characters are bound to cross paths again. Hollande may be well advised to step out of the way when they do.

Posted by Anne-Marie Simons at 2:18 PM