Valérie Trierweiler, President Hollande's partner, has created a political storm at a delicate time for the socialist party which is currently trying to obtain a parliamentary majority in the on-going legislative elections that will be decided on Sunday, June 17th. Ségolène Royal, Hollande's ex and mother of his four children, is running for re-election in the district of Poitou-Charentes where she faces a rival from her own socialist camp: Olivier Falorni. The first round was won by Royal with 32% against 29% for Falorni, but when party leaders asked him to step aside in favor of Royal he refused. The losing center-right candidate in this three-way contest has now given her backing to Falorni, which makes a win by Royal in the second round very difficult. In this context, president Hollande gave his public support to Ségolène Royal (who had been an unfailing supporter in his run for the presidency) but within hours a reportedly furious Valérie sent out a Twitter message supporting Ségolène's rival Olivier Falorni.


The left-wing daily Libération published a picture of Trierweiler under the heading "France's First Gaffe" while others questioned the "normalcy" of François Hollande who finds himself embroiled in a far from normal situation that can only have a negative impact on his image. 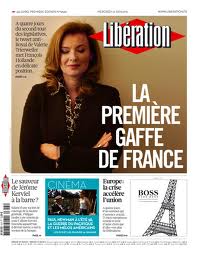 The Right is making the most of the situation, sniggering about The War of the Roses and Vaudeville coming to the Elysée, while Le Figaro states that Trierweiler's tweet has sown amazement and confusion in the socialist ranks with possibly "heavy consequences." But at the socialist party nobody is laughing. So far no official comment from Ségolène Royal other than that she wants to keep the focus on her campaign, and nervous silence from the Elysée. Barely one month into his presidency, Hollande is facing his first crisis − one not resulting from political and financial problems in the Euro-zone or beyond, but from a nasty domestic spat.

There is much at stake for Ségolène Royal who, after her presumed victory in the parliamentary elections, was promised the job of Président de l'Assemblée Générale (Speaker of the House). Her chances to get that position may have been seriously damaged. The latest polls today, June 13, indicate that Falorni has taken the lead from Royal and is currently set to beat her with 58% to her 42%.
Hold your breath until Sunday.