The Rencontres Economiques d'Aix-en-Provence (*), a three-day annual meeting of international big players, took place on July 6, 7 and 8 this year under the banner: What if the Sun also Rises in the West... The New Global Dynamics. A wide range of subjects was discussed by representatives from the worlds of finance and economics but also politics, government and industry − among them Mario Monti, Valéry Giscard d'Estaing, Hubert Védrine, Mikheil Saakashvili (President of Georgia), Mario Draghi (President of the European Central Bank) and his predecessor Jean-Claude Trichet, Pascal Lamy (WTO), as well as professors from various universities including Stanford, Berkeley, UCLA, Harvard, Columbia and Princeton. 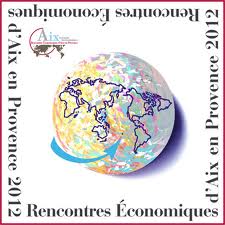 One memorable guest was Nouriel Roubini (NYU) who as usual did not mince words and painted a very bleak picture of the future. Many speakers had raised concerns about today's great imbalances, migration, out-sourcing, the role of government or industry or civil society in responding to the challenges of globalization, and of course about the crisis of the Euro in which they continued to have faith. But Mr. Roubini was unwilling to accept the "cautious optimism" that prevailed. What's there to be optimistic about? was his response. So last week in Brussels Angela Merkel finally agreed to use the European bailout funds to recapitalize struggling banks. Et alors? You have been talking for ten years and never took the necessary measures that would have avoided today's crisis. And now you are patting yourselves on the back because you took a tiny step back from the brink? Yes, that was his tone, and in case you still did not get it he predicted that Greece would leave the Eurozone in 2013, that others may do so later, and that the current situation is a slow-motion train wreck if we don't take drastic action in the next TWO WEEKS! Moreover, he sees a global perfect storm gathering and when it hits it will be worse than the 2008 financial crisis.

Doomsayer or prophet? It seems hard to believe his gloomy scenario, but we should remember that Roubini saw the American housing market's collapse coming long before it did and that he accurately predicted the financial crisis of 2008.

So what can we do? Well, if we only have two more weeks before things go to hell, I say Carpe Diem and hie for the opera. Our season got off to a great start with Mozart's Marriage of Figaro (I liked it, the Parisian press did not) and Charpentier's David and Jonathan conducted by Franco-American William Christie (I loved it, the press did too). We also saw the opening production of the theater festival in Avignon, The Master and Margarita, based on the once-banned novel of Mikhail Bulgakov, directed by English actor/director Simon McBurney and performed in the magnificent Cour d'Honneur of the Papal Palace. 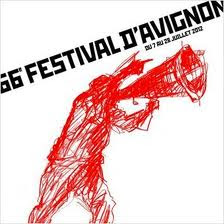 (The press: Masterpiece! - Me: Too long and convoluted, but saved by the fantastic special effects and the unique setting).

This year we celebrate the centennial of the birth of Jean Vilar (1912-1971), founder of the Avignon festival, who in his day was not universally appreciated but has achieved a god-like stature since. His dream of bringing great theatre to the people was looked on with suspicion, in particular by some Parisian intellectuals (read Sartre) who interpreted Vilar's notion of popular theatre as theatre for the proletariat. With stubborn perseverance and some savvy soothing of southern and northern sensibilities, Vilar (who was born and raised in the Mediterranean town of Sète) managed to reassure his detractors and open his first "Avignon" in 1947. Four years later he was named Director of the famous Théâtre National Populaire at the Palais Chaillot in Paris. 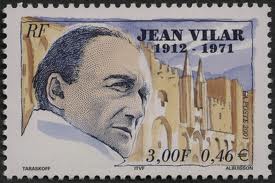 Actors loved him and he is credited with forming one of the best acting companies ever, with Maria Casarès, Jeanne Moreau, Philippe Noiret, Michel Bouquet and of course Gérard Philipe - all of whom played with him in Avignon. Today in its 66th season, the festival has grown beyond Vilar's wildest dreams and come to include a number of foreign directors (a third of all "In" plays this year are performed in a foreign language with French surtitles), and many original and avant-garde productions. Vilar famously wished the theatre to be considered a public utility, just like gas and electricity. The month-long artistic effervescence in Avignon with its thousands of devotees seems testimony to the fact that culture, including popular theatre, is indeed an essential human need.

We have four more operas to go and as many plays in Avignon as we can pack in before the end of July and hopefullly before Mr. Roubini's predicted blowup.

Another blowup − although one of lesser consequence to all of us − is the end of the Strauss-Kahn-Sinclair marriage that was announced by AFP and the French daily Libération on July 2nd, just days after the Strauss-Kahns had sued French gossip magazine Closer for invasion of privacy when they published a similar claim. Sources close to the couple have apparently confirmed that after 20 years of marriage Strauss-Kahn and Sinclair have been living separately in Paris for nearly two months now. 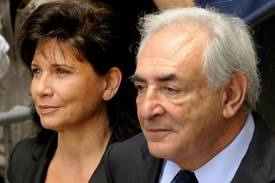 This is another setback for DSK who is still facing serious legal problems in France and the United States. Although Sinclair's decision to leave him seemed predictable and inevitable, I confess to a pinch of pity for this brilliant modern-day Icarus. I know, I know, it's his own fault, and yet... This must be what the Stockholm Syndrome is like.

Posted by Anne-Marie Simons at 8:51 AM