France celebrates its national holiday - Bastille Day - on the 14th of July. On this day in 1789 an enraged mob attacked the Bastille prison, symbol of royal power, killed its warden and, with the consent of the newly established National Assembly, burned it to the ground. The French Revolution had begun.

Today, the event is celebrated with a huge military parade as some four thousand members of all branches of the armed and civilian forces march down the Champs Elysées, with hundreds of mounted cavalry, vehicles, flyover planes and helicopters, jumping parachutists and marching bands as part of the show. And an impressive show it is as it unfurls for several hours down the most beautiful avenue in the world before an admiring crowd of thousands of spectators. Here is the France that they feel proud of, the France of La Gloire, the France that helps them forget the shameful sell-out of General Pétain to Nazi Germany. These are the victorious forces of General de Gaulle, of Bir Hakeim, of battles engraved forever in the Arc de Triomphe. It is a proud moment, this Défilé Militaire which opens a long day of festivities that end with spectacular fireworks at the Eiffel Tower which this year rocked to disco music.

Another July event is the Tour de France, a three-week-long grueling cycling race through flat and mountainous stages that include fearsome Alpine and Pyrenean passes, two individual races against the clock, and weather that can go from mountain snow to valley heat in the space of several hours. This year the Grande Boucle was nearly 3500 km long, starting in Liège, Belgium, and ending in Paris.


The 2012 Tour was won by Bradley Wiggins who wore the leader's yellow jersey for most of the Tour. His team mate and fellow Brit Chris Froome came in second, which made this a solid victory for the Sky Team and a first ever for Great Britain.

Accidents do happen and are sometimes caused by spectators who get too close or a dog that runs into the cyclers' path. It's stupid and irresponsible and, given the millions of roadside spectators, almost unavoidable. But when someone throws carpet tacks onto the road, as happened this year in the foothills of the Pyrenees, it is clearly malicious and meant to cause havoc. Fortunately, no serious injuries resulted here.


Doping scandals have long plagued the Tour de France, and this year again saw two riders (out of 198) expelled for positive drug test results. Seven-time Tour winner Lance Armstrong was disqualified from participating this year because of unresolved doping issues in the United States.

The Tour de France has a fervent kind of following that cuts across age groups and social classes, and many a French fan can cite past Tour records and winners the way Americans can spout baseball statistics. Live television coverage attracts millions of viewers worldwide, and numerous businesses (banks, insurance groups, telecom, mining, sportswear, broadcasting, the French lottery, etc.) sponsor the competing teams, while "official suppliers" eagerly hawk their products all along the route. It's a BIG business. That background hum you're hearing is not just the whine of fast-spinning wheels but the singing of cash registers as well.


This sign on a church door in Aix-en-Provence stopped me in my tracks. It reads: "The Church of St. John the Baptist will be closing for the summer. Last Sunday service on 21 July. Next service on Sunday, 12 September." I knew the French have long holidays. But the Church?... 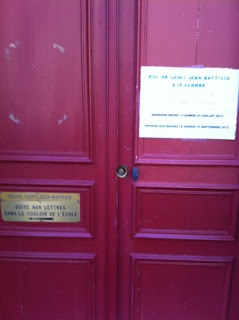 
The first serious summer fire has just claimed four lives and 23 wounded in the Franco-Spanish border area of La Junquera. The fire was fanned by very strong northwestern Tramontane winds that made the intervention of firefighting planes and helicopters impossible. The heavily travelled border-crossing highway between the French city of Perpignan and the Spanish town of Figueres was closed for hours due to thick smoke and stranded cars that were abandoned by people fleeing the approaching fires. The deaths occurred just off the French coastal road near Port Bou where people had left their cars to run down a steep hill toward the sea. A father and his 15-year old daughter jumped off a cliff to their deaths to escape the flames. Their bodies were found the next morning but the mother who jumped as well has not yet been found. Another French victim died of burns, while a Spanish man died as the result of a heart attack as he watched his house burn down. 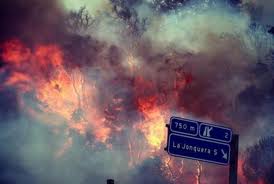 Flames leaped sky high during the night and could be seen all the way from Barcelona, 150 km away. According to Spanish press agency EFE, the fire was caused by a poorly extinguished cigarette, which - helped by strong dry winds - was all it took to torch the bone-dry countryside which had just experienced the dryest winter in 70 years. Four days after this initial spark the fire was finally declared under control on both the French and the Spanish side, after 14000 hectares had been burned.


The French daily La Provence has published a full-page article on a large feline that was recently seen in the Hautes Alpes de Provence. Five witnesses have reported seeing a black animal with a long tail and yellow eyes, which they thought might be a panther or a puma. One man in the small town of Oraison spotted the big cat drinking from his swimming pool. As he tried to photograph it, the animal sprang across a dirt road, leaving footprints of 8-10 cm in diameter in the mud. After studying the footprints, experts have ruled out a dog or a wolf but have so far not confirmed that it was a panther.


The mystery recalls the incident near Marseilles in 2004, when the entire National Park of the Calanques between Marseilles and Cassis was closed to the public for three weeks in mid-summer while a track was organized to capture the panther that turned out to be a large black cat. Ridicule was heaped on the authorities, reminding them of the famous sardine that blocked the port*.


L'Office National de la Chasse et de la Faune has been presented with the evidence, but given its mistake in Marseilles in 2004 remains cautious and has not confirmed the black panther theory. Meanwhile Michel Vittenet, the mayor of Oraison, stands by his witnesses and is convinced that this time we're not dealing with a domestic cat but with a dangerous animal that may have escaped from a circus or been released by a private owner because it was getting too big. 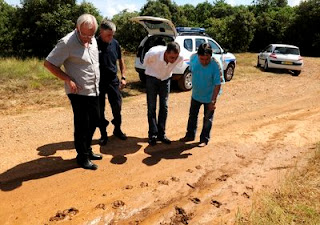 "I would rather be ridiculous than regret a serious incident later," says Vittenet.


The recent shooting in Aurora, Colorado, caused an American friend to send me the very telling statement below that, methinks, says it all. 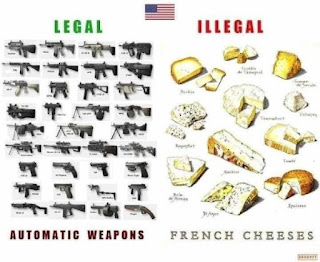 (*) To read A Long Hot Summer about the Black Panther and the Sardine in Marseilles, see my book Taking Root in Provence.  Click here.
Posted by Anne-Marie Simons at 5:26 AM